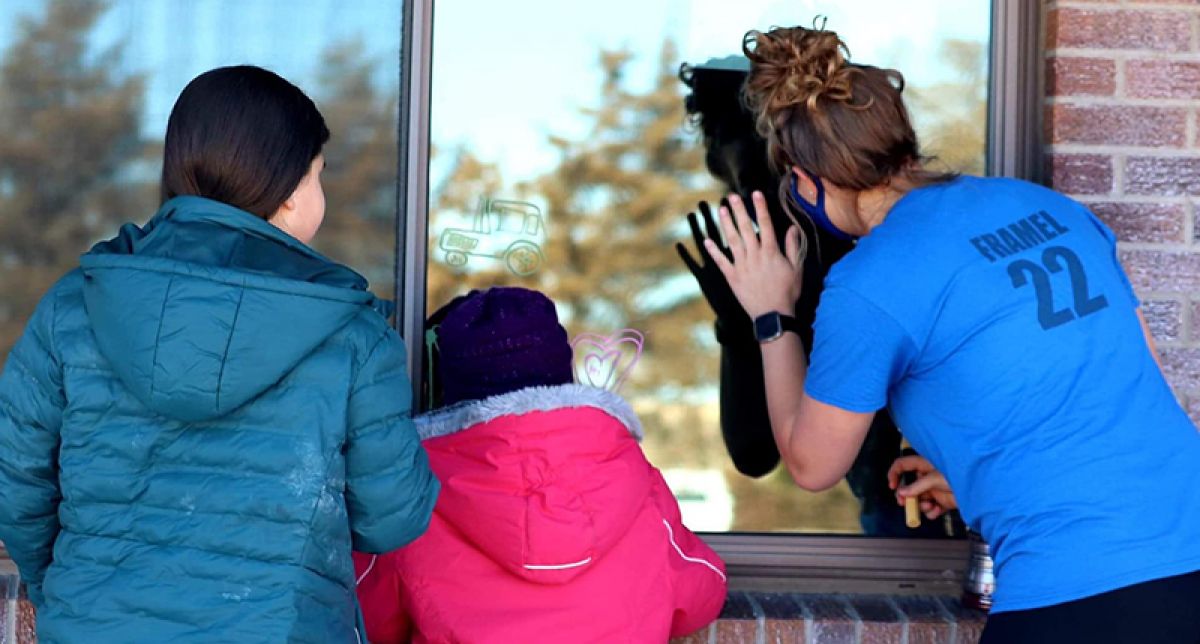 A group of high school students from Kit Carson High School worked together last week and came up with an ingenious idea that not only taught the students at Kit Carson, all ages from the Kinders to the seniors, how important the act of kindness really is, but offered up a day when the youngest generation and the oldest generation of the county came together, if not physically in the same room, then just outside the window.

During the week-long event the group organized a number of kindness activities for Kindness Week culminating with an all-school field trip to Cheyenne Manor Nursing Home in Cheyenne Wells.

Tieler Randel is a senior at Kit Carson and was one of the main catalysts in coming up with many of the ideas enjoyed during Kindness Week.  She, along with the leadership team, turned their ideas into actions that brought an experience of true awareness and love for one another to the students and senior citizens alike.

Randel described Kindness Week and what it meant personally to her when it was all over, “We wanted to do something for the Senior Citizens who have been in the nursing home during this crazy time. We did a craft each day of the week with our Little Brothers or Little Sisters and put them all together to make care packages for the nursing home residents! The care packages included decorated masks, pictures of all the kids together, Gatorades, and bookmarks. We also had the little kids decorate the bags so that each had its own personal touch. When it came time for the end of the week, I think we all were excited to get to see the Residents and give them our gifts. Personally, I was overjoyed to get to see some of my dear friends; Emma Rose Pearce who was my babysitter when I was an infant, Joyce Colvin who was my nextdoor neighbor, and Polly Johnson who has been to many of my games throughout the years. It was so amazing to get to see all of them and see their faces light up when the kids were drawing on their windows. It was even more special that we got to talk to some of them, through phone calls. I pray that this tradition will continue for many more years to come!”

According to secondary English teacher Penny Isenbart who helped to sponsor the leadership team and Kindness Week, there were 21 nursing home residents that received the many gifts given by the students from Kit Carson.  The students then spent time at each window, in small groups, decorating the window and talking through the window or on the phone with the resident.  Isenbart observed, “Both the students and the residents really seemed to enjoy conversing.  The residents were quite interested in finding out "who they belonged to".  Some got to visit with their relatives which was really nice.”  Isenbart went on to conclude, “Each group was at each window for about 5 minutes and then they rotated so that they got to visit with all the residents.”

Senior Jordayn Weeks agrees with Isenbart, “I really enjoyed getting to talk to many people in the nursing home. Although the phone calls were relatively short, it was great to say hi to everyone we could.”

All the students realized what a difficult time the oldest population, in particular, has had during the pandemic as they have been isolated and alone for many months.  Kindness Week was a chance to bring color, energy, interaction and love to those who deserve our utmost respect and regard.

Senior Cally Booker-Rady summarized the experience by saying, “I think we touched a lot of hearts during Kindness Week.  I experienced so many smiles while we were painting the senior's windows from both the littles and the elders.  It proves that the little things truly do mean so much and the simplest act of kindness is all it takes to share God's wonderful works.”