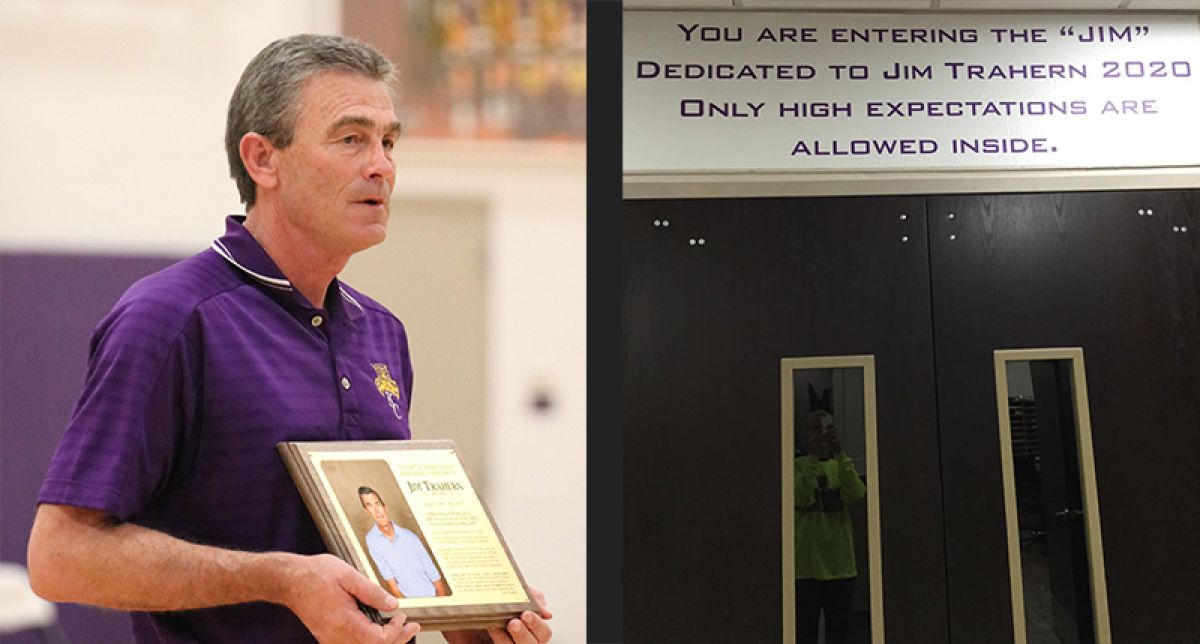 At the last home basketball game of the season over the weekend the Kit Carson School District dedicated the new gymnasium inside the newly built school building to their prolific coach, Coach Jim Trahern, and named the gymnasium in his honor.  The heading over the doorway going into the new gymnasium reads, “You Are Entering the “Jim” Dedicated to Jim Trahern 2020 – Only High Expectations Are Allowed Inside.”

Coach Trahern is well-known across Colorado as a coach who got the best out of his athletes.  He took them where they were, saw their individual potential, and then motivated and groomed them to become competitors for the Wildcats.  There was a system in place that worked creating a tradition of excellence.  It’s still in place today as the present-day Wildcat coaches have either been mentored by him or coached by him.  The Wildcats know the system --- from the Kinders to the Seniors.

Jim created a culture in Kit Carson that was built on respect.  Respect for players, coaches, officials, hard work, and must importantly, the game.  A true teacher who will be remembered for the integrity he brought to the Wildcat Community.

Trahern coached from August of 1984 until May of 2017 when he retired from education and coaching.  Through those years he accumulated a 487-216 win-loss record in Basketball at Kit Carson (494-243 overall); 191-82 win-loss record in Football including 24 playoff appearances that amounted to 11 state semifinal appearances and two runner-up finishes.

He won two state championships, both in Boys’ Basketball, in 2004 and 2007.  He was also named the Colorado High School Coaches Association (CHSCA) Coach of the Year in 2004 and was inducted into the CHSCA Hall of Fame in 2015.

Jim was surprised and quite honored inside the new gymnasium that night stating, ““I can’t even begin to express what this honor means to me. I have received many nice honors while coaching at Kit Carson, but this tops them all. I must thank the people who are largely responsible for my success and longevity. First, I thank my wife and two sons for how understanding and supportive they were. Next, thanks to the Kit Carson Board of Education, both present and past members that I had the privilege of working for. Also, a huge thank you to Mr. Gerald Keefe and Mr. Robert Framel for all their support. I also had numerous great assistant coaches who I enjoyed working with through the years. I also want to thank the numerous teachers and staff members I got to work with every day. The Kit Carson community and parents of all the players I had the honor of coaching also deserve a huge thank you. And last, but not least, to all the players I was blessed to coach everyday over my 33 years, you are the main reason I was so fortunate to receive so many honors, especially this truly special honor of the dedication of the new Kit Carson gym.”

A special letter written by former Kit Carson Superintendent Gerald Keefe was read at the ceremony.  Keefe, himself could not attend, but he made sure that the community knew just how special he considered his time working with Trahern through the years had been.

Keefe wrote, “Your influence on so many people, including myself, can’t be measured by wins alone, even though I’ll have to admit we certainly did enjoy them.  Jim you are that rare individual that truly cares about the future and well-being of everyone you meet.  Your enthusiasm, class and grace has impacted my life more than you will ever know.  I can say in all honesty that besides my parents no one has served as a better role model for me than you Coach.  I greatly thank you for that.”

Keefe continued, “Also, what an absolutely perfect name for the gymnasium.  There couldn’t have been a better choice than the “Jim.”  Well Coach I don’t want to ramble too long, so I’ll wrap it up.  Thanks for being you and for so freely sharing your many gifts and talents with so many people.  Go Wildcats and long live the “Jim.””

On the plaque that Trahern received that night is a quote by the famous basketball coach from UCLA John Wooden who wisely stated, “A good coach can change a game.  A great coach can change a life.  You must be personally reliable before you can coach your team to generate reliable results.  A great coach will make his players see what they can be rather than what they are.”

That is the legacy of Jim Trahern and now it will be remembered and practiced every time future players, coaches and fans enter the Kit Carson Wildcat “Jim.”

December 01, 2021 | Betsy Barnett | Sports
The good news for the Eads Lady Eagles, eventually at least, is that Eads returns five key players to the basketball court this year—all who have h...
Tweet