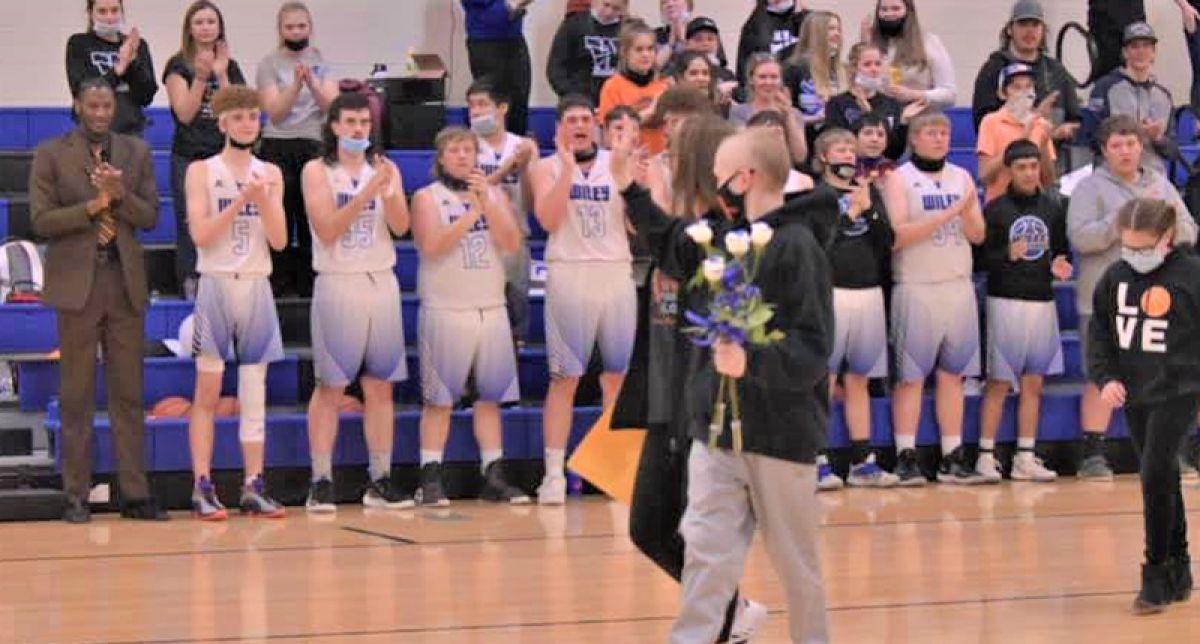 Landyn Teaches Us An Important Lesson

A few weeks ago Prowers County went into the Level Blue of the Colorado COVID Dial.  That was good news for everyone around the area, but great news for the basketball fans from Wiley and Granada who would now finally get to attend a high school game without the number limitations and restrictions.  The Wiley School then decided they wanted to celebrate something more important than the county turning Blue for the first time in months---they wanted to celebrate a true hero in Prowers County.  They wanted to welcome 12-year-old Landyn Weeks back home.

They decided Tuesday, February 23 would be the best day to recognize Landyn’s amazing strength as he continues to battle cancer --- Acute Lymphoid Leukemia, to be exact.  The visiting team Granada were also excited to join in as Landyn is well-known among all the many close-knit towns who compete against each other.

While the Wiley and Granada Schools were getting the word out and making plans for the special evening, Landyn was taking chemo treatments in Denver and, based on past experience, it looked doubtful whether he would meet the clearance levels the hospital required each time before he could leave.  But here’s why we celebrate the amazing things the human spirit can do. Here’s a lesson to us all on how to overcome obstacles.  Landyn didn’t cry about it, or quit, or pout---nope---he took the situation at hand, evaluated his options, and chose to fight back.  That fight back was a grueling day of walking the halls of the cancer unit --- four miles ---- in order to get the chemo out of his system and to the levels the hospital required in order to be released.

That kind of determination is rare, but Landyn wanted to go home, to see his friends and family, and by gosh get out there on his beloved basketball court and be a part of what was an exceptional night of what high school sports and community is all about.  These are the motivations that will help Landyn battle through this insidious illness and make it back home for the final time where he is determined he, too, will be playing basketball again one day real soon.

What follows is the statement his mother, Samantha Watts Weeks, wrote.  It was read during the ceremony on Tuesday while the high school players and fans from both teams stood and recognized a true hero:

Good evening everyone. I know most of you have heard about my son, Landyn Weeks, a 6th grader here in Wiley and that he was diagnosed with Acute Lymphoid Leukemia in September of 2020.  I was asked to share with you a little bit about Landyn and where he is in his treatment.  But first I will start at the beginning.

Landyn has been a fighter since he was born.  At 24 weeks, I went into premature labor, and the doctors did everything they could to prevent an early labor.  It worked, even though he tried a few more times after to join his family.  Early December 2008 Landyn arrived healthy and cute as a button.  Landyn has always been a busy boy.  When he was little, he never went anywhere without his cowboy boots on.  Then his interest in sports came. He enjoys playing football, basketball, and his favorite baseball.  His other hobbies include hunting with his grandad and uncle, going to work with his dad to earn his own money, playing with his little sister, playing video games with his cousin, Mason, hanging out with his friends, tormenting his mom and dad, but his all time favorite obsession is fishing.  He could sit or stand at a lake for hours casting and reeling, even if the fish aren’t biting.  In July of 2020, he studied and passed the Colorado Hunters Safety Online Course, he was so excited that he could finally go hunting.  He went dove hunting with his grandad, uncle, and cousin the weekend the season opened.  He is a pretty good shot and had a successful hunt.

Who would have known that just a few weeks after that he would be diagnosed with Leukemia.  All that energy that he had just weeks before gradually started to wear away and he became so tired.  This was not like Landyn at all, I became worried about him and something told me to get him to the doctor.  September 21, 2020 we were sent to Children’s Hospital where we would learn the very next day that he had Acute Lymphoid Leukemia.

He began his treatment just two days later.  Landyn has been through several rounds of various types of chemo since that day.  He had to stay in Denver for the 1st month of treatment, so that he was close to Children’s Hospital.  We have traveled to Denver every week except for two during this time as well. Overall, Landyn has done very well responding to the medications and treatments. We recently learned that he is allergic to platelets, but he can still get them as he just has to be given Benadryl beforehand. He has received many blood transfusions as well.  He was put in the hospital around New Years as he spiked a fever and had to get more blood and let his body recoup.  This delayed his next round by about a week.  He was discouraged as he knows that when treatment is delayed, that pushes his “end date” out a little.  He is looking forward to the day that he can say “I beat this!” But until then, he keeps smiling and fighting every step of the way.

He currently is in the Interim-Maintenance stage of treatment.  This phase includes hospital stays with a minimum of 48 hours each time.  He has currently done three of the four stays.  The first and second times he stayed for 5-6 days each time, as his body just held on to the chemo.  They push fluids the entire time they are there as the goal is to run chemo through him for 24 hours nonstop and then flush it.  If his body doesn’t get to a certain level he must stay until it does.  This 3rd time we were there on Friday, February 19th and for the first time he was able to rid the chemo within the first 48 hours and we were home by late Sunday evening surprising his little sister, Paisley, as she hugged him with tears of joy when seeing him home. He walked 4 miles in those 48 hours and worked so hard, as he knew that if he cleared, he could be here tonight to smile and thank you all for all your support and love during this difficult time.  I truly believe that Landyn is strong, but I believe his strength comes from all of you supporting and encouraging him every step of the way, and from the constant pushing from mom and dad that he has learned to “just go with it, it will be okay”.  He has learned that he has a strength greater than he ever imagined and shows perseverance everyday. With that his dad and I couldn’t be prouder.

He has definitely kept the nurses on their toes, as he enjoys tormenting them all, and they have begun to recognize us at appointments and speak about how they love seeing Landyn and his positive attitude and have also started getting even with him for his funny pranks, too.

We still have a long road ahead of us, but we are getting closer every week.  We aren’t sure what the next phase of treatment is as they only tell us once we are done with the previous phase.  We do know they predict it will be 2 years of treatment, so we are looking to be ringing the victory bell around December 2022 or January 2023 as long as we keep moving and he keeps staying strong.

I want to thank you all and all of our LandynStrong family for your continued support and love you have given all of us during this very difficult time.  We are just going to stay strong, keep Landyn strong, and keep him smiling and healthy, and determined to beat this cancer.  We miss seeing all of you and being at school more than you know, but we will be back soon.  Thank you all from the bottom of our hearts!  “In this family, no one fights alone!”