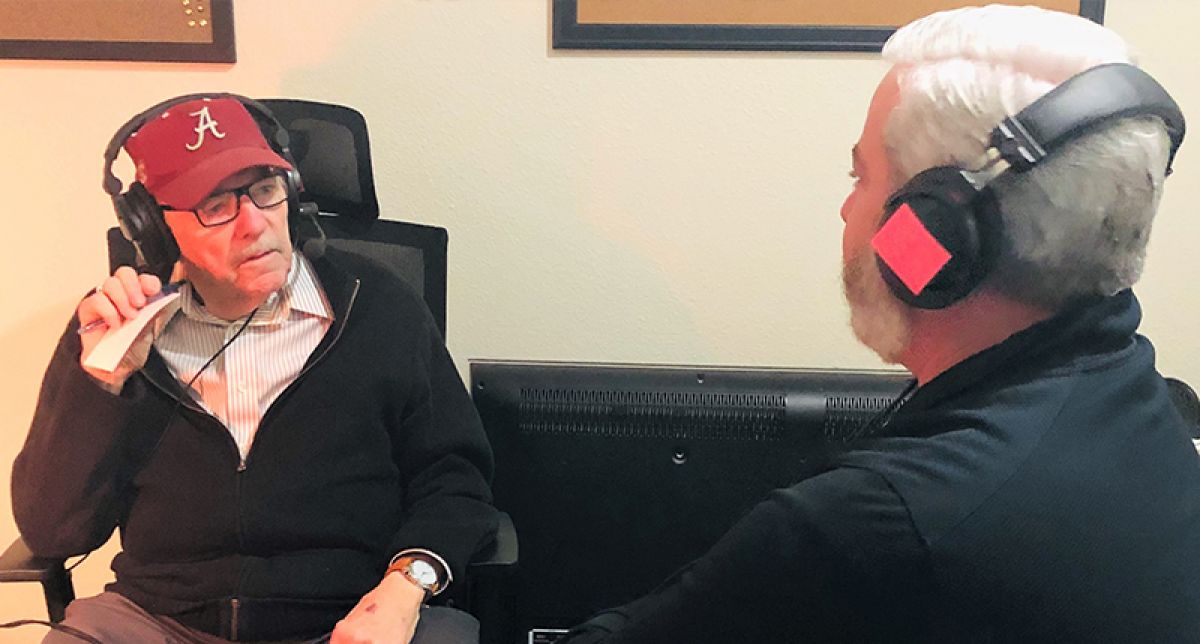 As Time Goes By: A Locally-Produced Podcast is Launched

If I told you, dear readers, that a local podcast has been launched in Eads, Colorado by Rich O’Brian you might say, “Who?”  But when I say, Rich is that upbeat older gentleman you see around town who is always wearing the Alabama Crimson Tide cap, then you’re bound to say, “Oh, yeah, that guy.  I know him.”  Nevertheless, if you don’t know him yet, you are bound to know who Mr. O’Brian is in the very near future.

Rich has been writing in the Lifestyles section of the Independent now for a few months.  The column entitled As Time Goes By is an interesting collection of his observations as he and his wife navigate their new adventure of small-town living having moved to Eads about a year ago.  And, since the time Rich began making weekly column submittals to the publisher of the Independent, he has also inquired just about every week as to whether it was time to figure out how to launch a podcast for the community of Eads.  Rich was tenacious, as successful people are, and finally all the pieces and parts came together where Rich O’Brian has now launched his new podcast on Spotify, for now, entitled appropriately, As Time Goes By.

Although most of the terms and procedures of podcasting are lost to Rich who just turned, well dare we say a mature age, a few weeks ago, the basic premise of folksy conversation, sincere interest in what people have to say, and an astute ability to discuss just about any topic under the sun with any person that walks in the new recording studio at the Independent is mostly what is needed to host a podcast.

Rich’s ability to conduct such impressive interviews and discussions stems from his years in radio and TV broadcast.  From the 1970s through the early 1990s, O’Brian worked as a news anchor at a handful of local TV News outlets throughout the Midwest.  He was a natural interviewing such individuals as Dan Rather, Sam Brownback, Ronald Reagan, Buck O’Neill, Meadowlark Lemon and Dick Cheney, to name a few.  Now, in his retirement years O’Brian is still called to the radio, but this time on his own terms, in his own affiliate, called podcasting in the 21st Century.

O’Brian believes, “Podcasting,” he chuckles and asks if that is a verb, “Seems to be the new way to promote people.  A way to still conduct interviews of people in our community who are doing things.  It used to be, I interviewed the Sheriff or the school principal or a coach heading to a big game, or the politician running for office.  I think Eads and southeastern Colorado is full of people who are interesting and have a story to tell.”

For Rich, that is what this podcast project is all about.  He wants to promote Eads, what’s going on in the area, and interview people who are interesting.  Rich contends, “Everyone is interesting and has something important to say.”

As may be evident, Rich O’Brian is a go-getter.  But he knew he was quite limited in the world of computers, links, apps, and recording tools like what Spotify provides.  He knew he had to find the modern-day broadcast engineer.  And he went out looking.  And he found a guy---a high school kid named Caleb Lane who was willing to show the ‘ole guy a trick or two on the computer.  Between the two unlikely partners they have worked together to develop the podcast’s theme, intro music, cover, and programming.  Rich has the vision and Caleb is a whiz kid on the computer.

The other day, the As Time Goes By podcast interviewed a well-known gentleman in town by the name of Matt Prince who is the owner/operator of CWC Rail, Inc.  Prince was kind enough to come to the recording studio inside the office of the Independent where he met Rich and his capable engineer, Caleb, and they then sat down for a conversation.

Rich has a beautiful way of holding a folksy interview and with Prince they talked about the development of the railroad going through Kiowa County and then switched gears discussing the upcoming Agriculture Appreciation Day on Saturday, March 20 that Prince is helping to promote.

If you want to know more about that event and listen to an expert talking about our local railroad, then tune into As Time Goes By with Rich O’Brian on Spotify, become a follower, and get notifications when new programming is available.

Rich says he wants to go live every Monday morning at 10 am so look for new chapters of the podcast at that time.  The QR Code provided in this article will take you to the As Time Goes By channel.  For you rather mature listeners, Caleb says, “You’ll need to download the Spotify app, make an account, search for the name of the podcast (As Time Goes By with Rich O’Brian) and click FOLLOW.”

Yep, that’s all there is to it.  But once you navigate this new technology, you’re going to learn a lot about your own community.  Rich will, no doubt, make sure of that.