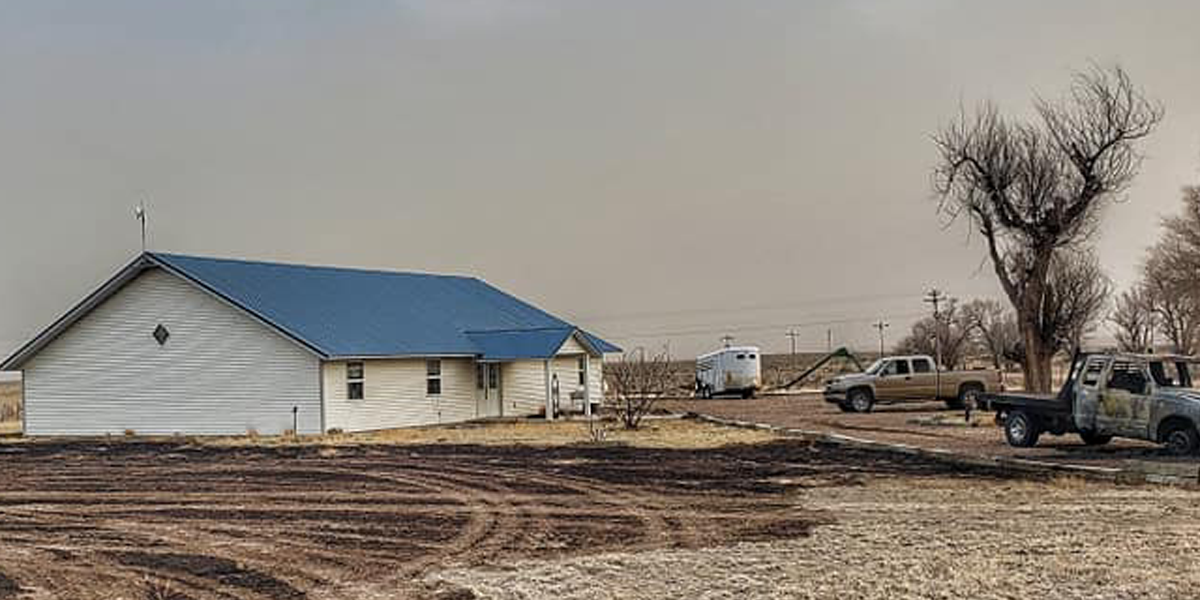 Last Monday the wind was howling out of the west and the dirt across Kiowa County was rolling up into the air.  These are the days that put fear into the heart of the community as fires are a real danger in such conditions.  Soon, sirens started being heard as the fire trucks rushed out of town heading east.
According to Kiowa County Fire Protection District Fire Chief A.J. McCracken, “We got the call at 15:49 pm and headed out immediately toward Chivington, near the Chivington Friends Church, with the report of a truck fire.  These types of calls with the kind of weather we had going on Monday are very concerning.”
When they arrived, there was a pickup truck on fire in the parking lot of the Chivington Friends Church and flames had spread from the truck to the dry grass in the front and side yards of the church.  “When we got there, the fire had already spread across the yard and had advanced to the field east of the Church.”
McCracken said the fire had burned the entire yard but had seemed to have burned around the large cross display in the middle of the yard, leaving not only the cross itself intact, but also the wood ties that were placed at the base of the cross as a support barrier.  “The fire had also burned right to the edge of the church, literally within inches, but then blew east and didn’t affect the church building at all.”
Ty Lin Williams, a long-time member of the church, was astonished by the path of the fire and the fact her beloved church and the cross outside were not touched.  “I was told a couple of people worked to protect the church including David Marble, whose pickup caught on fire, and Brock Shalberg, who had been driving by and stopped to help.  I was told Teresa Brown, who lives nearby, was there too.”
Williams continues, “But the weird thing was the water at the church was off due to a leak in the ladies’ bathroom. So, to me, it truly is a miracle. It made me want to cry when I got there after practice. I told my kids that God performed a miracle and I know that Gilbert Brown was there in spirit too helping to protect his beloved church he attended for years. I am so thankful and grateful that there were people there helping.”
This Easter miracle wasn’t the first truly remarkable incident that the Chivington Friends Church has been involved in.  Back in April 2012 a tornado ripped through Chivington and destroyed the Church Parsonage as well as some of the Church itself.  At the time, the congregation had been unsuccessfully trying to raise funds to build a new church since the old one was falling in disrepair. Their plans had been pushed to the back burner.  When the parishioners went into the church after the tornado the inner sanctuary was a chaotic mess with debris strown all around.  However, on the piano a hymnal was still standing with a page turned showing the song title, “Why Not Now?”  The new church was completed a couple of years later.
This particular fire was also interesting in the fact that, with the wind, it was quickly able to jump the highway and head up the field toward the northeast where the sacred Native American grounds of the Sand Creek Massacre National Historic Site is located.
According to McCracken, “When it jumped the highway, we had our hands full trying to contain it before it really got going.  These were perfect conditions for a fire given the dry terrain and the strong winds.  I give full credit to my crew and the departments who came immediately when we put the word out.”
Numerous agencies provided mutual aid to Kiowa County responding immediately upon request including Kit Carson, Cheyenne Wells, Wiley, and Prowers County Fire Protection District.  The Kiowa County Sheriff’s Department and Emergency Management were also on the scene.
With the professional work of the Kiowa County Fire Protection District and assistance from neighboring districts, the fire was stopped just before it got out of hand.  The crews were fighting the fire on both sides of the highway against 20-25 mph winds and among very dry vegetational conditions.
“Thankfully, only a small section of a couple of fences and approximately 5 acres of land was destroyed by the fire,” according to McCracken, “And the fact that the church wasn’t touched is also very good news.”
That Monday was the beginning of Holy Week across the world and in Kiowa County a miracle may have  occurred when the Chivington Friends Church and its beloved cross were somehow spared from destruction of fire.  But even further, the sacred grounds of the Native Americans were spared.  One final miracle exists in the fact that we here in Kiowa County and neighboring counties have a group of dedicated fire fighters whose professional and skilled work keeps our property and loved ones safe and secure every single day.