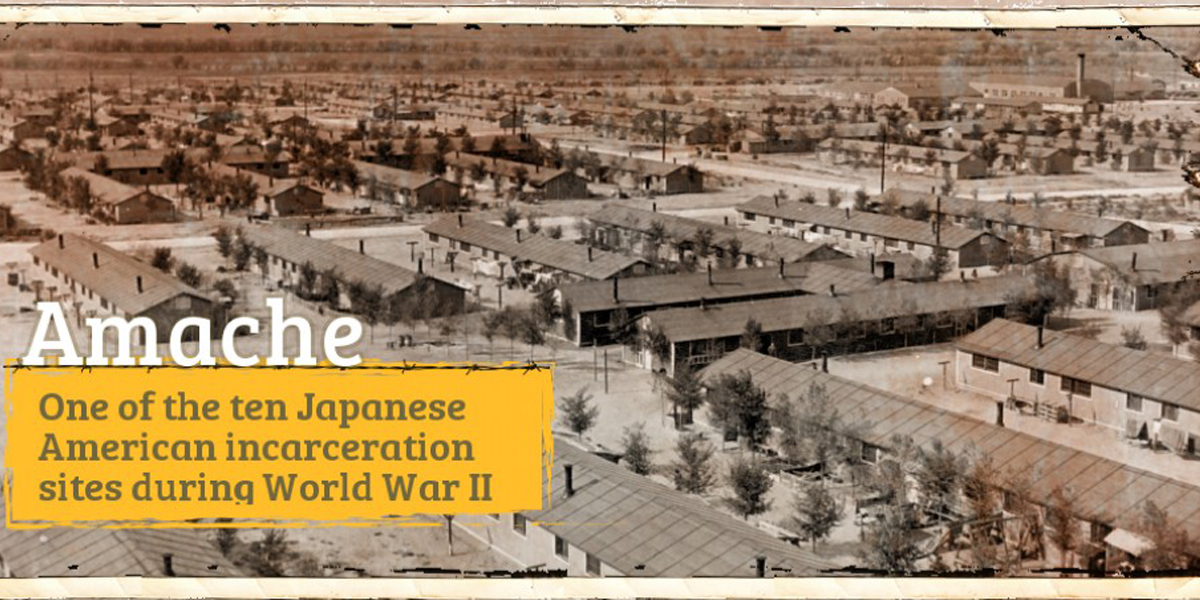 Two Colorado congressmen have renewed efforts to put the Granada Relocation Center – also known as Camp Amache – where many feel it belongs.
Bi-partisan legislation that would make Camp Amache a National Historic Site has been introduced by Congressman Joe Neguse (D-District 2), Chair of the U.S. House Sub-committee on National Parks, Forests and Public Lands, and co-sponsored by Congressman Ken Buck (R-District 4).
Passage of H.R.2497 would be the first step in bringing the roughly 7,000 acres that make up Camp Amache into the National Park system.
This is not the first effort to make Camp Amache a national historic site. Legislation introduced by Senators Cory Gardner (CO-R) and Michael Bennet (CO-D) and Congressman Buck was taking steps toward that end when it was signed into law in 2019 as part of the Dingell Conservation Act.  The first step would have been to call for a study of the site, which can be a very lengthy, complicated and time-consuming process.
When the pandemic hit, it caused numerous, unavoidable delays to countless projects, including the Amache Study, as the process was destined to take longer and longer. The recently introduced Amache National Historic Act will fast track the steps involved.
If passed, the legislation will allow for mapping, purchase of the site from the town of Granada -- who currently owns the land – and planning to begin almost immediately after the bill is signed into law.
In his statement announcing the bill, Congressman Neguse said, “The recent surge in anti-Asian hate crimes and discrimination is deeply troubling. As we work to address it, it’s critical we remember our nation’s history, so we may honor, educate and heal. The unjustifiable internment of Japanese Americans is no doubt one of the darkest scars in our country’s history.”
Neguse went on to say, “With the Amache site in Colorado, it is also a deeply personal history for Colorado,” Congressman Joe Neguse said. “Designation of the Amache site in southeast Colorado as a National Park, will provide education for future generations, as well as healing and honor to those that lived it. It is our hope that preservation of this site will provide reconciliation for our communities and for the nation.”
Congressman Buck, within whose district Camp Amache is located, said, “I am proud to introduce the Amache National Historic Act with Representative Neguse because it is so important that we remember the injustices committed against Japanese Americans. The nation is better today because of the lessons we have learned from our past. Preserving Amache serves as one of those hard lessons for the people of Eastern Colorado and the rest of our nation.”
“I hope that Congress will pass the Amache legislation to build on Congress’s bipartisan leadership to acknowledge that what happened to Japanese Americans was wrong and to help us live as one nation, indivisible, with liberty and justice for all,” Mike Honda, former member of Congress and Amache survivor, said.
“We strongly support the Amache National Historic Site Act. This legislation will preserve and memorialize a site that has the power to shed light upon a mistake we must remember, recall the service and sacrifice of the 442nd Regimental Combat Team and celebrate the Constitutional vision of Colorado Governor Ralph Carr. All these things are worthy of doing and doing so will make us better American Citizens,” Calvin Taro Hada, president of the Japanese American Association of Colorado, said.
However, the reaction of great interest to local residents and others associated with the site is that of John Hopper, the Granada High School teacher who, along with his students in 1993, took on the extra-curricular project of restoring Camp Amache as both an educational and historic site.
From maintaining the grounds, mowing the property (with his own lawnmower using his own gas) after school and during the summers to working with students who learned previously unknown and extraordinary history about their own area to helping them connect with individuals and learn stories from those who had personal experiences and family stories from the time when the camp was operational to then collaborating and partnering with both those who had lived in the camp and their descendants plus other groups who had developed an interest, John Hopper has been one of the people who has been there with Camp Amache through the entire journey that’s been three decades long.
When asked how he felt about the Amache National Historic Act, Hopper said, “How do I feel? Wonderful. We now have many buildings and other items that need TLC, and some of it is best to leave to the professionals such as scaling a 125' water tower to repaint and repair. Also, this will help with the entire southeastern part of Colorado. With Sand Creek and Bents Fort, [Camp Amache] will increase viewership of all three.”
The three national historic sites mentioned by John Hopper are considered to be among the National Park Service’s most historically unique historic sites in the nation. In the opinion of many, it is past time for Camp Amache to take its rightful place, not just as a national historic site within the National Park Service but also in the greater education, understanding and acknowledgement of the nation’s history, as well.