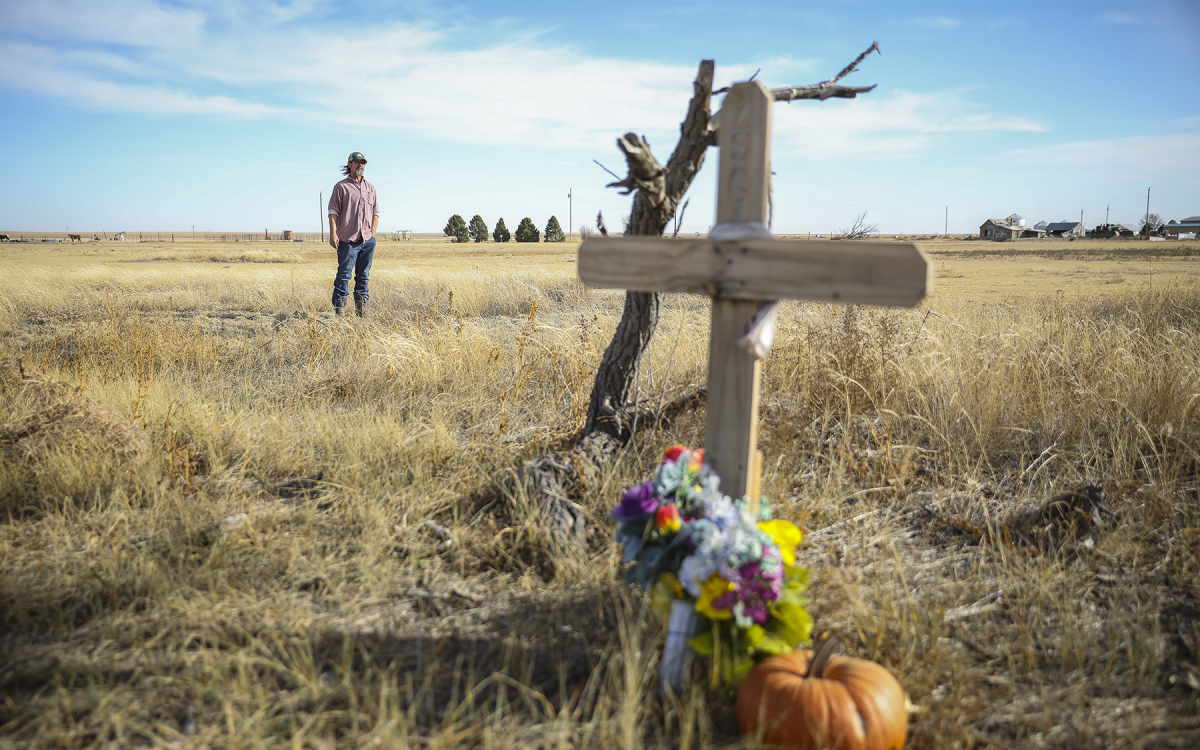 In closing arguments on Friday, April 30, 2021 Fifteenth Judicial District Attorney Josh Vogel stated, “This defendant intended to kill.”
During the more than five hours of preliminary hearing testimony Vogel presented a large amount of evidence against Stump including body camera video, audio and video of multiple interviews with the defendant, photos of the scene and testimony from three investigators involved in the case.

Stump’s defense attorney, Cynthia McKedy of Colorado Springs stated in closing arguments that DA Vogel failed to meet mens rea, or criminal intent, with the evidence presented.  She went on to argue that the second officer involved in the shooting, former Kiowa County Undersheriff Tracy Weisenhorn, escalated the situation.  Further, her client did not knowingly kill Gifford.  Instead, he saw Gifford as a threat to himself, Weisenhorn, and possibly citizens in the community of Brandon.  She closed by saying, “If his (Stump’s) action was unjustified, so was hers.”

Throughout the preliminary hearing Vogel called a number of witnesses including Prowers County Undersheriff Samuel Fief who responded to the April 9, 2020 scene in Brandon with the understanding that two officers from the Kiowa County Sheriff’s Department had been involved in an officer-involved shooting.  Fief stated, “I was the first one on the scene.  As I arrived, I saw a marked Kiowa County car, an unmarked SUV and a dark green pickup facing south on Main Street in Brandon.”

Fief secured the uniforms and service weapons from the two involved officers.  Fief stated Stump had pepper spray stored in his uniform but did not use it.  The seized firearms, .40 caliber Smith & Wesson handguns, both contained three magazines.  Stump’s weapon had 2 rounds missing, as did Weisenhorn’s.

Vogel’s second witness was Sargent Juan Rodriguez of the Prowers County Sheriff Department who was called to the scene to secure the evidence and conduct initial interviews.  Rodriguez’s body camera video was submitted into evidence by Vogel.  It depicted interviews conducted with Stump, Weisenhorn and the witness, Bryan Morrell.

In Stump’s initial interview with Rodriguez at the scene, he described arriving at the traffic stop that Weisenhorn had initiated.  Stump states he felt both Morrell’s and Gifford’s actions were somewhat suspicious but talked to both of them while Weisenhorn ran their information.  Weisenhorn returned to the pickup and asked them both to step out of the vehicle and come to the back behind the pickup bed.  During the ensuing pat down where Weisenhorn checked Morrell and Stump checked Gifford, Stump tells Rodriguez he felt a box cutter on his left hip and a lighter in his left back pocket.  There was also a sheathed tool and a measuring tape attached to his right hip. Stump left all of those items.

Stump is not clear whether he sees or feels with his finger inside the right coin pocket a clear plastic bag.  At that point, Stump says, “Don’t move, Zach.”  Gifford then begins to struggle to get away.

Stump then tries to describe what happens next.  “I get him in a head lock, and we go to the ground.”  Stump then goes through a brief description of Gifford struggling and the two officers trying to gain control by first deploying both tasers.  He tells Rodriguez that during the struggle Weisenhorn states, “He’s reaching for something,” and also tells Gifford, “Stop, Zach, I will shoot you.”

Stump then tells Rodriquez, “I fired one more shot and he fell.”

Body cam video from both Deputy Stump and Undersheriff Weisenhorn was submitted for evidence by Vogel and published in the court room during deliberations.
The body cam footage depicts a scene that immediately escalated the second Stump seemingly either feels or sees the plastic baggie in Gifford’s coin pocket and tells him not to move.  Stump at no point tells Weisenhorn what he has found.

The next 48 seconds shows Stump and Gifford wrestling on the ground with Gifford screaming when both officers tase him.  Weisenhorn is yelling at Gifford telling him, “Stop moving, give me your hands, stop.”  At that point Weisenhorn’s camera is knocked off, still running, and captures her cursing and telling Gifford she was going to shoot him.   Stump then tells Weisenhorn, “Let him go, let him go.”  She replies, “No, he’s grabbing for something.”

As Stump backs away from Gifford, saying in a later video interview, “He was extremely strong,” Weisenhorn can be heard saying, “I’m going to shoot you. Stop.”  Gifford, on his knees is reaching for his waistband, and Weisenhorn, on her knees behind Gifford has her gun drawn on his back.  Stump then draws his gun.

Gifford then stands and starts to run as Weisenhorn grabs unsuccessfully at him trying to stop him.  She then stands, and the camera on the ground captures her yelling, “Stop,” and then she fires her gun.  Stump is out of view of the camera but is heard yelling, “Zach!” followed by a second gunshot.  Two seconds later, a third gun shot is heard.

Eighteen seconds later the final shot is heard.  Stump and Weisenhorn both stated in recorded interviews that Stump fired the fourth shot.
Vogel then enters into evidence CBI lab reports on the ballistic evidence collected at the scene, as well as the 11-page Autopsy Report describing the injuries Gifford sustained including 3 gunshot wounds.

All gunshot wounds were from back to front, all from the same caliber of weapon.  Wound #1 entered to the right of the spine in the upper back and perforated the lung then exited out of the front.  Wound #3 entered the lower back, went through the intestines and stomach and then exited out the front.  Wound #2 was called the graze wound as it caused a deep laceration in the hip area and moved from left to right.

Wound #1 was considered the most serious.  Wound #2, the graze wound, was determined by Vogel to receive the assault with a deadly weapon charge.  It could not be determined whose weapon, Stump’s or Weisenhorn’s, caused Wound #1 and #3.This analysis was key to the ultimate charges in the case.

The final witness of the day was Colorado Bureau of Investigation Agent Derek Graham who interviewed both officers multiple times.   Vogel entered into evidence a series of video interviews conducted with Stump first on April 13 and then again on May 5.  Another interview video on May 5 was presented that was a walk through at the scene.
During the interviews Stump maintains he could never see Gifford’s hands as he held them to his stomach or waistline area even when he had started running away.  In his initial interview he said he took the final shot because Gifford had committed a crime by assaulting a police officer.  He was also concerned about the elderly population in Brandon who were in their houses because of the Corona virus.

The interviews changed somewhat as Stump stated he feared for his life, he wasn’t sure Gifford had a weapon because he never saw his hands, although he was the one who had originally patted Gifford down, and he didn’t want Gifford to get away and cause a hostage situation in the community.

Vogel also questioned Agent Graham about the vascular restraint, or Carotid hold, Stump had tried to use on Gifford in order to control him.  Graham said, “He didn’t do it correctly and it was used in the wrong situation.”

On cross examination with Graham, McKedy concentrated on Stump’s lack of training and lack of experience as observed by Graham.  She also goes over the sequence of events in detail and asks multiple questions on Weisenhorn’s performance as well.

During the cross examination, Graham states, “We can’t contribute the through shots to either one of them.”

In the closing arguments Vogel pointed to evidence about the final shot that Stump took.  He pointed out Stump’s reasoning changed over time and was “far-fetched.”  Vogel also described the isolation and large distances at the scene and said Stump made “spectacular conjunctures” about what he thought Gifford was going to possibly be able to do if he got away.

Vogel went on to talk about the pat down Stump performed on Gifford.  Vogel points out that Stump’s conjecture that he feared for his life doesn’t hold up because, “He knows everything that was on Zach.”

The defense argued that Stump’s pat down was quickly done, and he didn’t know everything Gifford had on him.  McKedy further stated that Weisenhorn escalated the situation and at one point yelled, “He’s got a g___.” (not clear or fully stated).

McKedy then stated, “You have failed to meet mens rea, (intent).  The defendant did not knowingly kill Zach.  He saw a threat.  If his actions are unjustified, so are hers (Weisenhorn’s).”

When Vogel came in on the last argument, he addressed McKedy’s assertations saying, “Weisenhorn knew nothing, and Stump knows everything that Gifford had in reference to the pat down.”  Vogel went further saying, “Stump, when using his pinky to reveal the plastic baggy in the coin pocket, entered constitutionally protected area.”

Vogel wrapped up by summarizing the evidence.  There’s no assertion that Gifford tried to use a weapon.  Stump knows what’s in his pocket.  Stump never used his OC Spray.  Mr. Gifford’s movement is never toward Stump but rather trying to move away.  Stump chases down Gifford knowing he has been hit, then stops, spots up and fires.
Vogel brought that point home by asking, “What could he have done?”  He answered his own question by saying Stump could have continued the chase knowing Gifford had already been hit, or he could have run back to his car and chased Gifford down.

Vogel finished by stating, “This defendant intended to kill.  That is probable cause.”

Judge Michael Davidson agreed with Vogel and arraignment was set for June 3 in person at the Kiowa County Courthouse.

Information added later: Stump's bond was changed to include the restriction of firearms. His attorney had until 4 pm Tuesday May 5 to contact the bondsman to file the proper paperwork.