At their regularly scheduled meeting on Tuesday, July 13 the Eads Town Council met with Robert A. Caffarelli, President & CEO of Carrothers Construction Company, LLC.  This company specializes in building swimming pools in small municipalities across rural Kansas.  After the information was presented and questions answered, it appeared the Town is prepared to move forward to the next step in building a new swimming pool.

There was a large number of citizens and presenters sitting in on the Town Council meeting on Tuesday.  All board members were present except for Justin McLoud who was out of town on a family issue.  Amanda Brown, the Town’s auditor, gave a positive audit report to the board stating she was providing a clean opinion for the 2020 audit.  In fact, according to Brown, the Town had not expended their budget in any of the main funds including within the General Fund, Utility Fund and Water Fund.  She further suggested they should consider putting the excess funds of $346,000 in a bank Certificate of Deposit saying, “It doesn’t pay much but it is better than having it sit and not make the Town any revenue.”  Some concerns voiced by Brown included the fact that the Conservation Trust report had not been filed in order for the Town to receive their annual funding.  The board approved the report from Brown with no changes.

Brown then informed the board that she would be resigning as the Town auditor.  She then proposed she could provide some consulting services on budget creation, for example, but the Town will now have to go out and hire a new auditor for the upcoming year.  The board thanked Brown for her years of work and stated they would consider hiring her for consulting.  No action was taken. 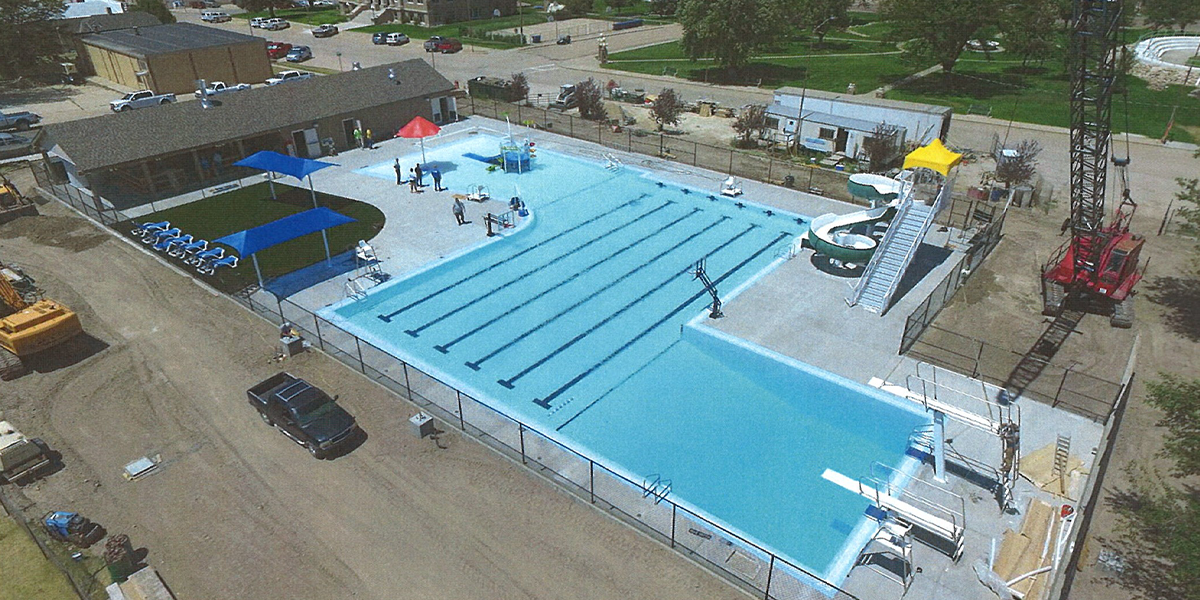 A larger municipal swimming pool project in St. Francis, KS
finished in 2017 that cost $2.2 million and is 6,700 square feet
and loaded with a number of state-of-the-art water features.
- Carrothers Contruction Company, LLC

The discussion then turned to the ongoing problem of trying to figure out how to build a new swimming pool in Eads.  The board welcomed Robert Caffarelli who then presented information about his company and what kinds of projects they have accomplished in Kansas.  Carrothers Construction Company, LLC  has been in the business for 100 years and in that time built 300 municipal pools mostly in Kansas.  Some of the projects they have worked on included a 3,864 square foot pool in Montezuma, Kansas completed in May of 2020.  That pool featured a zero-depth entry, vortex waterslide, rain drop, tot slide, 1-meter diving board, spray features and shade structures for a total cost of $1,558.792.  A larger project in Belleville, Kansas completed in 2016 featured a 4,968 square foot pool with zero-depth entry, open flume waterslide, 4-lane lap area, shade structures, 1-meter diving board, 3-meter diving board, tot slide and water basketball goal that cost $1,712,575.  Both projects included construction of the pool house and external landscaping, fencing, etc.

Caffarelli told the council the first thing they need to do is have a couple of his people come out to Eads and complete a thorough survey on what we have in the way of the property, left over assets that might be used in the new project, such as the relatively new heater that is still in the old pool basement, and determine what features and design the community wants.   The survey will consider different plans based on location and model of pool.  In addition, Carrothers will provide a cost analysis for the project.

At this point in the conversation, Mayor Shields mentioned that he hoped the Town could get community contractors and citizens to provide labor and equipment to dig the pool and do the dirt work.  Cement work could also be done by local contractors.  He also hoped the pool building could be built by local individuals donating their skills and time and the Town would pay for the materials.

Caffarelli confirmed that the in-kind community work would be acceptable with his company and the general contractor.  Further, Caffarelli said his company will often times help communities with fundraisers for the project.

A question came from the Independent as to where the Town wants to build the pool.  Mayor Shields stated he thought it was still being located at the lot on the corner of 14th Street and Goff Street just south of the old Bartlett Elevator and the City Park.  The board at this time is solid with that location.

Before leaving, Caffarelli said he will be happy to come back to Eads if need be if they want to meet with the community.  After their survey is completed, they will prepare a detailed budget that the Town can take to the community.  He plans on the survey to begin next month and will coordinate with Town Clerk Robin Fox.

Although, the council never looked at the information pamphlet that Caffarelli had provided, there are a number of swimming pool and facility plans in the pamphlet that would represent a huge improvement to the old facility Eads has had since it was built in 1954.  The old pool had a diving board and was approximately 1,250 square feet.  It was adequate for nearly 70 years.  But the pool designs of today that are now an option for Eads includes many more inclusive and modern features that should attract children and adults from not only the community but throughout the area.

October 06, 2022 | Administrator | News
The Kiowa County Farm Bureau has been instrumental in lining up an NRA certified defensive pistol class to be held in Eads staring on October 21st....

October 06, 2022 | Administrator | News
The Colorado Health Foundation graciously provided the Cheyenne County School District with a planning grant in the amount of $35,000. The Colorado...