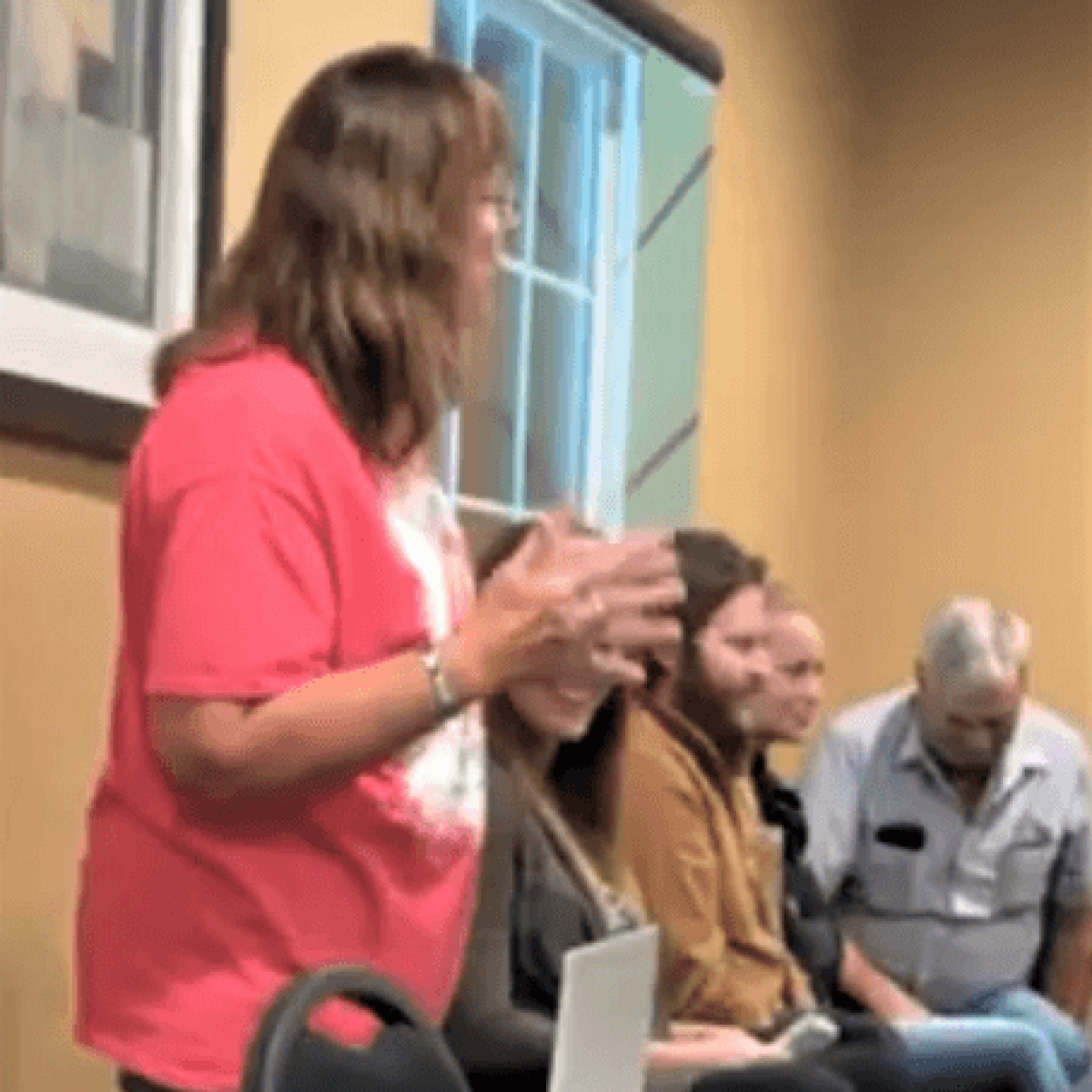 Hospital Board Decision Results in Major Fall Out of Leadership

By the end of the day on Wednesday, the Kiowa County Hospital District lost a provider, the Chief Operating Officer, the Chief of Staff, a clinic manager and an elected board member.

The drama began last Tuesday when the Kiowa County Hospital Board met in a regularly scheduled meeting at the Cobblestone Inn meeting room. This meeting, however, was anything but regular as a large number of angry healthcare workers and community members showed up and demanded to be heard after the sudden resignation of Michael Archer, NP.

Some 40 people made it into the meeting room with the intention of making a statement about their concerns over the Archer resignation and ongoing struggles within the clinic and hospital. Lab Manager Gloria Trosper told the crowd she loves working at the KCHD lab. However, Trosper questioned, “What are we going to do? We have no plan. We have no information. We’ve been through a lot of providers. We aren’t working as a family. I want us to come back to being a great hospital. You keep telling us you hear us, but you don’t.”

Another healthcare worker asked, “Why can’t we keep providers? I’ve never seen so many people upset. The employees are scared.”

Jean Diorio-Seriven is a former nurse in Eads who is now retired, but who still fills in as needed. She said she has been in healthcare for 30 years and has never seen such turmoil. “Michael’s departure was abrupt, and no one was told about it. There are medication situations left undone. I didn’t get a letter, a phone call, nothing. This does not put trust within a community.” Diorio-Seriven went on to point to a failing administration, “They are secretive, they respond to hearsay over fact, there is backstabbing going on. Some of the providers and locums have a hard time working here.”

Numerous community members also stood up in Archer’s defense and asked the board what our community is going to do without providers. Diane Billheimer from Haswell told the crowd how Archer saved her husband’s life after an accidental gun shot wound in the leg. “He didn’t know a gun shot victim was coming in. But his experience in Afghanistan and Iraq must have helped him because he did what was needed to be done to save my husband.”

Community member Monica Uhland stood up and stated that as much as they hated to do it, they would now be going to the Tribune Hospital with her parents. “We loved Michael. We keep losing providers. We also just lost a great math teacher when the Archers left—and we lost kids out of the school. I’m very scared if we lose our hospital our community won’t survive.”

Bernie Thomas, a businessman from Amarillo who moved to the community a couple of years ago said he didn’t know what was going on, but losing Archer was devastating to him. “The more he talked to me the smarter he got.”

Finally, a number of the employees questioned the board as to their intentions on hiring Pathways in order to come in and help with the situation. One employee said, “We told Pathways the truth. Now we all have a bullseye on our back.”

Other employees asked the board to consider the costs associated with losing someone like Archer. They urged the board to hire Pathways in order to help get the district’s problems resolved.

A number of employees were not able to attend including hospital Chief Executive Officer (CEO) Charlene Korrell and Director of Nurses (DON) Ellen Lane, both of whom were able to sign into the meeting through a zoom link.

After the public comment section and the regular business, the board went into executive session to discuss the Pathways Health contract that had been on the agenda. At that point everyone left for the night, and the board deliberated for nearly another hour.

The board then came out of the executive session and voted on two action items. First, the board voted unanimously to put CEO Charlene Korrell on paid administrative leave until December 3. The second motion involved a final decision to hire the Pathways Health group in a six-month contract at a substantial cost to the district in order to help get the district operational structure back on its feet. After a confusing discussion on the board’s part, the vote was 8-1 to hire Pathways. Former board chairman Sylvia Shields was the only member to vote in the negative.

These surprise moves were welcomed by many in the workforce, but also caused concern in the minds of others. The board’s actions were livestreamed on the Independent’s Facebook page that was watched by upwards of 200 people earlier in the evening. The fallout from the board’s two action items was almost immediate.

Korrell resigned soon after the meeting had ended. In her resignation letter dated Tuesday, October 26, 2021, Korrell stated, “This opportunity has been enriching in many ways in the strides we have made as a facility with patient outcome measure improvements, staff education milestones and overall program improvements.” Korrell went on to add, “Whether you want to believe this or not, this facility is making great strides to provide excellent care to patients we serve. In my estimation, no CEO will succeed in this position as long as there are board members and staff who are only looking for the bad and only willing to tear down the people and work that we are striving to do.”

By Wednesday, board member Sylvia Shields had also tendered her resignation letter separating from her elected position on the hospital board. In her letter Shields cited the Trustee Pledge Meeting Code of Conduct in section E that encourages a board member to, “Fully support the decisions of the majority once a decision has been reached, even if I am in the minority.” She then stated, “There is no way I can support this decision,” in reference to hiring the Pathways Health group. Shields ended her letter by admonishing her fellow board members urging them to look at letter A on the pledge that calls for board members to “Refrain from micromanagement and focus on strategic leadership and policy, not on administrative and operational detail.”

The Hospital Chief of Staff, Dr. David Lenderts, who resides in Alamosa, sent his resignation letter on Thursday with a statement from his lawyer that indicated he had completed his duties within the district and was withdrawing all credentials and services. He further admonished the board with the opinion that the removal of the CEO was a serious matter and not done in good faith.

One other person in a leadership role, Brenda Smith who had recently been hired as the Eads Medical Clinic manager also tendered her resignation last week.

The Independent has since looked into the services that Pathways Health, a hospital consulting group, can offer to the district. It is not well known, but Keefe Memorial Hospital in Cheyenne Wells recently went through a similar issue with their leadership and brought Pathways into the district in order to evaluate and restructure processes, procedures and services. The Pathways staff will examine job descriptions, provide educational opportunities and training, and will help the board to hire new leadership as well as new providers.

Pathways was hired at Keefe Memorial about 5 months ago and since that time the CEO was let go and Pathways is now working toward finding new leadership. When Pathways came into Cheyenne Wells, they conducted a 3-day assessment of the personnel and procedures, the same as they did in Eads. They then made some initial recommendations to the board as it pertained to the CEO position. In the case of Keefe Memorial, a number of job descriptions were re-organized which has helped greatly with the organization’s overall effectiveness.

The Independent talked to a number of employees and community members in Cheyenne Wells and the overall consensus is that Pathways, although expensive—we could not get a definitive cost figure for Eads by press time—had improved their billing systems so much that they feel they have recouped that cost and then some. Today, the Independent was told, that Keefe Memorial will soon be interviewing four (4) possible new providers. That is an amazing stat when one considers how hard it is to bring qualified providers out to rural Colorado.

There are still questions that have gone unanswered in Eads. For instance, the Independent tried to get a statement from the leadership that remains as to whether Pathways talked to the leadership team when they did their initial assessment. They did a complete assessment that included every level of the organization in Cheyenne Wells, so one could conclude the same was done here. However, the Independent was unable to verify whether CEO Korrell or DON Lane ever had the opportunity to be included in the assessment. At that time, Korrell was often unavailable trying to cover areas lacking employees including many mornings in the Dietary Department. Then, too, there was an acute break out of Covid-19 among the staff that also affected the leadership forcing them into quarantine.

At any rate, the board felt they had to do something to stop the firestorm that was getting out of hand. Long time board member Mary Eikner stated after the Pathways vote, “I think this will at least give the employees and community a sign that we are trying to make steps towards improvement.”

Pathways is scheduled to arrive at the Kiowa County Hospital District on November 8. Cheyenne Wells folks seem quite content with the improvements they are providing at Keefe Memorial. Let’s hope the same will be said in six months here in Eads.