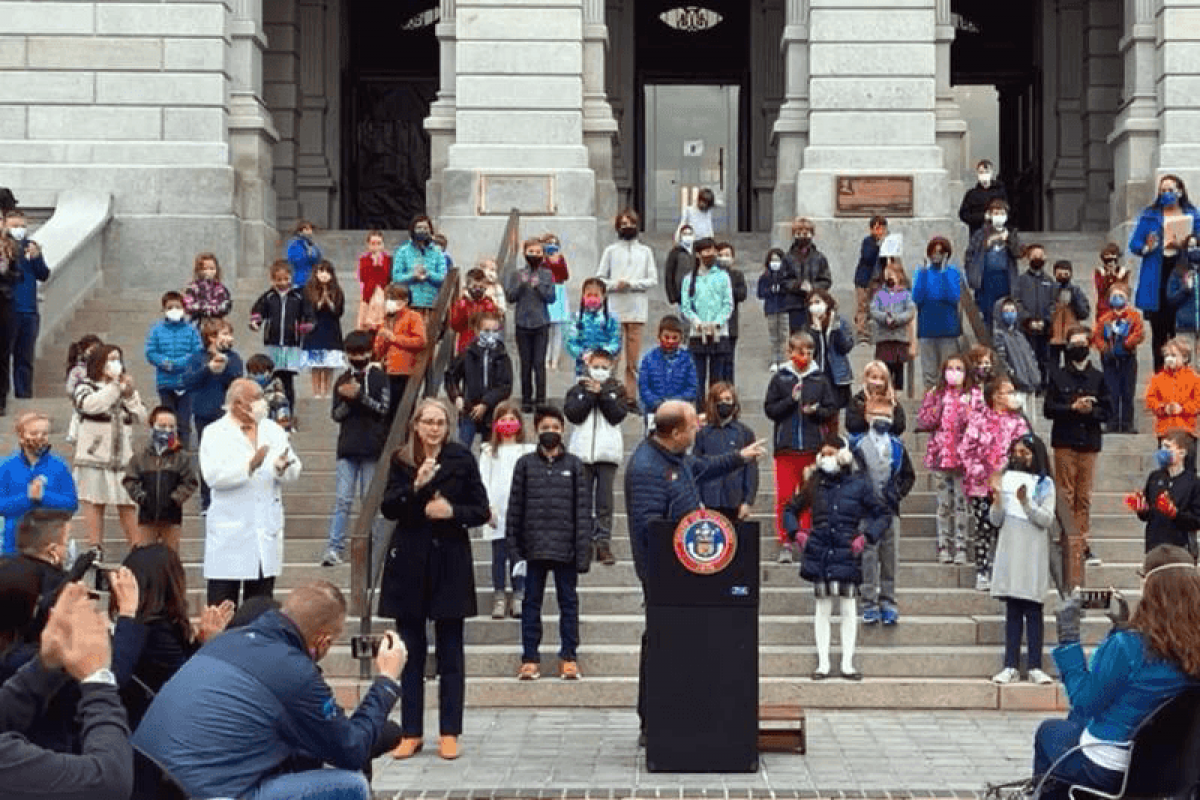 Colorado Governor Jared Polis introducing the children who participated in the Pfizer vaccine trials for children ages 5 to 11.

On Monday Governor Polis held a press conference on the steps of the Capitol Building in Denver in order to introduce the 252 Colorado children who he dubbed as “superheroes” because their parents signed them up to be a part of the three-month vaccine study for Pfizer.

Polis also touted the extreme success of the development of the vaccine for children from ages 5 to 11.

“Here in Colorado over 8,500 people have lost their lives during the pandemic to Covid-19. But today we stand here surrounded by great inspiration to draw from. Colorado had several hundred young people step up and do their part to end the pandemic. They were part of the trial for the vaccine for kids.”

Polis then went on to tell the crowd that so far since the end of last week when the kids’ vaccine was rolled out, 11,300 children have already been protected. Further, Polis intends to have 50% of the state’s children ages 5 to 11 vaccinated by the end of the year.

He finished by stating to the crowd, “I saw such joy on the faces of the relieved parents knowing their children can now be protected and will not die.”

Dr. Simoes has conducted research and received grants with the World Health Organization (WHO) and UNICEF since 1989 on a concept called Integrated Management of Childhood Illness. It has been adopted in countries such as Africa, Asia and Europe.

In his comments, Dr. Simoes told the crowd that 252 children participated in the trial from Colorado. The trial at Children’s Hospital in Denver was one of 81 sites that contributed to the study in the United States and four other countries. Colorado had more than 10% of the global total of participants in the trial and Children’s Hospital was the largest site in Pfizer’s direct trials.

Simoes went on to state that the trials began in June as a double-blind randomized trial which means no one, not child or parent or researcher, knew which child received the actual vaccine and which child received a placebo shot. Further, the ratio of vaccine to placebo was 2-to-1.

Simoes stated, “With the EUA status and then CDC allowing us to vaccinate the children we can now unblind the children in the trial. By now all the children have been vaccinated.”

Simoes did not mention how long the vaccine maintained its efficacy. Nor did he go into the fact that it takes a complicated set of tests to determine which strain, the Delta variant or the Alpha, a person has acquired. Neither did he mention whether that was a part of the study.

He did say, “We have found no serious side effects. The vaccine is quite safe. And we have determined that 99% of children in trial have antibody responses that are protected right now.”

Simoes finished by making a blanket statement, “I believe in the science and integrity of the trial and this vaccine.”

However, there are just as many people who strongly disagree with the statements made by Polis and Dr. Simoes today on the Capitol steps in Denver.

Alex Berenson, has researched the vaccines in great detail and has amassed a large collection of information and scientific data as he has opposed the use of these particular vaccines since they were initially rolled out. He is often times seen as a “right-wing conspiracy theorists,” a favorite tag to put on people who don’t go along with the status quo talking points of the corporate media and big pharmaceutical companies.

In an interview Berenson was talking about a landmark British study that had recently been released, “What the British study is saying is they are now finding the vaccine interferes with your body’s innate ability after infection to produce antibodies against not just the spike protein but other pieces of the virus. Specifically, vaccinated people don’t seem to be producing antibodies to the nucleocapsid protein, the shell of the virus, which are a crucial part of the response in unvaccinated people. This means vaccinated people will be far more vulnerable to mutations in the spike protein EVEN AFTER THEY HAVE BEEN INFECTED AND RECOVERED ONCE (or more than once, probably). It also means the virus is likely to select for mutations that go in exactly that direction because those will essentially give it an enormous vulnerable population to infect. And it probably is still more evidence the vaccines may interfere with the development of robust long-term immunity post-infection.”

On Friday, Toby Rogers, a Ph.D. in political economy from the University of Sydney and a longtime critic of the pharmaceutical industry wrote an opinion piece concerning the FDA’s risk-benefit analysis of Pfizer’s EUA application for vaccines in children ages 5 to 11.

His research showed that children have extremely low rates of Covid-19 and when infected very few children are hospitalized and only a small handful, most with a co-morbidity such as cancer, have died because of Covid-19.

He is critical of the trials and the “90% effectiveness” claims, saying they are “meaningless,” because the number of participants was extremely low including 1,518 participants in the control group and 750 participants in the placebo group. Rogers stated, “There is literally no emergency in this population for which one could apply for Emergency Use Authorization.”

Rogers further states that the clinical trials were intentionally undersized to hide the harms. The FDA actually called Pfizer out on that issue in the summer at the beginning of the trials. Pfizer ignored their concerns. Rogers wonders, “If the rate of particular adverse outcome in kids as a result of this shot is 1 in 5,000 and the trial only enrolls 1,518 in the treatment group, then one is unlikely to spot this particular harm in the clinical trial.”

Next, he states Pfizer only enrolled participants 5 to 11 years of age without evidence of prior SARS-CoV-2 infection. The British government’s study that states the mRNA shot wipes out natural immunity and leaves the child worse-off than doing nothing now comes into consideration. “In June it was estimated that 45% of children had already had the virus. Now that percentage could be as high as 75-80%. But Pfizer did not test what the mRNA shot does to children who already developed immunity.”

“The follow-up period was too short,” according to Roger. “Cohort 1 appears to have been followed for 2 months, Cohort 2 was only monitored for adverse events for 17 days.”

Further, Rogers points out that the FDA risk-benefit model only looked at one harm and that was myocarditis. But young people have showed an array of injuries with this vaccine including anaphylaxis, Bells Palsy, heart attack, clotting, shingles and Guillain-Barre Syndrome. “None of these were considered.”

Rogers is also concerned at the fact that Pfizer wiped out the control groups as soon as the trials were over, intentionally vaccinating the kids in the placebo group who were the control group. “They claim it is an emergency and they did so for ethical reasons but now there can be no long-term safety studies.”

Another major critic of giving children this vaccine is Dr. Geert Vanden Bossche who received his DVM from the University of Ghent, Belgium, and his PhD degree in Virology from the University of Hohenheim, Germany. He held adjunct faculty appointments at universities in Belgium and Germany. After his career in Academia, Geert joined several vaccine companies (GSK Biologicals, Novartis Vaccines, Solvay Biologicals) to serve various roles in vaccine R&D as well as in late vaccine development.

Just today, November 8, Dr. Bossche stated on the American Conservative University podcast, “Covid Vaccinations in Children Will Lead to a Tsunami of Autoimmune Diseases. Under No Conditions Should We Vaccinate Any Child.”

On the podcast, Bossche explains his position, “Under no circumstances should young and healthy people be vaccinated as it will only erode their protective innate immunity towards Coronaviruses (CoV) and other respiratory viruses. Their innate immunity normally/naturally largely protects them and provides a kind of herd immunity in that it dilutes infectious CoV pressure at the level of the population, whereas mass vaccination turns them into shedders of more infectious variants. Children/youngsters who get the disease mostly develop mild to moderate disease and as a result continue to contribute to herd immunity by developing broad and long-lived immunity. If you are vaccinated and get the disease, you may develop life-long immunity too but why would you take the risk of getting vaccinated, especially when you’re young and healthy? Firstly, there is the risk of potential side effects; secondarily, there is the ever-increasing risk that your vaccinal antibodies will no longer be functional while still binding to the virus, thereby increasing the likelihood of injury or even severe disease.”

The doctor goes on to say, “What we need to do is give them an anti-viral that will diminish the virus pressure. There are many of them out there that have already been proven quite safe and been on the market for a number of years.”

Evidently, the verdict is still out, and time will tell who is right on this debate. Was this trial perfect and effective like Dr. Simoes stated today in Denver? Or were there flaws and cut corners pushed by Pfizer and ignored by the FDA in order to open up a new demographic of citizens who can now take the vaccine. Was it appropriate for the FDA to approve the emergency use for the world’s first mRNA vaccine for small children ages 5 to 11 years of age in about three-months-time, when this age group will have to live with these decisions for a very long time to come?