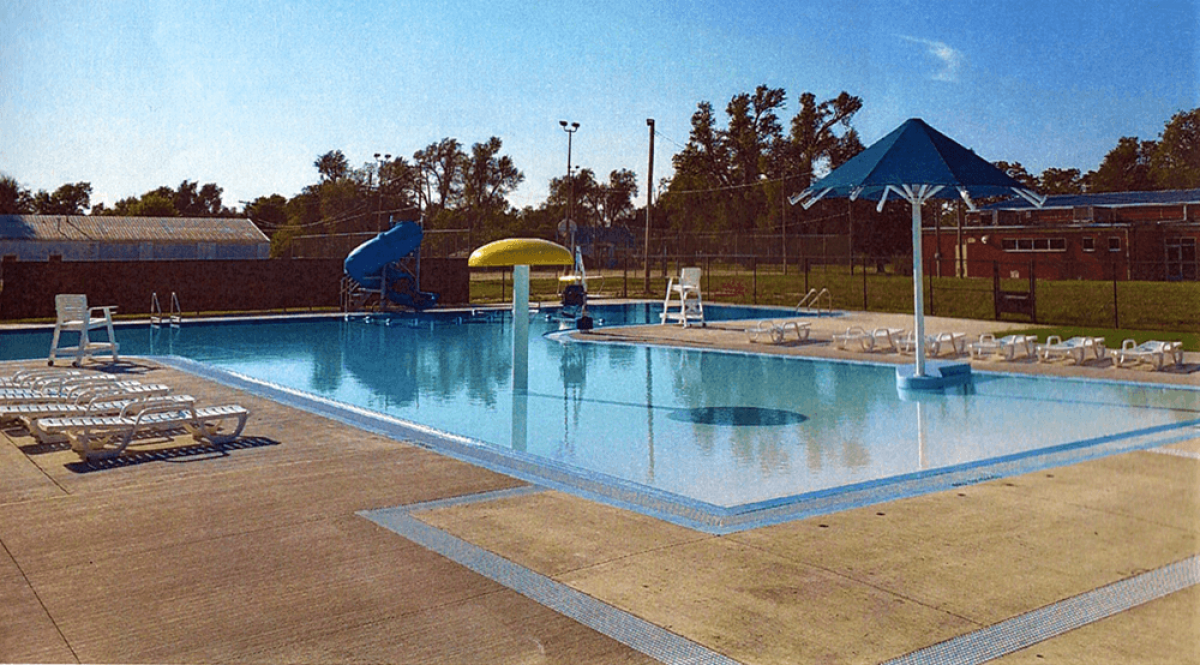 Nearly 30 people were in attendance at the Eads Swimming Pool community planning forum sponsored by the Eads Town Council and Mayor Joe Shields on Thursday night, November 30. In attendance was also pool project construction manager from Carrother’s Construction Company, Fritz Caspar, Executive V.P./Chief Estimator of the company, and Sammi George from Rocky Ford who represents the entire side of eastern Colorado for the Great Outdoors Colorado organization that funds many large and expensive projects such as the pool project in Eads.

Prior to the meeting, an online community survey was conducted, and the same survey was then distributed and filled out by meeting attendees as the discussion about the pool and its amenities progressed.

The crowd was welcomed by Mayor Shields who focused on his hope of bringing the community together to help fund the pool project. The Town Council will be considering at their next meeting on December 14 whether they will put money in on that project that will serve as the kick start for building the swimming pool. That money will be used to secure the Carrother’s contract and allow the company to do the initial soil testing, drawing modifications and surveys that will be required at the chosen site.

Shields went on to state that the project will be relying on local contractors and volunteers to give of their time and equipment in completing some of the preliminary dirt work and also in building the bathhouse. “If we can get that much in-kind work done it will not only substantially drop the cost of the project but will also represent a powerful statement for grant funders and investors who see the strong buy-in from the community.”

That being said, Caspar presented a slide show of the pool size proposed and its costs. If built turnkey by Carrother’s the cost of the pool is an estimated $1.55 million. An estimate will have to be completed to see how much can be saved by much of the initial work being done by community members. In addition, the pool will be 3,800 square feet in size with a footprint of 100’ x 160’ for the entire area including the bathhouse and parking areas.

The pool amenities include four swimming lanes, low diving board, large ¾ screw slide, toddler’s slide, mushroom spray, basketball goals and deck sprays. The depth will start at zero and eventually go down to 12’ deep. It includes a gutter filter system that refreshes the water every 6 hours, and it will have a 100% full finishing edge.

The discussion about the location for the pool took some time as Shields and the town council have been advised by Carrother’s that the site on 14th Street and Goff is an adequate size for the project. Casper was able to answer concerns from the audience about the grain dust and general dust that will blow into the pool saying the filtering systems these days are more than adequate to keep the water clean and recycled. “The pool has to turn over every 6 hours and it will pump new water through the system at 350 gallons per minute.”

Other concerns with the location presented was parking inadequacies and noise from the pool for the Courthouse. The parking was described as inset parallel parking and Caspar did not think there would be a problem with lack of parking as most kids, he understood, ride their bikes to the pool.

One community member then threw out an idea of shutting off traffic access on 14th Street from Goff St. to the alley, leaving the driveway for the home on 14th and Maine unhindered, and including the City Park and playground area in the project. There was favorable consensus on that idea.

Some still thought the old pool site was adequate, but Shields said he has had some concerns expressed about the Love’s walkway through there as unsafe. In addition, the tumbleweeds and dirt are actually worse up on the north end of the town. The attendees seemed split on the site question, but it appeared that slightly more would agree that the 14th Street & Goff site was more preferable.

Sammi George then described the importance of the community showing complete buy in for the pool and coming together in many ways to support the concept. That also means supporting it financially. She discussed a few ways to increase fundraising for the pool project. George informed the crowd that the Department of Local Affairs (DOLA) will match the GOCO grant funds should the project be awarded.

George then showed an important slide from the Colorado Great Outdoors organization that indicated their values and what they are looking for in projects they fund. For the Eads Swimming Pool project, George feels it is a great fit for the Community Vitality, Equitable Access, Youth Connections and Outdoor Stewardship values that the GOCO base their accepted projects upon.

However, according to George, the grant calendar is tight in order to get a pool built in a year like most everyone indicated they would like to see happen. The next go-round for grant acceptance is February 21, 2022 with approval for the next round on March 31, 2022. The final funding award in this very competitive environment is June 9, 2022 for this round.

According to Fritz Casper it will take a year to build the pool once the funding is secured so we are looking at summer 2023 as the best scenario if we go the route of utilizing GOCO funding.

George emphasized, “Your community must put together a compelling project, I think you have a good start.”

The next day following the community meeting, the Independent received survey results as to what the community members wanted for the pool. The following are the results compiled among those who answered the online and print survey—many surveys were answered before information was presented at the meeting:

The swimming pool meeting on Thursday served to answer a number of questions the community has had on the processes involved in building a new pool in the community. Everyone wants a pool, but there have been many ideas on how to best complete the project. The ball is now firmly in the community of Eads’ court, and it will be up to them to decide whether they are willing to support the town’s efforts to move forward on the project. Your support is crucial in order to raise the funds needed to make this project a reality.

After next Tuesday night’s Town Council meeting, we will know more about the direction the pool project will take.