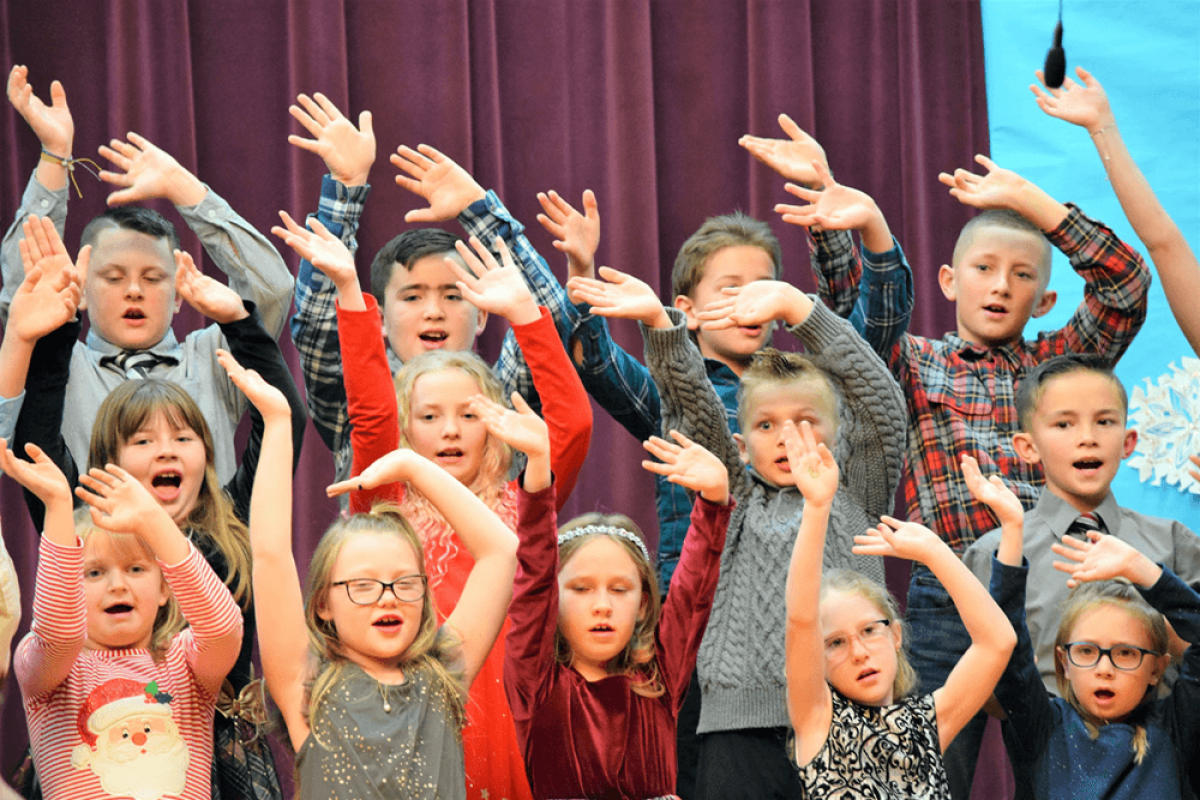 The impressively large group of Eagles Nest Preschoolers took to the stage first. The Preschoolers consists of 15 children in the 3-4-year-old group and 16 children from the 4-5-year-old group, which all took the stage together to impress the audience with their singing of songs, Ring Those Christmas Bells, The Dancing Christmas Tree, Reindeer Pokey, and Five Little Elves.

Dressed in their fanciest Christmas clothes each of these 31 children stole the hearts of everyone in the audience as some of them would dance and sing along with passion and emotion, while some were a bit timid and did not care to do anything but stand there searching the crowd for their parents.

This program was led by Preschool teachers Ciara McCracken and Kayla Mcloud.

The stage cleared and the Preschoolers were free to go sit with their parents, as the Elementary students worked to set the stage, dress in their costumes, and get in their positions on the stage patiently waiting for the show to begin.

Alas, the curtain pulls, and the audience was instantly entertained with a joyous musical that was written by Teresa Jennings and Karl Hilzemann, entitled, “The Reindeer Whisperer,” and performed by the Eads Elementary School, Kindergarten through Fifth Grade.

The lead character, The Reindeer Whisperer, was played spectacularly by Itzi Ramirez.

The entire group of elementary students made up the choir who beautifully sang and put motions to the songs, “Christmas Eve Eve,” “Why Won’t You Fly?” “Can You Please Save Christmas,” “Words Can Hurt” and “It’s Time To Fly.”

The solo performances were a special treat for all in attendance as the talent and courage shone through as each child took the microphone for their time to show the hard work that Mrs. Monica Uhland puts in working with each and every child.

This delightful tale that came to life on stage arrived with a memorable lesson to be kind and don’t talk bad about people. The production was the perfect event to set the stage as Christmas arrives in just a few weeks.

When the curtains were closed and the elementary portion was concluded, the 3rd, 4th, and 5th grade students took the stage once again to show off their mastery at playing Christmas songs on their recorders.

The elementary school is most fortunate to have Mrs. Monica Uhland to instruct and direct the youngsters each year. Those who may not know, but Monica Uhland is not only a talented teacher but also a wonderful vocalist herself.

This event was the culmination of all the hard work that has been put in by not only the students who were tasked with learning their parts, the songs, and the motions, but also for the teachers who helped organize and direct, as well as the parents and caregivers who listened to these songs over and over again at home so that their student could get it just right so to impress their beloved families.

Merry Christmas from the Eads Elementary School and remember to always use kind words.