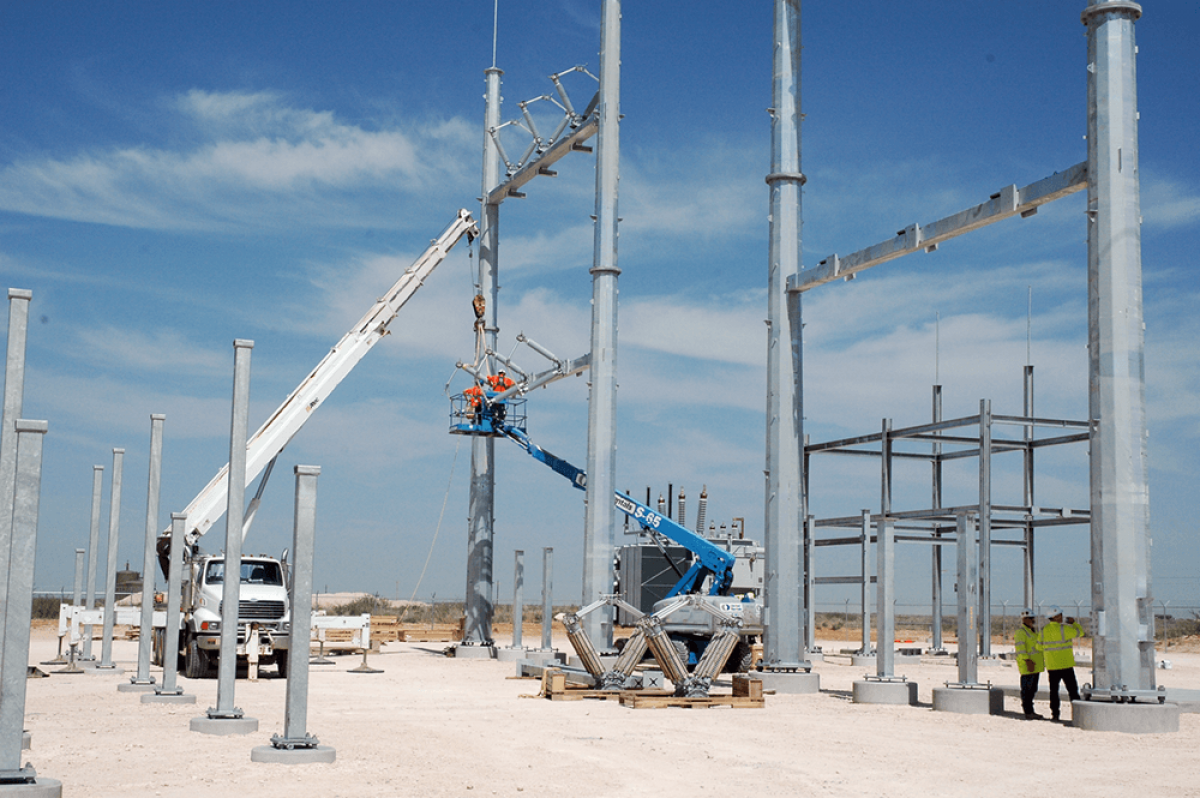 Crews work on a substation in New Mexico.

A large number of landowners, local government officials and interested citizens attended the second community meeting sponsored by Xcel Energy held at the Kiowa County Fairgrounds Community Building on Tuesday night February 1. Tables were set up with large maps of Kiowa County indicating that Xcel Energy had most definitely changed the initial pathway for the estimated $2 billion dollar energy project. 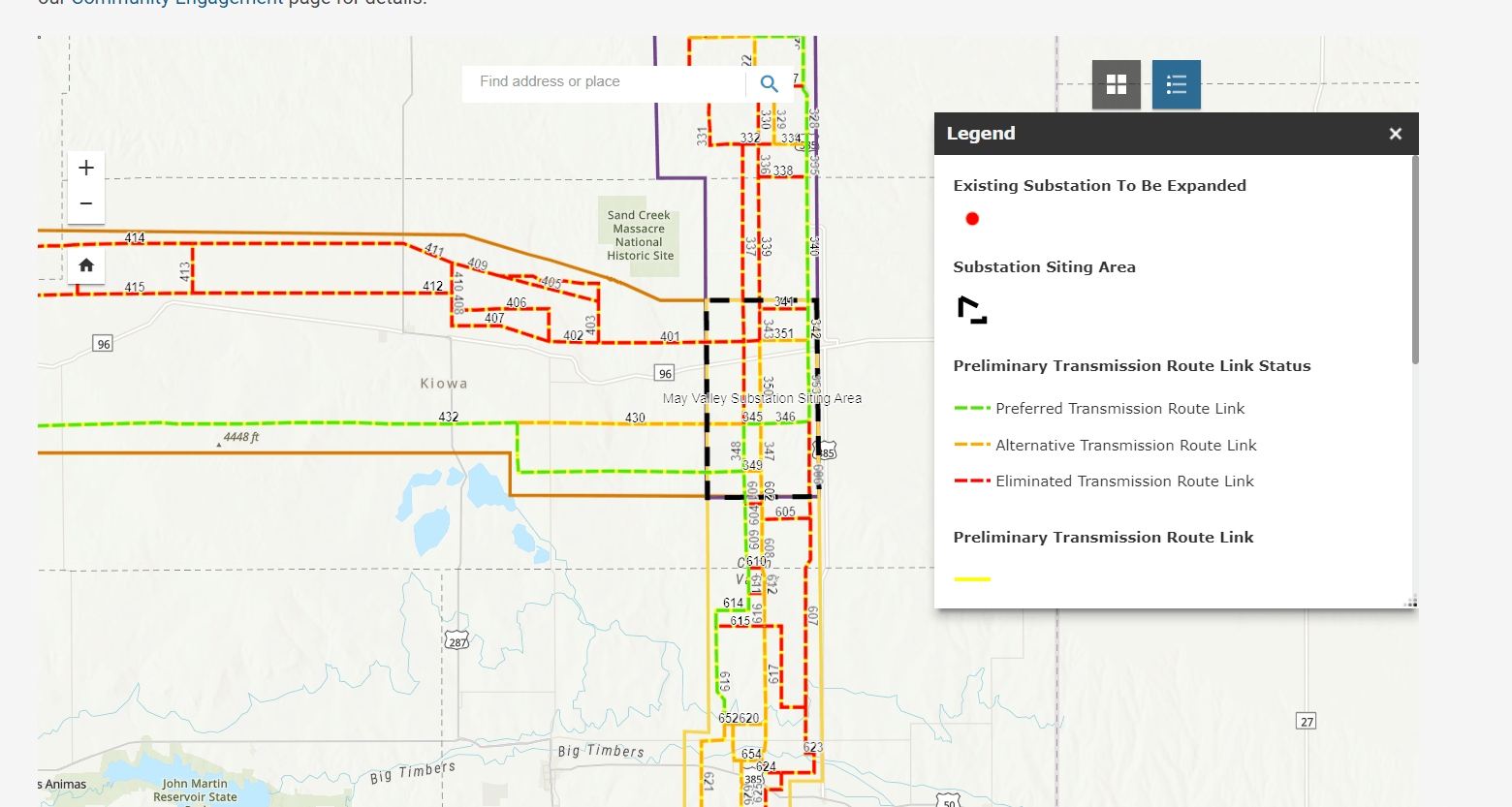 Xcel spokesperson Randy Fordice told the Independent, “The new route (indicated in green on the new maps) simply makes more sense. Initially, back in late October and early November we wanted to present some ideas on possible pathways for placement of the power lines for the project to the community as a whole. We asked for input and also reviewed state and federal information about the area.”

The new route presented by Xcel moves the towers away from the Sand Creek Massacre National Historic Site at least a number of miles to the south and even more miles to the east. The lines now run straight down county roads east and west and along the bottom of the county parallel to the Prowers County line, and along Highway 385 running north and south.

Fordice went on, “Since the meeting in early November we have collected a good number of comments from local governments, landowners and obviously the Tribes. Working from information and suggestions from the Sand Creek Massacre National Historic Site located northeast of Chivington we developed the current preferred pathway. We worked really close with site managers and the Tribes and listened to them and their concerns. We took what we heard from them and did additional evaluation. Now it’s 10 miles from the Sand Creek site.”

The call for action urged interested parties to contact Xcel Energy with their concerns on the initial pathway of the project that would put the power line towers in the view shed of the Sand Creek site. The call for action stated, “If you have visited the Sand Creek Massacre NHS you know that the viewshed, the area that is visible from the site, extends for several miles, particularly to the north, east, and south. At the average tower height, the transmission lines would be visible for up to about 12 miles in the viewshed from Monument Hill. If wind turbines are developed from this pathway, the intrusion on the viewshed would be even greater.”

The call for action also provided talking points for those who wanted to give input to Xcel Energy. They included the following arguments:

Since the day the atrocity occurred the cultural landscape surrounding the Massacre site has remained almost as intact as it appeared 157 years ago. Since the national historic site was dedicated and opened to the public in 2007, numerous potential intrusions on the massacre site viewshed, including oil and gas developments, have been kept at bay. County officials and surrounding landowners have been very conscious of preserving the integrity of the only national historic site in the area, which attracts over 6000 visitors per year. Even the Colorado Air National Guard went to considerable effort, working closely with the Cheyenne and Arapaho Tribes to protect the airspace over the site!

The transmission lines are the first step toward future infrastructure. While we are not against renewable energy, the presence of the transmission line will likely spur the development of wind and solar power generating facilities whose proximity to the site would only add to the destruction of the historic viewshed.

In 2013 the NPS went through the effort to bury the three miles of power lines leading to the site and these were traditional 40-foot tall poles. Imagine the impact 190 foot-tall towers will have on a visitor’s experience. Does Xcel Energy really want to have the distinction of being the first entity responsible for marring a culturally significant landscape that so many others have been respectful of preserving?

After receiving this input and talking with the Tribes and other Sand Creek representatives, Xcel Energy created a simulation that provided imagery of what 10 miles from Sand Creek’s Monument Hill looks like. The view shed of the preferred Xcel Energy towers is now not visible on the simulation. Fordice explained, “We can’t see the towers after moving the lines further away from the historical site. The preferred 10-mile route really met the concerns of what we heard from the Tribes.”

Also, last November the Kiowa County Commissioners were supportive of the Pathways project. The reasons are obvious for a county that has a small county budget with little to no Oil & Gas production or renewable energy revenue. The property tax rate for Kiowa County is one of the lowest in the state.

Commissioner Mike Lening stated in November, “Like everything, the farming has changed, and we have less people. We need to diversify and use what we have—which is wind, sun and a lot of land—to move forward into the future. In my opinion, we need this desperately.”

Commissioner Donald Oswald pointed out the potential economic boom for landowners and tax benefits to the county, “There’s a lot of potential for landowners and residents of our county should this come to be. The leases for landowners from Xcel Energy and the renewable energy companies could be substantial. The spin-off of wind and/or solar generation being constructed will be the real benefit to the county. Initially, Kiowa County will collect a 1% impact fee from Xcel Energy for the transmission line infrastructure. Once the wind and solar projects are constructed, state assessed property tax that will increase our tax base substantially.”

Also, at the open house on February 1 were landowners who were initially satisfied with the first pathway that was presented in November. After seeing the changes on the maps there was some indication they were concerned that the now preferred changes to the pathway possibly took them out of the opportunity of revenue from the Xcel Energy towers and the eventual wind towers that are being proposed.

Fordice says, “Xcel is still taking input and although these new lines are the preferred pathway, they will continue to hold discussions and take comments from those impacted by the changes. We are always happy to answer questions from the Sand Creek people, landowners, media and local government. We always want to hear from people especially during this time, so we get the route right.”

Xcel Energy will soon begin doing land surveys, talking to owners and starting the permit applications. Somewhat later workmen will come out to microsite the structures and to make sure the pathway is clear. Fordice said, “We’re hoping to start the applications in mid-2022 and push into 2023. It depends, but we want to do as much of the early work as we possibly can.”

The land lease will call for easements of 150 foot right of ways. The contracts will be non-exclusive meaning the land can still be used for different agriculture purposes. The right of way will include a 2-track trail that will run under the lines. Steel poles of 105 to 140 feet tall, depending on terrain, will be placed 950 feet apart. That is 5 poles per mile. The poles will have a double circuit on each side of the structure with connection points for two wires on each side.

The project work will be done by unionized professional tradesmen hired by Xcel Energy. There will be 20-50 workers in different crews in the county at any given time once the work begins. Temporary housing may be an issue, but Fordice indicated the workers were well-equipped to live in different living circumstances. When the line is finished, there may be a handful of maintenance workers for the project scattered along the line. The maintenance will be the responsibility of Xcel Energy and local power companies will not have any access to those transmission lines.

Nevertheless, during the 2-3 years that the transmission line is being constructed the counties involved will benefit from workers purchasing fuel, food, retail sales and lodging.

As the building of the transmission line begins, they will start with civil access, then develop roads and gates for access. Then the foundation crews will come in to pour the holes and set the poles. The attachments on the poles will be added, and then the final wire pull will complete the work.

Fordice indicated, “The work for the segments out here will begin somewhere in 2025 and is scheduled to be completed in 2027.” Other segments are scheduled ahead of the May Valley segment meaning the building of the proposed wind towers and solar farms could begin sooner than 2025.