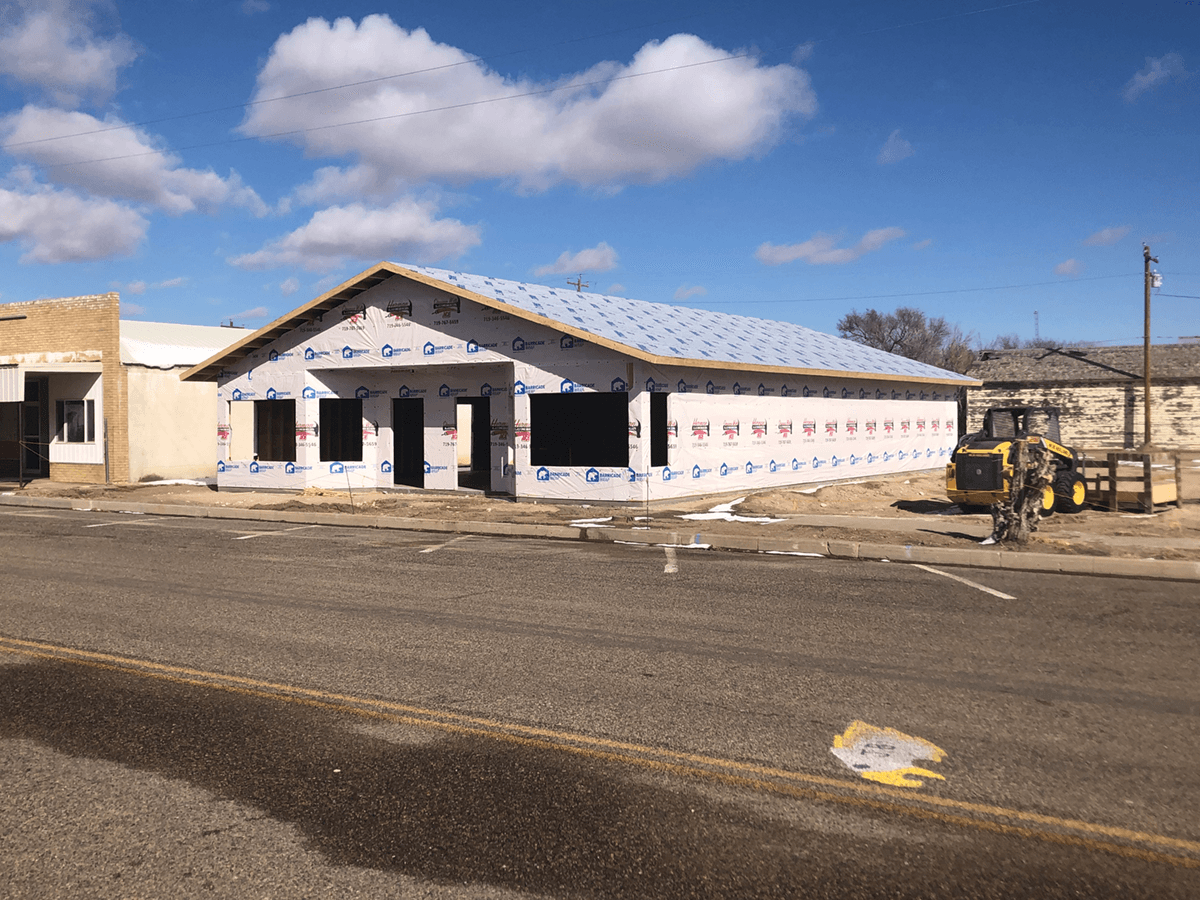 Five years ago, in April of 2017 the Independent sadly documented the tearing down of the two-story Rialto Hotel that had been built in 1919 and had stood proudly on Maine Street in the middle of the town of Eads for nearly 100 years when decay got the best of the once impressive hotel that contained a wealth of history within its crumbling walls. We bid the Rialto, “Farewell Dear Friend,” five years ago in one of our first articles and ever since we’ve been driving by that empty lot.

For the past few weeks, the citizens of Eads and surrounding communities have driven down Maine Street and wondered what the new building that is quickly going up in place of the Rialto is going to be. So, we asked.

The Rialto vacant lot was purchased by Nathanial and Holly Mitchek a little over a year ago as they had plans to build a commercial building on Maine Street in Eads that would house a small beauty salon. Since that time many life changes have occurred and now the simple salon concept has grown into something much more significant.

Holly Mitchek is the designer behind the building as she had a concept in mind that was professionally put into building plans by Denton Talbert and Kellen Schramk at the Cheyenne Wells Lumber Company. Holly emphasized, “They have been very helpful in making my ideas a reality and helping me find the right design elements.”

The builders are Nathanial Mitchek, his son Trent Mitchek and son-in-law Landon McCaffrey. Holly indicated they have had assistance and advice as they got things going from Kyle Barnett of Barnett Construction, Ryan Wyatt who did the plumbing work, and Reagan Lane and Jay Wilson who helped with the framing.

As part of the design Holly says, “I’m so excited to see the building completed. It’s taking some time, but it will have some neat finishes when completed.” Those finishes include cathedral ceilings with beetle kill tongue and groove wood throughout. The front of the building will have a full awning and large commercial windows to bring great lighting into the new space. There are Jack ‘n’ Jill bathrooms and a walk area in the very center of the building that allows for access into the commercial space on the other side as well as into private rooms.

The salon will have three (3) beauty chairs, two (2) wash bowl stations, two private rooms for massage therapy and possibly other services, and a massage pedicure chair with a water bowl plumbed in for foot massage.

Licensed cosmetologists Miranda Mitchek (McCaffrey) and Shayla Lane will be the hairdressers in the salon. They will offer an assortment of services, including color, haircuts, perms and special occasion designs.

Cherice Mullens, another licensed cosmetologist, will work in one of the private rooms and offers henna brows, waxing, and in the future permanent makeup.

Courtney Lane, a well-known and talented nail tech who is truly a nail artist, will work within the salon doing nails, pedicures and eyelashes.

The salon is scheduled to open in May with more information to come when the time gets closer. In the meantime, we will watch our new friend on Maine Street get pampered and primped in expectation of opening day this spring.