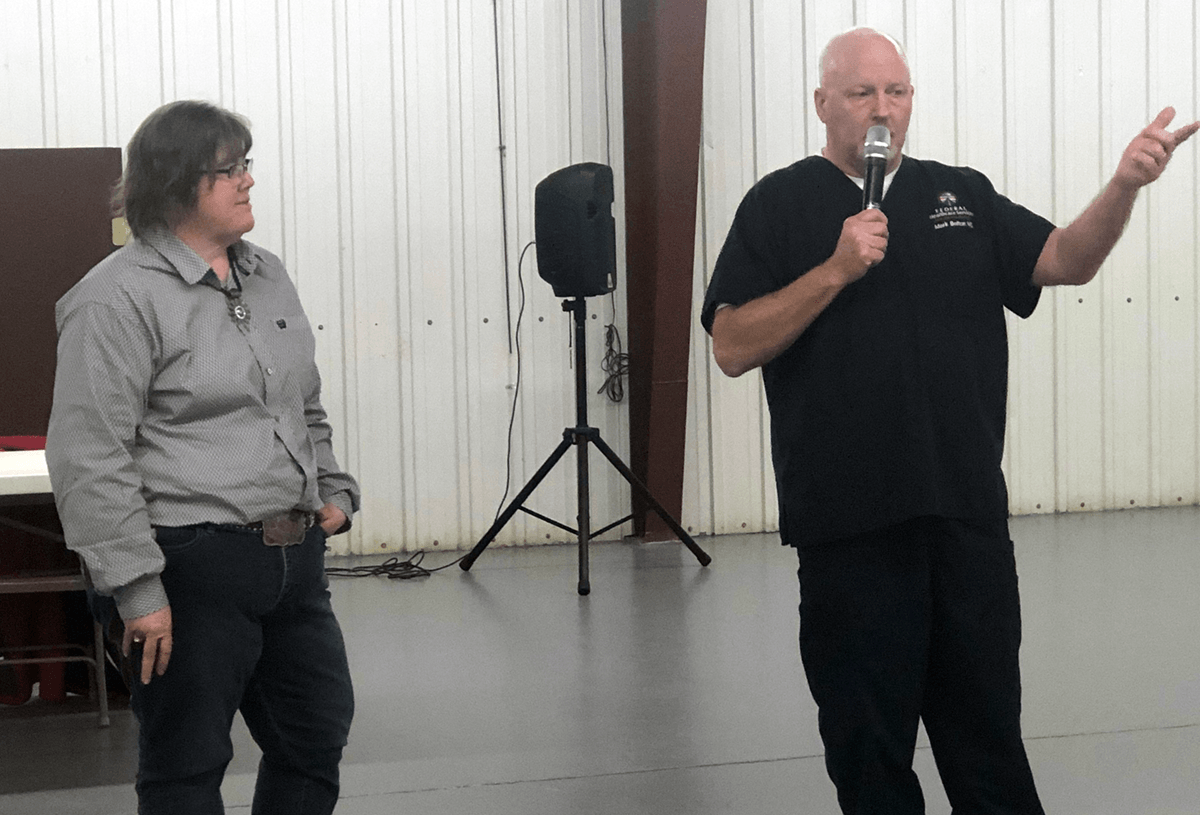 Matt Prince, a businessman in Eads, is a concerned citizen for our rural hospital as well as rural healthcare in general. On Wednesday, February 16th Prince took on the roll as host and facilitated a Rural Healthcare Q & A discussion featuring the impressive, highly educated, and experienced Dr. Mark Bolton, as well as Public Relations and Marketing professional Shannon Borders. Both professionals work in separate capacities for Keefe Memorial Hospital in Cheyenne Wells, Colorado. The event was catered with a taco bar prepared by Charlie’s Kitchen and was open to all community members free of charge. There were tables set up for children of the attendees with activities and a few older kids to help supervise the children so their parents could actively listen and take part in the discussion.

After a brief introduction by Matt Prince, Dr. Bolton laid out his education and work experience for the 65+ members in the audience as well as the nearly 50 watching the livestream from home that was provided on the Kiowa County Independent Facebook page which now has more than 1000 views.

In reference to the consideration of affiliation options highlighted by Kiowa County Hospital District (KCHD) chairman Craig Kerfoot in his letter to the editor that was published in the Kiowa County Independent’s January 12, 2022 edition, Dr. Bolton wanted to emphasize, that “You can do this, you do not need a big company such as Centura who will transfer the procedural revenue to their mothership.”

Dr. Bolton and his wife Karen have purchased a home in Cheyenne Wells, and he works under a contract with Keefe Memorial. His company hires doctors who are Veterans and accustomed to working in emergency situations and able to easily adapt to different settings. His company also provides regular rotations of doctors to the healthcare facilities that they serve. Dr. Bolton and his wife also have purchased a home in Cheyenne Wells with the idea to house the doctors who come for work in order to combat the lack of housing in the area.

Bolton has worked with Keefe Memorial for 4 years, and in those 4 years he has seen ups and downs as many hospitals experience. He explained that he saw many similarities at Keefe Memorial to another posting that he had in Arco, Idaho. He then went on to talk about his history with working for Lost Rivers Medical Center and their CEO Bradley Huerta in Arco, and how he was running what Bolton called, “The ‘57 Chevy of hospitals”.

The Idaho Business Review credits Bradley Huerta with, “Overseeing what could be the biggest financial turnaround in Idaho’s health care industry.” Bolton told the story of introducing the board of directors of Keefe Memorial Hospital to Mr. Huerta when he came to Cheyenne County and spoke to the board about the success that he has had with turning around his hospital, and he even went as far as chartering a private plane in the heart of the COVID-19 pandemic so that the Keefe Memorial board could go to his hospital in Arco to see how the changes and policies that he implemented as the CEO turned the hospital into a success story.

Huerta joined Lost Rivers in 2013, but he was not brought aboard to save the facility, rather he was hired to shut it down. The hospital had over three million dollars in debt, a pending bankruptcy, and only seven thousand dollars of cash in the bank and was unable to make payroll the month he was hired. Because the board of directors of Lost Rivers Medical Center took a leap of faith and trusted Mr. Huerta’s vision, this same hospital today has cash in the bank and no debt.

So, you can see why Dr. Bolton wanted to introduce the Keefe Memorial Hospital board to Mr. Huerta. Since their time meeting with Huerta, Keefe Memorial made the decision to hire Pathways Design Group (PDG) who brought in a team of highly experienced interim leadership professionals to turn the hospital around and keep them away from their own brink of closure. Dr. Bolton believes that an introduction between Mr. Huerta and the board of directors of KCHD would be equally beneficial to our local healthcare setting.

Readers may remember, Dr Mark Bolton wrote a letter to the editor that was published in the Independent’s January 26, 2022, edition titled The Future of Healthcare in Eads and Kiowa County; in which he gave his educated opinion on several troublesome topics that have been brought to his attention by concerned community members of Eads and Kiowa County.

In addition to his civilian medical career, Dr. Bolton served in the Air Force. While serving his country in the USAF, he volunteered for two separate combat missions to Baghdad, Iraq in 2003 and 2004. Bolton’s military training includes certification as a Flight Surgeon & Critical Care Air Transport Team physician. He was honorably discharged with the rank of Major.

Because of his vast medical experience in rural healthcare, his knowledge of how successful rural hospitals are run; and due to his association with Lost Rivers Medical Center he gained the attention of Kiowa County locals who are concerned about the status of our local hospital. Matt Prince has had many discussions with Dr. Bolton and the Q & A was as Matt describes, “Dr. Bolton’s brainchild.” After consulting with others, Prince decided to put together the Community Rural Healthcare Q & A event so that the wealth of knowledge that Dr. Bolton has on the subject could be extended to the stakeholders of our local hospital.

A group of concerned citizens wrote a letter to the editor to the Independent and was published in the February 2, 2022, edition. In their letter they wanted to speak to their experience after attending a Keefe Memorial Hospital Board Meeting on January 26, 2022. Their interest in attending the meeting was to educate themselves on their hospital board operations as well as to inquire about their experience with Pathways Design Group (PDG).

It is no secret that the KCHD has been through trials and tribulations over the last several months as the Independent has reported on the ongoing issues. The KCHD has voted twice to hire PDG. However, after much confusion and lack of follow through, the board then voted a third time to hire PDG, but the motion died with a 3-3 vote. At that same meeting the board voted on hiring Centura Health which also died with a 3-3 vote.

At another meeting there was a vote to hire Angela Linden of Linden Consulting Group to work as an interim CEO for 14 days until Pathways could come on board. Between the time that vote occurred and now, a Pathways Design Group contract was never executed. 14 days turned into more than a month and at some point, Linden’s role with KCHD changed from Interim CEO to Consultant. Most recently the board has hired an interim CEO, Jeanette Filpi, who is set to begin working on site full-time at KCHD sometime in March.

Shannon Boarders was also present at the event and was an impressive speaker giving insight into how she sees PDG has benefited Keefe Memorial. Shannon is local to Lincoln County and currently works as Public Relations and Marketing for Keefe Memorial Hospital. She talked about the strides that have been made at Keefe Memorial since their partnership with PDG and the new programs as well as specialty clinics she has seen and been instrumental in bringing in.

The meeting was then opened to the public for several questions from community members regarding the practices that Dr. Bolton had spoken about, the reputation of PDG as he knew it, and questions about our hospital’s status with PDG.

Laura Negley, a concerned citizen of Kiowa County was present and asked for clarification on whether our hospital had entered into an agreement with another company. KCHD board member Ken Flory who was present in the audience as a fellow concerned community member offered some clarification stating that the hospital had not entered into an agreement with another company, but they have hired an interim CEO who will help them hire a permanent CEO over the course of the next 6 months. Flory, who voted affirmative each time the KCHD board voted to hire PDG, was a member of the group of citizens who attended the Keefe Memorial Hospital meeting as well as signed the letter to the editor.

Negley went on to ask, “Will having this interim CEO create a different way in which to achieve what Keefe Memorial has achieved with PDG?” In response, Flory stated, “I will not comment on that.”

We spoke to Matt Prince, one of the community members who not only attended the Keefe Memorial Hospital meeting but helped pen the letter to the editor in the Independent. Prince informed us that the main concern for the group who signed the letter to the editor was to clarify misinformation surrounding Pathway Design Group and Keefe Memorial Hospital that had been shared by certain people in the community.

Prince, whose wife Claire Prince is a current KCHD board member, had this to say about bringing the community together for the Q & A event, “The main concern for putting on the Q & A was to educate the community as to what the real options are as far as remaining independent, opting out to a holding/management company, or hiring a management company to take over operations. It was also to educate the community on rural healthcare in general. The presentation came about after many in depth conversations with Dr. Mark Bolton about rural healthcare and in recognizing how educated and knowledgeable he is on the subject; I was acting alone on this one with help from other supporters.”

Prince would like to encourage anyone who is concerned to, “Attend the meetings, voice your opinion there, and vote for a change to the board in May. We have to make sure the board is actually carrying out the wishes of the community.” Matt Prince has announced that he is running for a position on the KCHD Board of Directors in the Special District Election that will be held May 3, 2022.