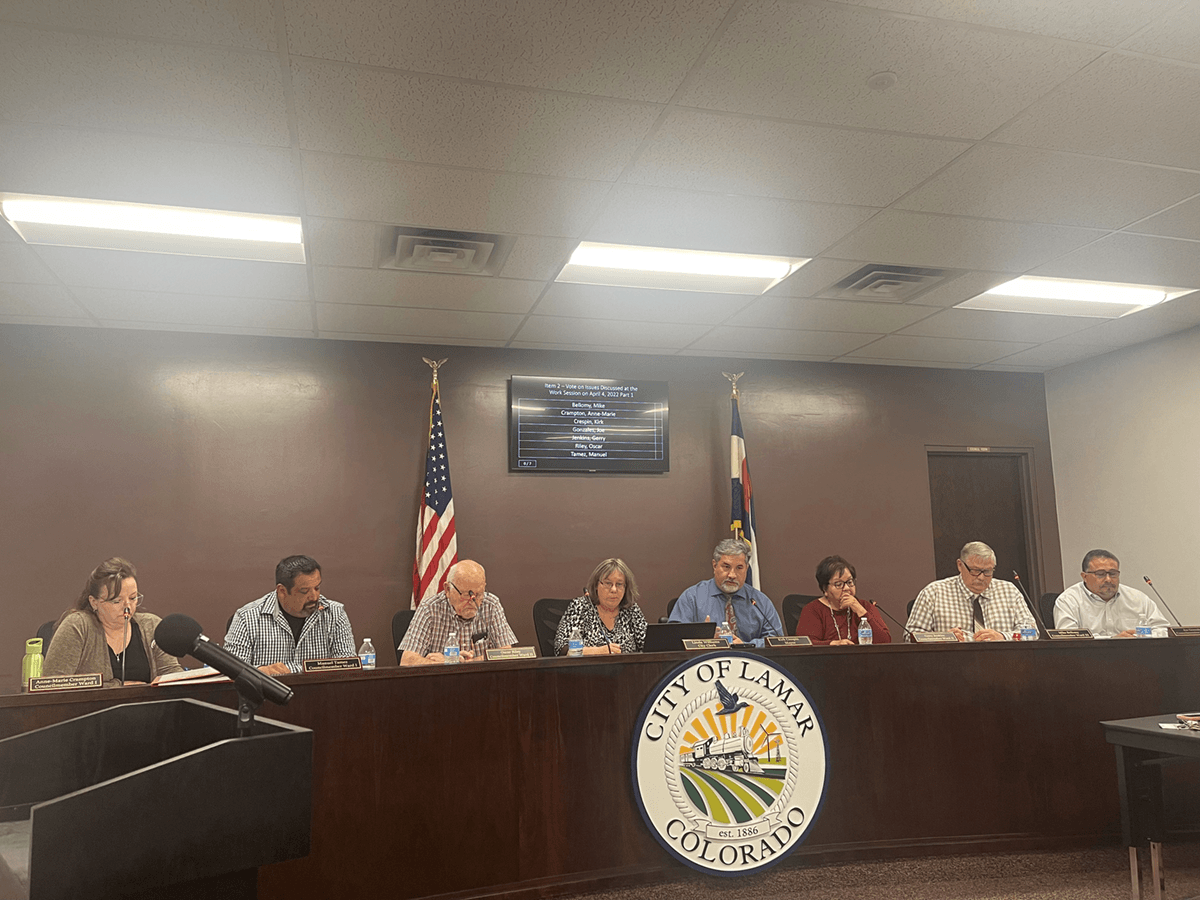 Lamar, Colorado- In November 2021, Lamar joined more than 90 other Colorado municipalities by passing ballot initiatives 2A and 2B, which allows for the sale and tax of recreational marijuana within Lamar city limits. These initiatives were spearheaded by SOCO, Inc a Pueblo group which is otherwise known as, Herbal Garden.

Herbal Garden is a cannabis business that has dispensaries and grows marijuana up and down I-25 from Pueblo to Trinidad. Representatives for Herbal Garden circulated a petition around Lamar and gathered more than 200 signatures in order to get 2A and 2B on the ballot in 2021.

Terry Sanchez, the General Manager of The Herbal Garden, says that while their group circulated the petition, they had nothing to do with the language on the petition, it was the city who was responsible for that.

In a community meeting held at the Lamar City Council Chambers on October 13, 2021 Cindy Sovine, a Colorado native and lobbyist with Sovine Consulting and campaign manager contracted by SOCO Rocks, Inc was in attendance and gave a speech, answered questions, and circulated post cards about the 2 initiatives. Her attendance was met with strong opposition from the 40 plus audience members and even some members of the city council.

On election night, November 2021, both 2A and 2B were passed by the voters of Lamar with each having nearly an 11% margin. This election outcome did not sit well with members of the community who could not bear to see legal marijuana in their city and sparked a legal battle and eventual judge’s decision that would turn the Lamar Community on its head.

According to Colorado Counties, Inc. (CCI) 25 counties in Colorado now allow recreational cannabis businesses and 21 of those counties allowing for dispensaries. Since February of 2014 when tax revenue collections began there has been more than $2 billion in taxes, license and other fees collected all associated with the production and sale of recreational marijuana.

Just to the north, in Kit Carson County, Burlington voters will see Question 1-B on their ballots in the April 5th city election asking whether or not commercial retailers can set up dispensaries within the city limits.

Former Colorado state Senator Mark Hillman and resident of Burlington wrote a letter to the editor and posted it to his personal Facebook page in order to share his insight on the subject.

In part his letter states, “Our children and senior citizens deserve to feel safe in Burlington whether walking to school or to the store or inside their homes. ‘Marijuana tourism’ will multiply our existing societal problems exponentially because while some ‘tourists’ will simply pass through; others will stay because they can’t or won’t leave.

The tax revenue generated by pot shops inside Burlington won’t begin to pay for the costs to law enforcement and social services across the county where most residents don’t get to vote in the city election but will still be saddled with the costs.

Finally, this is an irreversible choice for voters. Technically, voters could later repeal the ordinance, but I cannot find any Colorado community that has ever done that. This isn’t because marijuana is such a bonanza for a community but because commercial marijuana dealers will spend heavily to protect their racket.

Much of Colorado seems headed in the wrong direction, but so far, our rural communities have retained our common sense. I hope Burlington voters will cast a sensible NO vote on Question 1-B.”

There are counties in the state, such as Kiowa County, that have memorandums signed to not allow the production or sale of marijuana, but it is just a short drive to the nearest towns that have dispensaries in Southeast Colorado.

Las Animas, Rocky Ford, Sugar City, Ordway, Pueblo, Walsenberg, and Trinidad have more than 90 recreational and medical marijuana dispensaries between them. Las Animas in Bent County, for example, is a small town with a population of around 2,100 people and now has 5 dispensaries.

It would seem a given fact that a cannabis company such as SOCO, Inc or Herbal Garden would want to move into other southeastern Colorado communities especially those who are closer to state lines.

However, a group of concerned citizens in Lamar could not sit by and watch as their community welcomed the legal weed lifestyle with open arms. So, they got to work finding a solution and a way to stop this from occurring. With research and determination, one member took matters into her own hands.

Wonda Rohlman acquired an attorney and sued the City of Lamar (a home rule municipality) and Linda Williams (as designated election official for the City of Lamar). In the complaint it is stated that city clerk, Linda Williams who helped SOCO Rocks, Inc with the petition process stated that their petition would need just 5% of total ballots cast in the last election which would be 221. However according to Article VI Section 6-2 of The City of Lamar Charter it requires that all petitions containing signatures shall be equal to at least 15% of all ballots cast in the last election.

Within the complaints listed in the lawsuit there were accusations that city officials were giving recommendations to SOCO, Inc. of available real estate in Lamar before the initiative passed, in anticipation that the real estate values would increase after the passage of 2A and 2B.

In the court trial that was held January 11, 2022 the Plaintiff, Wonda Rohlman, testified as a registered voter in the City of Lamar and that she has been harmed by the failure of the city officials to follow the city charter. She also testified that she did attend some city council meetings but did not fully understand what they were talking about. Rohlman further testified that she did not ask any questions of the members of the council, nor did she file protest to the clerk’s certification.

In a decision filed by the District Court of Prowers County on March 24, 2022, and made by District Judge Michael Davison, it was found that “As the result of the November 2, 2021 election concerning the Lamar ballot issues 2A and 2B are set aside as invalid.”

There has been a large outcry from supporters as well as critics of these initiatives following the judge’s decision. As a result of this decision as well as the outcry from the public, there was a work session and special meeting of the Lamar City Counsel scheduled for April 4th beginning at 6 p.m. in the city council chambers.

There were approximately 80 people in attendance both in the chambers and in the overflow room that was used when the chambers were a maximum capacity. Mayor Kirk Crespin began the session to lay out the rules for the public.

The reasons for the community involved work session was to gauge whether the community felt that the council should refer marijuana measures onto the ballot for the 2022 election or if that process should once again be left up to the public to pursue.

Several members of the Lamar community and surrounding communities stood up to speak, some shared scripture that they felt appropriate in the situation, other had fact sheets, poster boards with bullet points, there were even binders that one member of the audience handed out to the board members with insights into recreational marijuana.

Lamar resident Brent Bates spoke in favor of the counsel referring the measure to the ballot saying that, “This matter is not over and it will not be for a long time.”

Former Mayor of Lamar Roger Stagner stated, “For years I sat up there and said that the city would not put it on the ballot, the same statement that this very board has said. Someone should have to bring a petition with the appropriate number of signatures on it, otherwise, it would look like the city council supports the measure.”

When the work session ended, a city council meeting was called to order by Mayor Kirk Crespin. At this time a motion was made by council member Anne-Marie Compton to not move forward with litigation as it pertains to measures 2A or 2B.

This motion was second by member Oscar Riley and all members voted yay in a unanimous vote.

After this motion, Compton then made another motion to refer marijuana questions onto the November 2022 General Election ballot at this time. This motion received a second from council member Mike Bellomy.

Much discussion between the members of the council ensued, where members stated their opinions and asked for legal clarification from the city attorney Lance Clark. Council member Manuel Tamez stated that, “We are really trying to do what is best for the city, and when it was originally going to be on the ballot, I wanted to tax it to smithereens.”

The audience was on pins and needles waiting for the vote, and when it came the result was a 2-3 vote and the motion to refer the measure to the ballot did not pass.

With an answer of how to move forward, or rather not move forward the people of Lamar are now, once again in control of the fate of legalized marijuana in their town. If there is to be a question about recreational marijuana on the ballot whether in 2022 or beyond, it will need to be done by petition of the people.