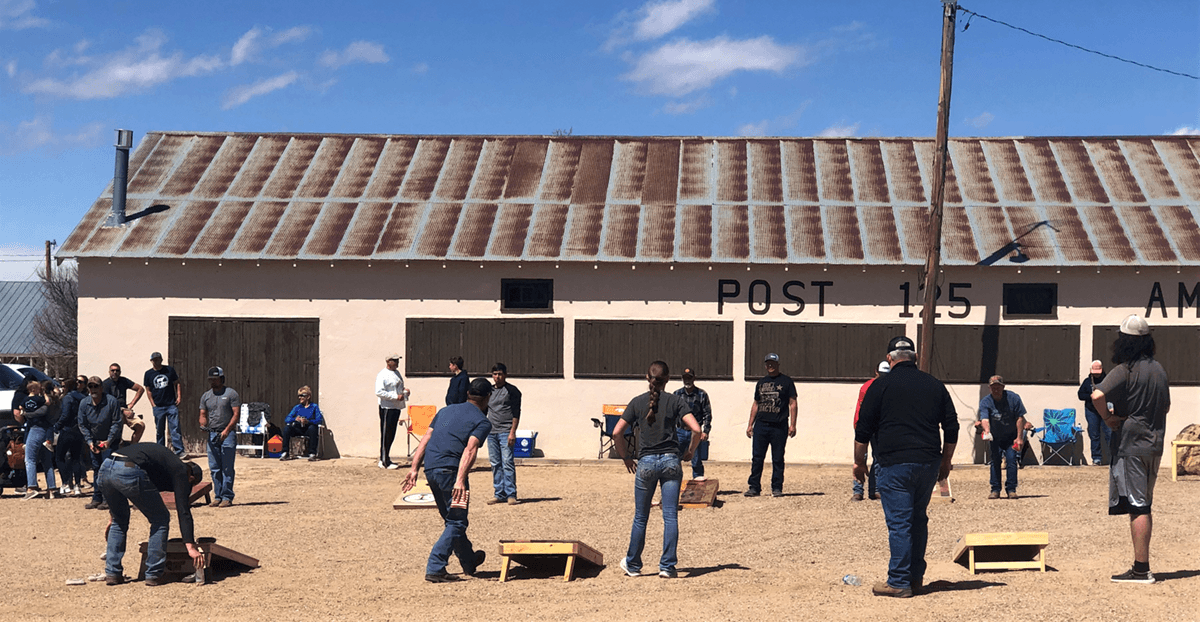 Approximately 350 plates of burgers and hot dogs were served to a decent crowd of Kiowa County Agriculture supporters on a blustery, chilly day at the Eads Fairgrounds on Sunday, April 10th.

According to the organizers of the Kiowa County version of the Meat-In events that started last year in defiance of Governor Polis’ Meat-Out proclamation, “The weather affected the event somewhat, but the people who showed up were very supportive and had a lot of fun catching up with friends, watching the kids play in the KidZone, listen to the live music and just enjoy living in an ag community.”

Prior to the start of the event a number of FFA students, 4-H members and Kiowa County Fair Royalty members were on hand to help the organizers set up the event.

The food was grilled by Charlie and Mary Vasquez and was topped off by homemade cookies made by the Eads Senior Citizen’s women. There were plenty of children’s games including new games conceived and created by Debi Derby with her amazing laser printer. The county workers had their ever-popular blow-up toys ready to go, and the putt-putt golf course originally built by Fred and Debi Derby was pulled out of storage and set up for the KidZone. There was plenty of face-painting and little kids’ games to go around.

Trent Rittgers set up his sound equipment and had music playing at the event all day. Then, he helped mix the sound for Jamie Crockett’s performance. Crockett performed for about an hour or more and the crowd enjoyed his folksy music as usual.

Finally, a cornhole tournament and a Barbeque Cook-Out competition was part of the day. Each of those events raised funds for the local agricultural youth programs.

The 2nd annual event was the brainchild of many local residents who were spurred on to reject last year’s proclamation made by Governor Jared Polis referring to “March 20th as Meat-Out Day.” That 2021 proclamation encouraged Coloradans to skip eating meat for the day and instead go vegan or try some of the “fake meat products” being developed in Colorado, as well as in Silicon Valley.

Last year, instead of proclaimed Meat-Out Day in Colorado, March 20th was obviously Meat-In Day as hundreds of like events such as the one enjoyed in Kiowa County was held throughout the state. This year Kiowa County wanted to continue to honor the huge sector of our community’s economy by continuing the event that started in protest a year ago.

The rodeo arena was also busy on Sunday afternoon as part of the 2nd Annual Ag Appreciation Day. Cody and Robin Fox organized events for approximately 20 competitors. They competed in barrels, poles, flags, and a fun run that was created with the people who attended. They also added breakaway roping for kids and adults who were wanting to learn how to rope.

The following were the winners of the Rodeo Events at the Ag Appreciation Day:

The 2nd Annual Ag Appreciation Day event netted just over $1,000 in donations and event fees that will be donated to the Eads FFA, Kiowa County 4-H clubs and the Kiowa County Fair Royalty.

An event like this takes a lot of dedicated people who care about this agricultural community in which we live. The following individuals and businesses contributed time, their skills and money in helping to put this important event together.