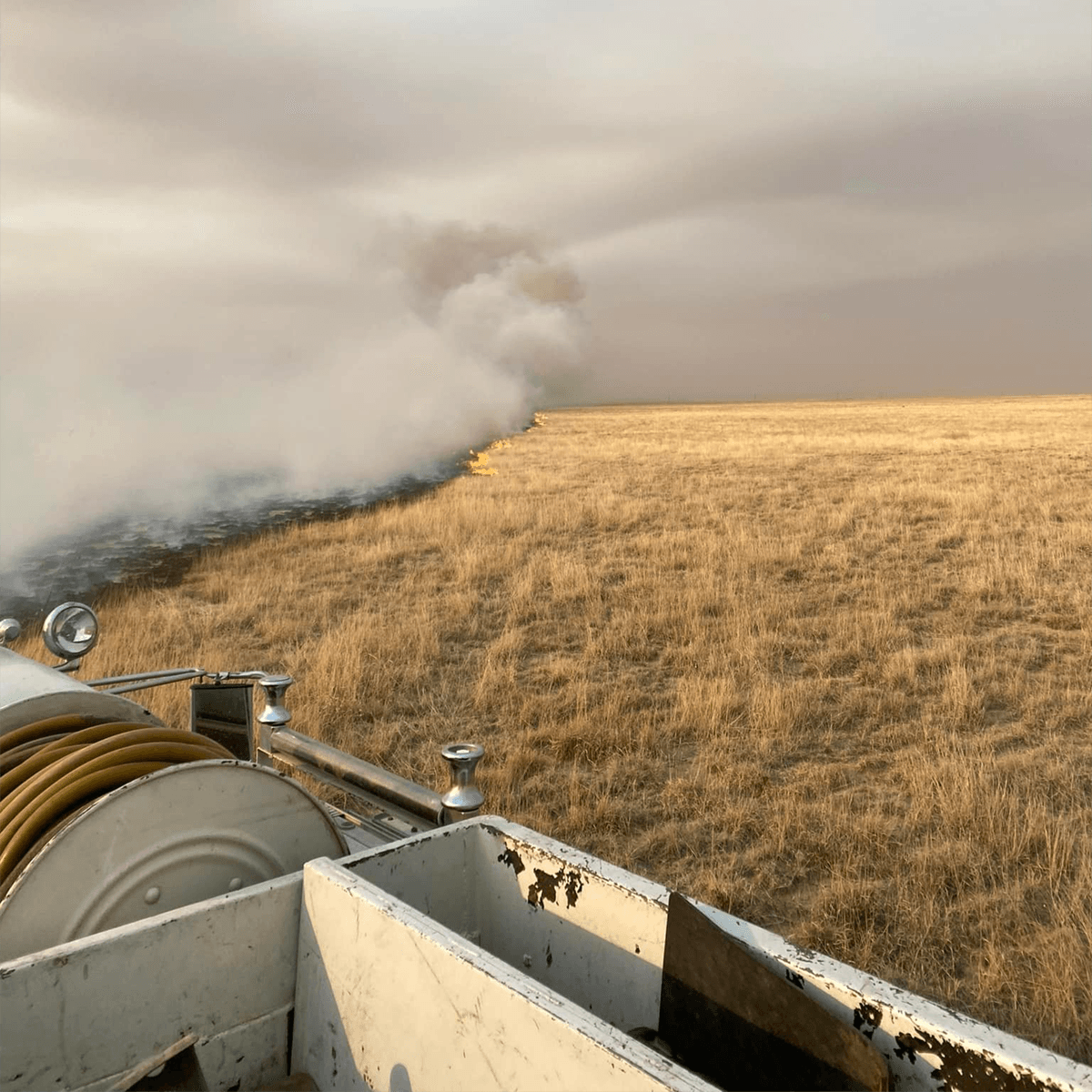 For the first time in Kiowa County history, according to Sheriff Forrest Frazee, two towns had to be evacuated and one town was on pre-evacuation orders as fast-moving wildfires threatened Chivington and Brandon on Friday (April 22) afternoon and then another fire later that evening threatened Haswell. It was one of the most devastating and destructive days in county history, but it could have been much worse had it not been for the heroism of local and regional fire crews, county workers, farmers and ranchers and volunteers.

Frazee said in an interview on Monday, “The heroism I observed from every individual just can’t be understated. Initially, a lot of the county fire crews were called to a fire in northern Prowers County on the Ponderosa so when the Brandon fire broke out north and east of there, we were left with less people than normal. The neighboring counties pulled us out of this. We didn’t have enough personnel or equipment to save us.”

The Prowers County fire was devastating along the Ponderosa ranch and Sand Creek as the nature habitat in that area was destroyed. it was the fourth wildlife habitat that has burned in the area in the past two weeks as three others in Bent and Otero county were also destroyed or damaged by fire last week.

It was also a dangerous fire as a Kiowa County firefighter who was called out a little after 1 pm on Friday to go to the Ponderosa said, “The smoke and dirt created conditions that were brown outs. We couldn’t see anything and were driving in areas that was filled with gulches and rough terrain.”

One Kiowa County brush truck got buried in the creek bottom and the crew had to be picked up in order to get out of the path of the fire.

While Kiowa County firefighters were mostly down in Prowers County, according to Frazee, another fire, referred to as the Brandon Fire, flared up a few miles north of the Ponderosa between County Roads C and D and along County Road 58. That is approximately 5 miles from the Kiowa-Prowers line.

Frazee stated, “I can’t find any indication as to how that fire started in the middle of the field. There were no power lines, transmissions, and nothing at the start site. The wind was moving further toward the east and the Ponderosa Fire was slightly east, already, of the starting point of the Brandon Fire.”

Frazee sees the fire that caused the evacuations of Chivington and Brandon and surrounding areas as suspect and is asking for an investigation crew to come to the site.

Once the Brandon Fire got going things got interesting—FAST. The fire moved an estimated 15 miles north towards the towns of Chivington and Brandon with a number of farms in its path. Frazee and his crew stayed in front of the fire and alerted farmhouse after farmhouse telling them to evacuate immediately. Emergency management dispatch was sent out to those who had signed up for the reverse 911 calls urgently announcing the evacuation orders.

“Some of the residents in the path aren’t signed up for the reverse 911 service and had not gotten the order. A few families were non-English speaking, but we managed to convey the situation.”

With the bulk of the county fire units south of the Brandon Fire, Kiowa County Road & Bridge crews used their maintainers to clear swaths of grass in order to form fire breaks.

Frazee said, “For a while (Allen) Wade Watts and his maintainer stopped the Brandon fire from being worse. He was working on CR 58 about 6 to 7 miles south of the town of Brandon.”

Watts had his own harrowing stories as at one point the fire came upon him so quickly that he faced a 20-foot wall of flames when a hay stack exploded.

The fire then raced toward the newly built home of Kevin and Chelsea Davis located just southwest of Brandon.

Frazee described the situation, “The farmers and county crew had been working to form fire barriers around the Davis house and the fire swiftly moved right between the new house and the old Dawson house that is on the property.”

Chelsea Davis posted a photo on Instagram of the aftermath at their farm as the fire moved ever northward stating, “We are beyond grateful and thankful for all of the firefighters, neighbors, friends, and prayers today! Continue to pray for moisture and always thanking Him!”

Frazee said the fire then jumped Highway 96 and just missed the town of Brandon by less than a mile. That fire then began to run straight at Charlie Crockett’s farm where friends and family had been working feverishly with equipment and hoses to form a barrier.

Jamie Crockett, who was on the scene at the Crockett farm stated later on Facebook, “Thanks so much!!! We had crews that showed up from 3 counties to keep my dad’s place from totally burning down. We lost all the hay and a good portion of the corrals but the buildings and machinery made it.”

Other edges of the fire were still burning closer to Chivington to the west and would jump the highway and head directly towards the Sand Creek Massacre National Historic Site.

The Parks & Wildlife guys had been helping Sand Creek to evacuate their workers and guests and also worked diligently along CR W with equipment forming a fire barrier. Cheyenne County crews were also there in that vicinity and due to their excellent work, that was where the fire finally got stopped. Through their fast thinking and response, they not only saved the sacred Sand Creek area but also saved the fire from burning its way into Cheyenne County where Frazee said, “There were few roads and tall dry grasses in that area.”

Sand Creek superintendent Janet Frederick said, “The fire came pretty close, dropped short of the southern border. We’re really grateful to the firefighters, county and anyone else who was out there running the graders and discs that seemed to have stopped the fire. We evacuated, so had to get most of our information second hand. We had fence builders on land south of us, and they told me that they saw the firefighters and people with graders and discing equipment working. They left when they saw the fire moving so fast to the north, but the next day, they thought it had stopped close to where the dirt work was done. That, and a wheat field that’s near there. Parks & Wildlife was there, as well. They had to cut a portion of our fence. I’ve heard now that locals were helping with sprayers and equipment.”

Seemingly the second the fire was contained, and crews were mopping up, another urgent call went out to all agencies to respond to a fast-moving grass fire that started on the Bent and Kiowa line near Blue Lake. This was the area where a fire had already burned a large amount of acres a week ago.

Frazee referred to this fire as the Haswell Fire and said it too looked suspicious and will be under investigation.

Spady said the next day that he wasn’t home when the fire broke out and was very thankful for the Bent County crews who did such an outstanding job. “We had one calf that caught fire and is still running around out there so I’m hoping she will make it through.”

The Haswell Fire was not an easy one to put out as late into the night the various fire agencies fought zero visibility and winds that kept shifting direction.

Frazee said, “At one point we had the town of Haswell on pre-evacuation orders as we weren’t sure if we were going to be able to stay in front of that one.”

On Earth Day, Friday, April 22nd Kiowa, Prowers and Otero all had major fires to contend with. The temperatures were up around 90 degrees, the humidity was close to zero and the wind was blowing in gusts of 60-70 mph. A perfect storm of conditions for a major catastrophe.

Prior to Friday, many other fires had been breaking out in the area, particularly in Bent and Otero counties. Some of those fires are also under investigation.

Last Wednesday, a suspect fire, according to Frazee, broke out in the Arlington area that had Kiowa County crews busy. At the same time multiple grass fires started flaring up in Bent and Otero counties.

Crews gained significant containment on the two biggest fires in Bent and Otero and continued to protect homes sitting dangerously close to the flames.

“I’ve still got a place to live,” said Rudy Estrada, whose house was saved by firefighters.

In a huge victory Wednesday afternoon, firefighters were able to save the historic Bent’s Old Fort.

“It would’ve been a huge loss,” said La Junta Fire Chief Brad Davidson on Facebook. “Right when I got out here and I saw it was heading this way, I told all my staff and my crews, ‘We will protect that building.‘ And we prevailed, so I feel very fortunate, and very lucky to have the staff that we did.”

The largest fires in the area, the Bent’s Old Fort Fire and Fort Lyon River Fire, have scorched 1,800 and 2,900 acres respectively.

Although it is impossible to give credit to all who were heroic and fought fires, plowed fire breaks, provided information and video and donated drinks and snacks, the Bent County/Las Animas Fire Department made the following Facebook post that pretty much sums up all the help:

“Great work by all our local agencies tonight as we battled a large grass fire near CR 19 & CR C in Kiowa County (NE of Blue Lake). We had constant switching wind gusts up to 75mph with zero visibility at some points. A very dangerous fire that threatened multiple structures, but never got to them thanks to the helpful crews we had! Like always, it was fun working with you all:

The fire is still under investigation. If you have photos of the fire, feel free to post them in the comments.’’