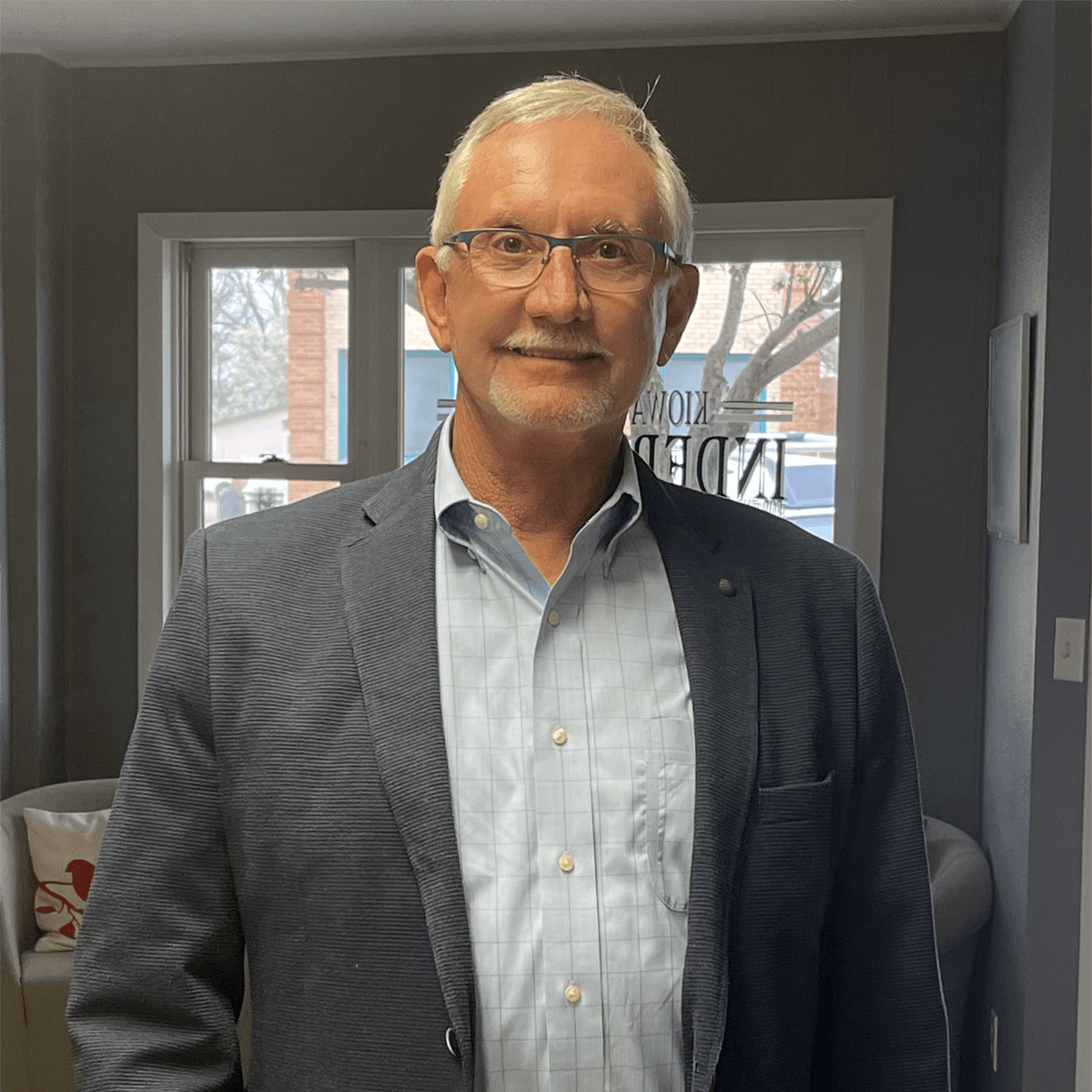 Docs Who Care and a Leap of Faith by Interim CEO, KCHD Stands to Benefit

Tuesday April 27 the Independent had the opportunity to sit down with Doctor Gary Morsch and Amy Lucas CEO and Regional Director of Docs Who Care (DWO) which partners with Kiowa County Hospital District to provide physicians and advanced practice providers and quality care to the patients and community.

When our interview was over with Dr. Morsh we met up with him again at the KCHD board of directors meeting where he was asked to come and speak to the board by interim CEO Jeanette Filpi. Dr. Morsh spoke of the same mission and goals and gave the same accounts of stories that he had just earlier spoke in our offices on Maine Street. The doctor also took the time to answer any questions that the board had about DWC services.

Some of the background that Dr. Morsch gave in order to illustrate the values and mission behind his company began with his own story and how DWC became what it is today. Dr. Gary Morsch began his career as a family physician who also served 21-years in the United States Army both active duty at one time and reserve at another, until he retired as a Colonel in 2012. During his time in the Army, Dr. Morsch was a military physician and deployed on several combat missions to places such as Kosovo and Iraq.

Morsch is also the founder of Heart to Heart International, which is described in his book, The Power of Serving Others as “a global humanitarian assistance organization dedicated to improving health and alleviating human suffering through the world.” His organization has gone across the world to serve as volunteers in areas where the help has been needed.

One story that Dr. Morsch told us in our interview is that in 2020 when COVID was at its peak in New York City and hospitals were overrun with patients his organization gathered a team of 12, 10 doctors and 2 nurses. Doctor Morsch was one of those doctors and went to the largest hospital in Queens that was seeing more than 400 Emergency Room patients per day and assisted the more than 10 already on duty doctors around the clock.

Though Heart to Heart is a non-for-profit organization, the same values and missions apply in his for-profit business Docs Who Care. DWC was started 27 years ago in Larned, a rural town in western Kansas. When the hospital in Larned lost 2 of their 3 doctors at the same time, they turned to Dr. Morsch to help them, and he agreed to find a group to come in and help staff them until they were on their feet again. It was later a joke that Dr. Morsch was the first “doc who cared.”

DWC currently has more than 350 licensed physicians who each work one-week at a time serving primarily rural critical access hospitals and clinics across 7 states and in more than 100 healthcare facilities. Dr. Morsch said that his mission is to, “Help rural hospitals succeed, not just to survive, but to thrive.”

Of the “Docs” who are employed by DWC, Dr. Morsch says that they look for service driven providers, not financially driven. He stated that they have doctors who started their medical career with them and have either retired or are still working for him until this day. Their goal at any facility that they serve is to, “Raise the level and quality of care.”

Docs Who Care’s tenure with KCHD began nearly a decade ago, when the late Doctor Jeffery Waggoner fell ill and was no longer able to practice medicine. Doctor Paul Wardlaw who many locals may remember, was one of the first “Docs” who came to us in that time and spent many years seeing patients here until his retirement. DWC has had a continuous contract with KCHD since then, and the terms of that contract have changed along with the needs of the district.

Morsch stated in the KCHD meeting, “We are not a one-size fits all service. Healthcare in our country is fraying at the edges and our goal is to be here when rural hospitals call on us as they face staffing issues. We are here to serve, we will scale back when the time comes that we are not needed as much or at all, but we will scale forward when the need arises again.”

Along with bringing in physicians to see patients in both the Eads Medical Clinic and the Emergency Room these providers are also currently providing educational training to KCHD’s full-time providers Abby Huff and Morgan King so that they can gain the experience needed to begin their own rotations in the ER as well.

With facilitation help by the KCHD interim CEO Jeanette Filpi every Tuesday the “Docs” on duty along with King and Huff hold a case presentation meeting discussing a case that they saw over the past week as difficult or unusual. Another service that the “Docs” are providing that is not covered under the contract but offered as a courtesy is the review of the two local provider’s charts. They then go over any issues with them so that they can help to fill in any holes or fix anything that could help with medical coding and billing.

Dr. Morsch indicated that the fee that the organization charges the district is around the middle of the scale for the services that are offered, however, KCHD is one of 5-10 other hospitals that currently gets what DWC calls a Scholarship Rate. This rate only collects fees that, “Hardly covers the cost of the expenses”. He added that they offer this rate to smaller hospitals like ours because of the tight financial position that they are in.

Currently DWC is providing round-the-clock service. Regional manager for DWC Amy Lucas tells us that a 6-provider team has been assembled, all of which have been scheduled to rotate through the clinic and emergency room as a consistent stable team of providers through the end of July. These providers will work alongside Abby Huff and Morgan King.

With essentially 8 providers who are seeing patients on a rotating schedule it is not only possible, but it is viable that any patient should be able to receive consistent care through the course of their treatment with the same provider at Eads Medical Clinic—at least through July.

With a full team of providers that are here on a rotating yet consistent schedule, an interim CEO who has implemented a new pay scale, policies, and programs throughout each department, things seem to be moving forward as we are on the cusp of the election when there will be 4 members elected to the KCHD board of directors, and who will be tasked with assisting and giving helpful guidance so that the progress that has been created can continue.

With progress being made, and internal turmoil settling down, what is next for KCHD? At the April 27th meeting, CEO Filpi stated that she feels that it is time to begin the search for a full-time permanent CEO. She recommended to the board that in the near future they begin reaching out to firms who can help locate potential candidates for the position so that the board can begin interviewing.

In her standing report Filpi also informed the board that she has applied for Congressionally Directed Spending for fiscal year 2023 from both Senator Hickenlooper and Senator Bennet to build a new 150 thousand square foot hospital. In her request for the funding, Filpi asked for $70 million citing this project would be a good use of taxpayer funds and will benefit the state of Colorado because, “Rural hospitals are the cornerstones of their communities, serving as key access points of care for Americans. In Kiowa County, KCHD is the largest local employer serving farmers, ranchers, the trucking industry, local businesses and helping to attract other businesses to the area which can improve economic stability. A vital rural community is dependent on the health of its population. While access to medical care does not guarantee good health, access to healthcare is critical to good health.”

The requested funds have been submitted to the Agriculture, Rural Development, Food and Drug Administration, and Related Agencies account. According to the National Association of Counties website the monies awarded to recipients from this flexible account can be used to “purchase, construct, make improvements to, or purchase equipment for community facilities in rural communities.... Projects must serve a rural area with less than 20,000 residents and the maximum federal share is 75 percent.”

Perhaps the theme that Filpi is trying to portray is that, if we build it, they will come. Who are they? One can only hope that patients, providers, and other essential employees needed to run and maintain a facility of this size will be enticed by a new healthcare facility that has the full backing of a newly elected board of directors who are steadfast in their dedication to provide only the best care and service for the stakeholders who rely on the district for their healthcare needs.

With the help of an organization such as Docs Who Care to fully staff the facility with qualified practitioners and MDs, the thought that Kiowa County could have a modern facility to practice modern medicine is no longer a dystopian dream but a vision that could be just within our grasp.