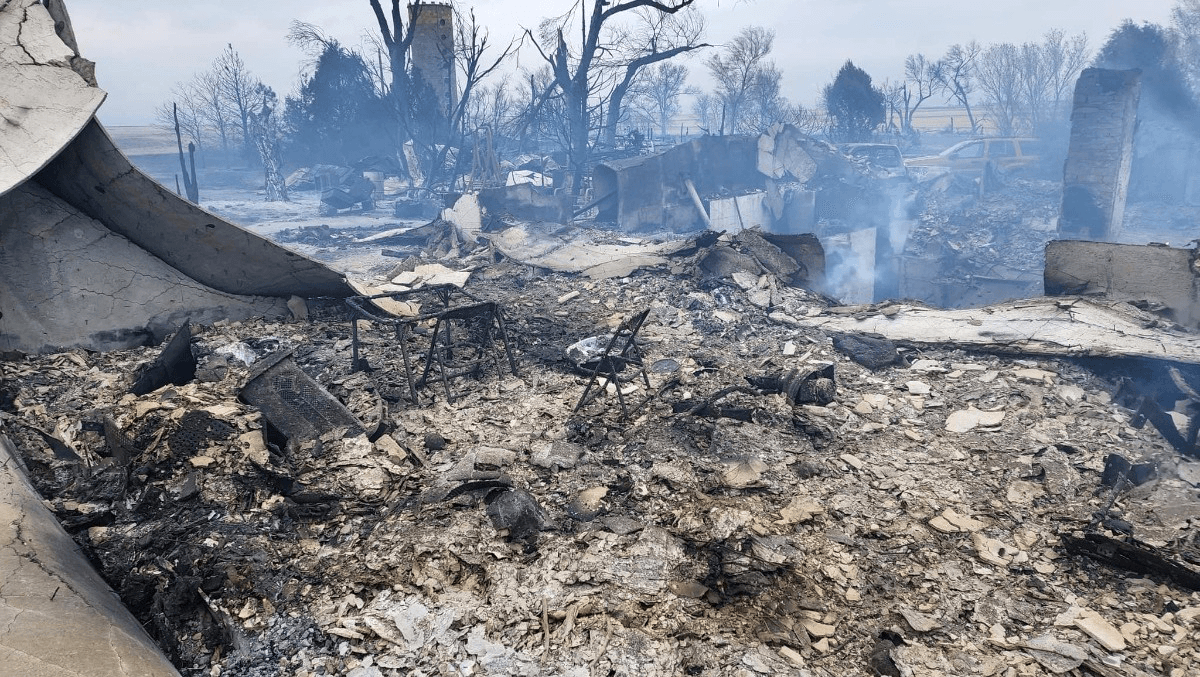 This is what’s left of the Marge Koenig Campbell and Ed Hollandsworth home located north of Holly after a destructive wildfire swept through on Sunday, May 1.

After the multiple fires southeastern Colorado has suffered through during the month of April, Sunday, May 1st promised to bring some rain across the arid land of southeastern Colorado. Some areas did get rain and some areas even ended up sheltering in place as tornado sirens hummed overhead. But, on Sunday, May 1, the people of Holly, Colorado faced the racing threat of a prairie wildfire.

And, for at least for one Holly family, May 1st did not bring rain or May flowers, but instead May 1st was the day their home and everything in it was destroyed by fire.

The thunderstorms moved into the area in the late afternoon on Sunday and those who had the CodeRed system in Prowers County and the Reverse 911 system in Kiowa County began to receive emergency notices about the turbulent weather that was moving through the area.

Then clouds releasing lightening strikes made their way across the arid landscape creating multiple hot spots on the crackling grasses of the high plains. Next the extensive wind with sustained gusts of 35-40 mph moved in causing the hot spots to ignite into numerous tall flames. Soon, several wildfires were burning near the two-mile jog correction line between Towner and Holly on the Kiowa and Prowers County line and were heading fast toward the town of Holly with numerous farmsteads directly in the path.

Firefighters, farmers and volunteers with shovels from around the area and into neighboring Kansas quickly amassed to the Holly fires hoping to save the farms that were in danger of complete destruction.

While the town of Holly received pre-evacuation notices, many citizens left town and went to shelter areas like the one offered by the Town of Granada some 10 miles to the west. But many stayed to see if they could help their neighbors.

Eads Fire Chief Russ Watson said they were paged out at around 6:15 to a report of fire along Highway 287 and County Road A. The Wiley Fire Department was already there, as well, and Watson said the Kiowa County crew mopped up that fire while Wiley was urgently called to the Holly fire joining numerous agencies on the ground.

Watson said, “There were multiple incidents of fire spread out over a 10-mile area that kept the various departments scrambling to keep up.”

As an example, Cheyenne County departments were up on Highway 287 and CR C in their county fighting a different fire. Once the crews got the smaller fires out, they were all called to the Holly fires as farms were being threatened north of Holly.

Kiowa County went to the command center set up at NN.5 and CR 33, located some 10 miles or so from the town of Holly. This was the site where multiple crews were doing their best to save the home of Bill Frey. Kiowa County had trucks and crew from Eads, Sheridan Lake and Towner on site.

Watson described the scene there, “We were getting weather updates as we fought that fire from emergency management as cell rotations and hail were in the area. The fire came in extremely fast. A fire barrier was plowed around the farmstead and then we just formed a line of defense with the fire trucks and met the flames head on. It was close, probably within 10-20 yards of the house, and it did get some small buildings and corrals, but we were lucky to save their home.”

Other units were in other places trying to save homes. One farm owned by Brad and Meadow Larrew also had a harrowing escape. Their exterior building and a barn were destroyed but the house was saved.

Meadow Larrew made a Facebook post the next day stating, “We are OK!! Words cannot express how truly grateful we are for ALL who came out to help us and saved our home!!! Thank you for all the calls, text and messages. I’m sorry if I haven’t responded yet. Most of all Thank You to all the Fire Departments, Local Farmers and Everyone who came to help!!! Our community is amazing. We have seen this numerous times. We are so Blessed!! Thank you all for the prayers!!!”

Larrew went on to lament, “It was so scary. My heart breaks for our neighbor, they lost everything!”

The neighbor Larrew mentions is Marge Koenig Campbell and Ed Hollandsworth. Their place was close by the Larrews, but the fire came so fast they barely had time to get out and away from the rushing flames.

The family lost their home, possessions and two cats.

In an interview with Mike Bowen, their daughter, Mandy Ferguson said, “Ed attempted to make it out of the house with his two cats, but he was unsuccessful. If it wasn’t for a family friend, we would have lost Ed,” she said. “I’ve never been more happy to be home in Holly.”

Both Marge and Ed have lived in the Holly community for many years and are dedicated community volunteers and advocates. Marge has worked as a nurse and is currently the interim coroner until the election in November. Ed, who is permanently disabled, served in the United States Army and worked for MedTrans Service.

Prowers County commissioner Wendy Andrade-Buxton announced in a Facebook post on Monday, “A People’s Credit Union account has now been set up to help with donations for Marge Koenig Campbell.”

Further, Marge’s daughter Rhiannon Whited set up a Go Fund Me account with the goal of raising a moderate $12,000 in order to help the family get back on their feet. As of press time on Monday the fund was already nearing $11,000. If you would like to donate to the family go to https://gofund.me/ec04816a or use the QR code in this article.

Whited wrote the following on the GoFundMe page for her mother, “My mom (Marge Koenig Campbell) and stepdad (Ed Hollandsworth) have suffered an unimaginable tragedy. They have lost their home and every single item they own except the clothes they were wearing when they ran out. A freak fire started by a lightning strike during a storm... that’s all it took. They have both done so much for the community. My mom was one of the first people on scene the night of the Holly tornado, and she was there ALL night. She’s been a nurse in our community since before I was born. How many VOLUNTEER ambulance calls has my mom been on? How long has she been a coroner? How many families has she touched? “

“And Ed... Not only is Ed a veteran, but he’s permanently disabled from an ambulance wreck after years of working on a transport ambulance that served our rural community. They have both spent countless nights on-call for their community, and now I ask that you be there for them. I’m so grateful that they are alive, as it was a close one and they dang near didn’t make it out. However, my heart is broken. My childhood home is gone and there is a lot of rebuilding to do.”

Today Whited added more details about her family’s harrowing experience, “I just wanted to let everyone know that my mom and Ed are safe. They got some of the animals out, but not all. Ed had stayed behind to try and dig a ditch with the tractor to try to save the house, but in so doing, almost got trapped there himself. A friend of the family drove out through the barricades and got him out. Things are devastating. The house is gone. Every square inch of that property is burned to the ground. That is, except the old brick grain silo. They also found a bobcat (alive) that had gotten itself stuck inside when it dove in to find shelter from the fire. I can’t express my appreciation enough. It brings tears to my eyes every time I pull up this page. The generosity of friends and strangers is enough to leave me at a loss for words.”

During the last two emergencies in Kiowa County and Prowers County, many people did not receive the vital emergency notices that can come directly to a cell phone. You must sign up for this service.

In Prowers County sign up for the Code Red service by going to this link: codered (prowerscounty.net).

Prowers County has instituted the CodeRED Emergency Notification System–an ultra high-speed telephone communication service for emergency notifications. This system allows us to telephone all or targeted areas of County residents in case of an emergency situation that requires immediate action (such as a boil-water notice, missing child or evacuation notices). The system is capable of dialing 50,000 phone numbers per hour. It then delivers our recorded message to a live person or an answering machine, making three attempts to connect to any number.

The last month in southeastern Colorado has been one for the record books as it is the first time communities and people’s livelihoods have been directly threatened. The heroes of southeastern Colorado are too many to even begin to name but represent the best of what rural Colorado is all about. It has been a season of miracles as these brave volunteers all continue to step into the line of fire, literally, in order to serve their fellow man.