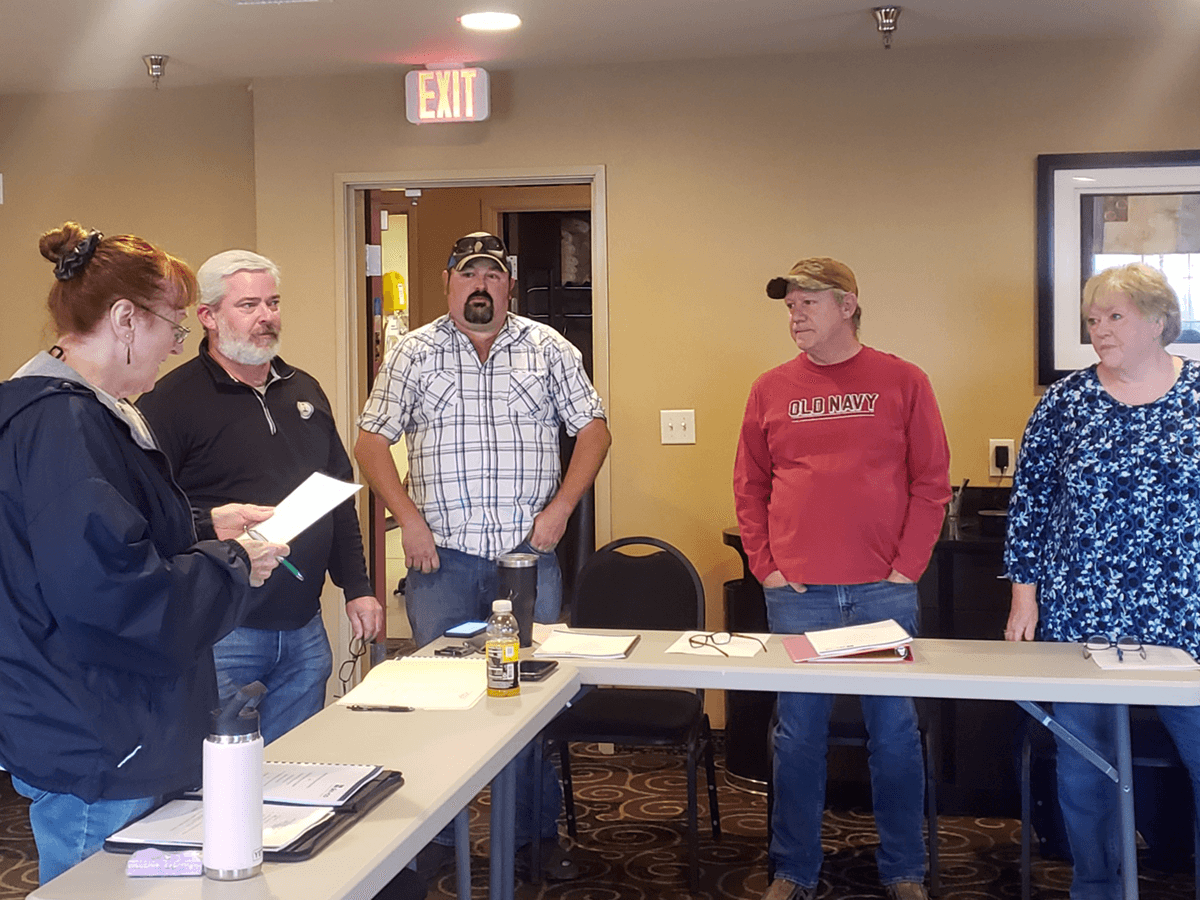 After a year filled with contentious issues that has set the Kiowa County Hospital District back not only financially but also with the confidence of the people they serve, some positive news is starting to emerge. Finally, a few changes are occurring that is breathing life back into the organization, and it began with the appointment of interim CEO Jeanette Filpi some five months ago.

It continues with the swearing in of four new district board members last Tuesday evening. The only veteran board member is now Mary Eikner who will be joined by four newbies, although two of them have had some hospital board experience in the past.

The future stage at the re-organizational meeting of the Kiowa County Hospital District was set with a new leadership team, under the guidance of Filpi, on one side of the table and a new five-member board on the other.

The first order of business was to swear in the four new board members making a sweeping change in the leadership of the district. Those sworn in included Pam Cole, Karl Eikenberg, Doug Uhland and Matt Prince. Prince was chosen to head up the board as Chairman. Eikner will serve as vice-chair and Pam Cole was chosen as secretary.

Then the business began as the board received the annual audit report provided via zoom by the district’s auditor. The report was generally positive news as the auditor pointed out the district is in good financial shape, thanks to the injection of federal Covid funds that were spent correctly and judiciously, although visits to the medical clinic has dropped off fairly substantially since the multi-faceted issues from the past year came to a head.

After receiving the positive information that this new board and the new leadership team have been blessed with a stable and strong financial status, they then discussed ideas and programs they are injecting into the system that they hope will continue to improve on the number of patients they see in a given month.

The main discussion turned to the issues the new board felt were hampering the district including the lack of steady, reliable providers. Filpi has made it a priority to work with Docs Who Care so that they can maintain the same quality doctors and providers who work in the district so that the patients can develop relationships with them. In addition to district providers Abby Huff and Morgan King, Docs Who Care is scheduling consistent providers who concentrate on the Eads facility.

Each member of the leadership team made reports to the new board members. They included reports from Beth Spady, Director of Payroll/Human Resources, who said the election has been certified and all paperwork completed; CFO Shannon Lessenden reported on the monthly expenses and revenues and informed the new board members the processes that will be required by them; CNO Rachel Bletzacker reported on a number of items of interest including the fact that she’s been working with Filpi in order to improve the way they utilize the 340B for prescription drugs. Bletzacker stated, “I feel we’re leaving some money on the table.”

The Medical Clinic director Shaylynn Compton reported on the renovations being done in the clinic and the work they are doing with the new providers who are assigned by Docs Who Care. She also relayed the hospital and clinic employees are working collaboratively in both facilities.

Finally, CEO Filpi gave her report that included a number of topics of interest. There were three key topics that can mean big things for the future of the hospital district. They include the start of construction for the duplexes that the hospital is building, hiring of a full time CEO and some possible significant funding for a future hospital facility.

First, Filpi told the board that the lot where the duplex is being built located on the corner of Luther Street and 12th Street is ready to go and construction is scheduled to begin June 6. There will be two modern living spaces completed that will help the district attract providers and quality pool nurses.

Filpi then informed the board that they will have possibly up to 5-6 exceptional candidates for the permanent CEO position. Filpi said her contract is up on July 25 and the board will need to become very active in looking over the resumes and applications. “You are extremely blessed to have received this quality of interest in the CEO position,” Filpi told the board.

The board formed a CEO Hiring Committee consisting of Prince and Eikner in order to look over the initial applications and to begin the hiring process. Uhland stated to Filpi, “We are very happy with your work and hope you might consider staying a little longer.” Filpi was non-committal but told them all options can be on the table, however, they must start making some important decisions soon as to hiring a permanent CEO before July 25. The committee will report to the board and more will be known in the June meeting about their progress.

Filpi then gave the board some excellent news about the progress she has made concerning a proposal she submitted into the Congressionally Directed Spending program. Filpi said, “This funding request has to go through our senators and there is a lot of public disclosure involved.”

She submitted her plan to both Senators Hickenlooper and Bennet on April the 7th. They called her numerous times, and she had the assistance of other groups. She made a huge ask—150,000 square feet and $70 million for a new critical access hospital and medical clinic that includes housing units for visiting providers and doctors. Both Hickenlooper and Bennet’s offices have informed her that they are moving the project into subcommittees meaning this is a big step forward toward possibly receiving the funding. Filpi closed by saying, “If they would approve some form of spending for a new facility, you as a board have some fast and important decisions to make.”

In a three-hour meeting, the new board members took a lot of time getting up to speed with the financials and better acquainting themselves with the programs and job requirements of the leadership team. It seems they will have an exciting tenure of opportunities in the coming year, and so far, this board is taking their giant responsibilities very seriously.