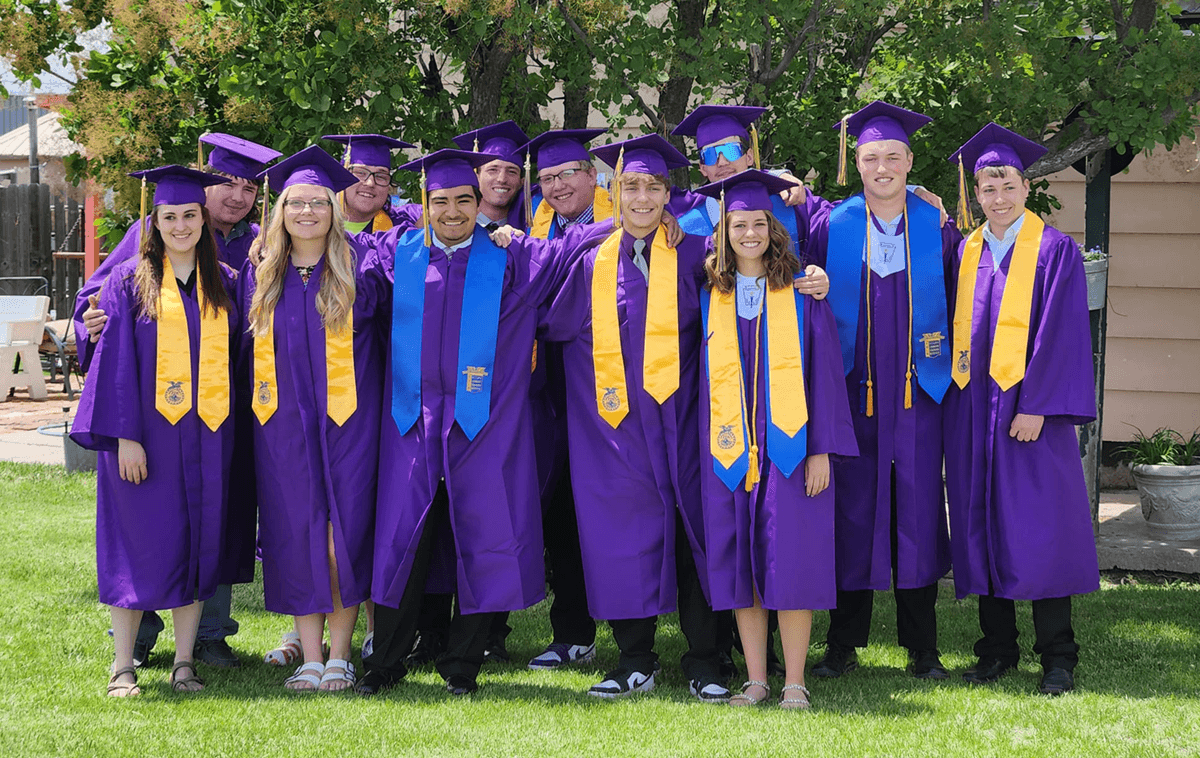 On Saturday May 28th 2022 with a crowd of friends, family, educators, and alumni in attendance 12 bright, energetic, and witty young adults made their way down the aisle as Nancy Walker filled the air with the processional playing of “Pomp and Circumstance.”

An invocation given by Rhealie Rittgers opened the ceremony, followed by the Pledge of Allegiance led by Ty Wilson. Ty then welcomed the audience and left a few words for each of his classmates as well as for others to remember him and their class by, “If it’s due tomorrow, do it tomorrow.”

Superintendent Glenn Smith then introduced each of the members of the Kiowa County School Board RE: 2. Ralph Berry, Keith Crow, Shawn Kraft, Holly Michek, Darci Johnson, and Jessica Sierra. The final member, Dustin Uhland was unable to attend. Smith noted that this graduation would be extra special for two members of the board as Jessica Sierra and Darci Johnson would hand their oldest sons their diplomas. With this mention, he presented the two members with boxes of tissues as a heartwarming gag.

The 2022 Senior class teacher sponsor Dr. Joe Wagner introduced Ross Brown to the stage to address the crowd and his class as the Senior class salutatorian. Ross quoted an anonymous Greek proverb, “Society grows great when old men plant trees whose shade they know they shall never sit in.” I feel as though we, the class of 2022, have both planted those trees amongst ourselves, and will continue to plant those proverbial trees throughout the lives we are only just beginning.”

Dr. Wagner took to the stage once again to then introduce the Senior class Valedictorian, Rhealie Rittgers.

Rhealie took her time to reflect on an essay that was assigned to the class at the beginning of the year by their English Composition class teacher Kelly Courcamp about the art of procrastination. The thoughtful and witty speech poked fun at members of the class getting work done with little or even no time to spare. Rittgers thanked members of her class, her parents and grandparents, as well as members of the staff who were key in her success as a student at Eads High School.

Superintendent Smith and President of the school board Ralph Berry presented to the crowd the credentials for each of the graduates of the Eads Class of 2022 stating they had met all requirements by the State of Colorado. With that, Smith began to announce the members of the class to receive their diplomas. Eads High School Principal Brian Bohlander presented each of the students’ awards and informed the onlookers about their future plans.

It is interesting to note that this class of 2022, after living through the social ground swells and negative job outlooks present due to the pandemic has wisely chosen, for the most part, to become workforce ready and skills-based trained. This is a practical response to their given situation and affords them the opportunity to train for a job skill without spending a fortune on tuition and then applying those skills out into the workforce as productive, and financially strong, citizens.

Ross Brown- Ross plans to attend Colby Community College in the fall to pursue his degree as a physical therapy assistant. Ross is the recipient of a $750 Scholarship from KC Electric.

Kylie McKibben- Kylie plans to attend Colby Community College in the fall to begin pursuing her RN certification through the Associate’s Degree in Nursing program. Kylie is the recipient of the Kiowa County Hospital District Employee Fund Scholarship for $500.

Kyra Sheridan- Kyra plans to attend Pikes Peak Community College to major in Radiologic Technology and earn her Associate’s Degree. Kyra then plans to attend UC-Memorial School of Radiology in Denver to earn her certification as a Radiological Technician. Kyra was awarded the Southeast Colorado Power Association Scholarship for $1000 and presented with the Eads Alumni Association $500 Scholarship by Dawn James.

Donte Sierra- Donte plans to attend Mid-Plains Community College in McCook, Nebraska to pursue his HVAC certification. Donte has received the William Glover Memorial Scholarship for $500. The family of William Glover would like to let Donte know that they chose him because he is going to school for HVAC, which is what Bill was doing when he was killed. They felt Donte was a perfect choice for a scholarship recipient in Bill’s honor.

Chase Stolzenberger- Chase plans to attend Otero Junior College to pursue his criminal justice degree and be a part of the wrestling team. He then plans to attend Chadron State to continue his degree and wrestling career. Chase has been given a Wrestling Scholarship for $2686 per semester, renewable for up to four semesters. $10,744 total for 2 years.

Ty Wilson- Ty plans to attend Northwest Kansas Technical College to pursue his Associate’s Degree in Electrical Technologies. Ty was awarded the Southeast Colorado Power Association Scholarship for $1,000. Ty also received the William Glover Memorial Scholarship for $500. The family chose to give two scholarships this year and were very pleased with all the students applying. They chose Ty because he expressed that he wants to return to start a business and give back to the community, which made them very happy and is the reason why they chose to award two scholarships this year. Ty is also the recipient of GN Bank Scholar-Athlete Award for $750 and the Kiowa County Conservation District Book Scholarship for $250.

The lights were then dimmed as a slideshow was presented of the graduates’ lives thus far up to this point. Memories are poignant and this one had many people smiling and crying a few tears, as well.

Cade McDowell then went on stage to lead the seniors in the changing of tassels. The ceremonial moving of the tassel from one side to the other of the graduation cap symbolizes the student’s advancement from candidate to graduate. These 12 young men and women each earned the right to take their final stroll across the stage at Eads High School and to turn their own tassels as they have completed their high school requirements.

Kyra Sheridan then offered a Farewell speech to her class, the underclassmen, the faculty and staff at the Eads Schools. Kyras speech much like those of her classmates speeches before hers highlighted the hard work out in by those who often work behind the scenes within the region. Bobby, Daryl, Nancy, and Jennifer who all work to keep the school clean, functional, grounds well kept as well as busses running.

Huddled together for one last time as Eagles, the class of 2022 tossed their caps in the air and shot off confetti filled cannons to commence their graduation celebrations.