“It was the best Bash ever!” That was the sentiment of the hundreds of people who came out to the Maine Street in Eads on Saturday for the 16th annual street festival. After a pandemic shut the Bash down in 2020 and the wrath of Mother Nature played havoc on the Bash in 2021, it was a perfect—mild and cloudy with a slight breeze—day for the Bash 2022.

The Maine Street Bash has become an annual end-of-summer street party and this year made some major growth spurts in its offerings. This is not only thanks to the Crow-Luther Cultural Events Center (CLCEC) board that organizes the event—but also to the dozens of people who get involved, helped out and worked hard to make the event a huge success—so much so that it is known far and wide in southeastern Colorado.

The Maine Street Bash is an annual fundraiser for the CLCEC, a non-profit organization that depends on donations, fundraisers, grants and volunteers to stay in operation at the Plains Theater, the Maine Scoop Ice Cream Shoppe and in the future an events center, full commercial kitchen for various kinds of dining, and a community workspace.

Thanks to the generosity of the sponsors and the energetic help from dozens of volunteers this year there was a lot to do, a lot to see, a lot to eat and drink and a lot to like.

New to the Bash this year was the Gloria Peck Memorial Quilt Show and what a success it was! There were nearly 30 quilts entered in the competition in 5 classifications. There was also a People’s Choice Award voting for a dozen Quilts of Valor on display inside the Eads Senior Citizen’s Center on Maine Street. All proceeds were given to the local Quilts of Valor Quilting Guild that pays for 100% of the quilting material and gives freely of their abilities in order to create beautiful quilts for the area’s Veterans. The Kiowa County Museum, located in the Bash area on Maine Street, displayed 12 antique signature quilts from the depression era. In addition, they had biographies of many of the women who worked on those historical quilts available for reference. Finally, the Peck Family set up a beautiful display of Gloria Peck’s quilts and projects inside the Eads Senior Citizen’s Center. Gloria, who passed away earlier this year, was a prolific quilter and kept a memory journal and picture book of every quilt she made through her life. The display was truly spectacular and illustrated how much love and devotion Gloria had toward her family, friends and fellow citizens. 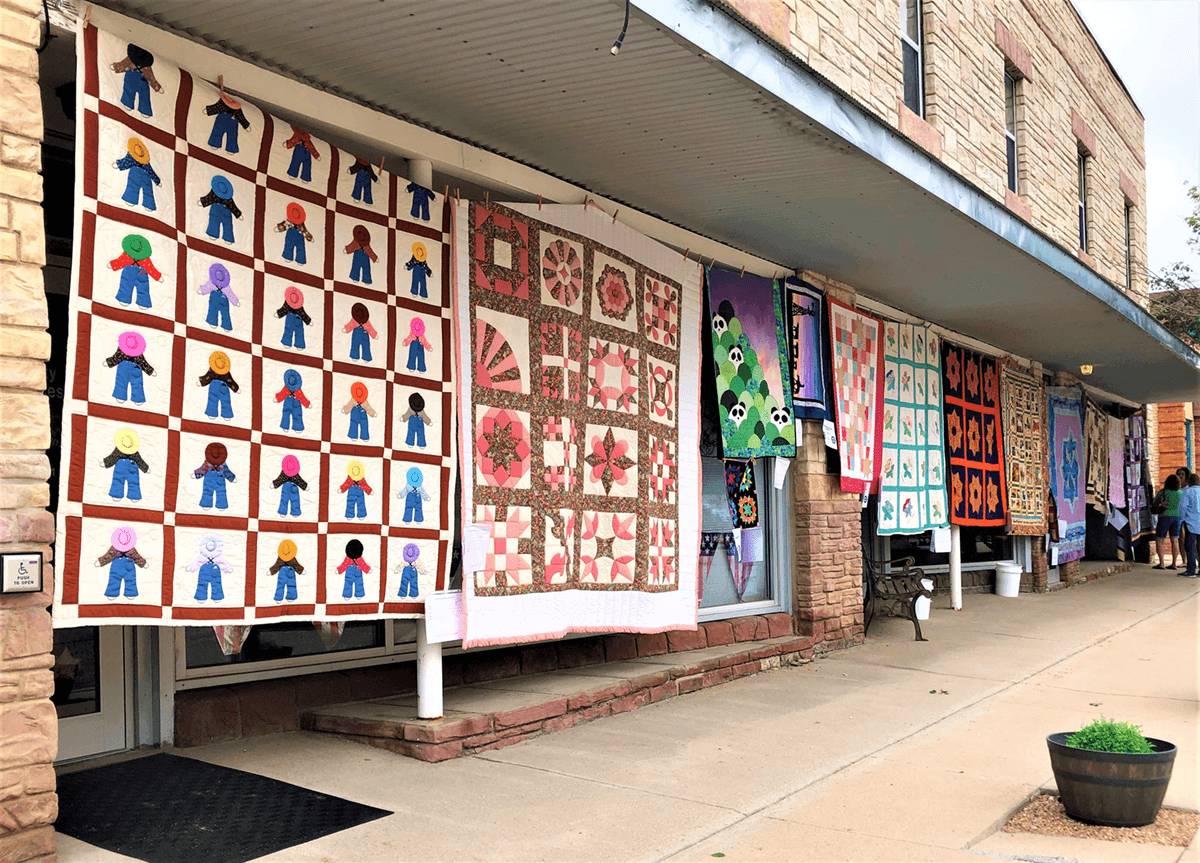 The winners of the 1st Annual Gloria Peck Quilt Show

The Maine Street Bash Car & Motorcycle Show was slightly smaller this year but had a great collection of muscle cars and antique cars that made an impressive display on the street between 13th & 12th Streets. The CLCEC is thankful for Krystal Eikenberg and Karl Eikenberg who have given their time to organize and run the show for the past two years. 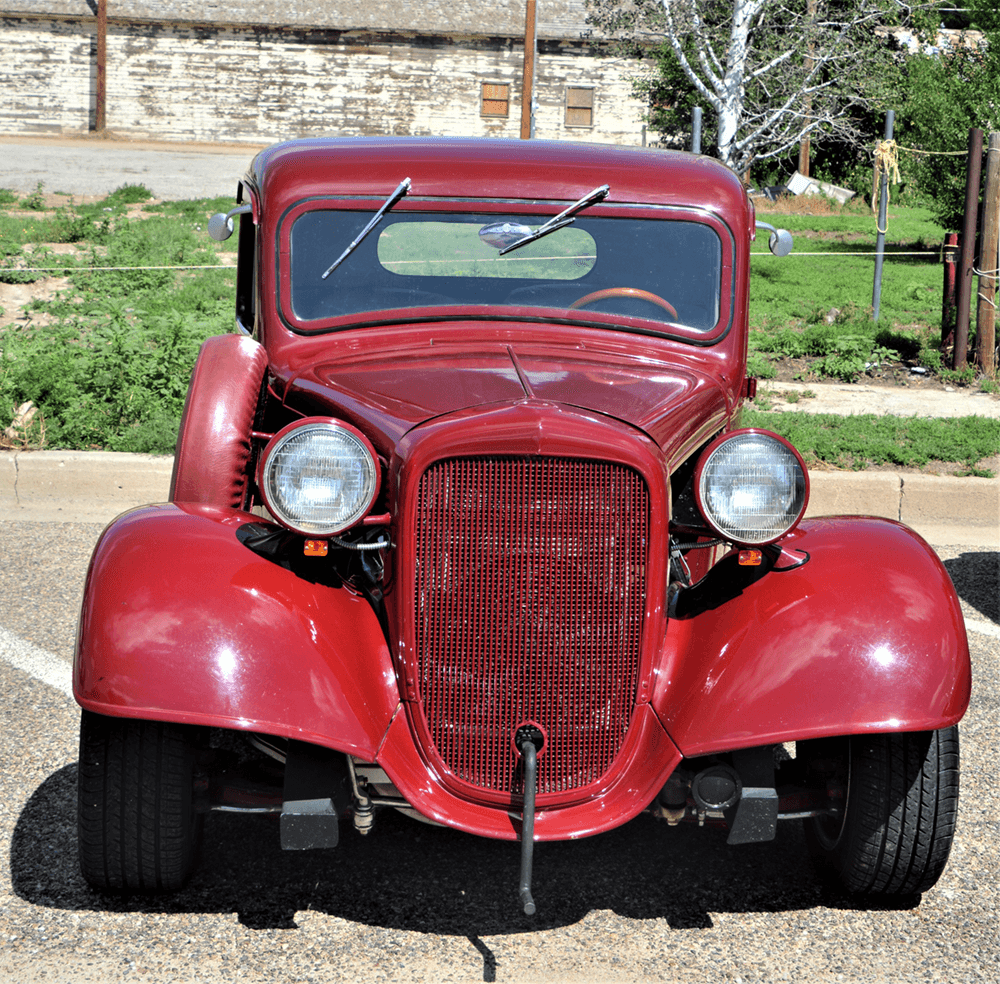 The KidZone was one of the best in years as the City Park was added to the Bash area and included a number of waterplay areas where the smaller children could happily splash away. The County brought two of their magnificent blow ups and put them on 14th Street right by the park where the older children enjoyed climbing and racing on the obstacle course. There were also a number of fun games for the children including pickle ball and putt-putt pool. Debi Derby created an amazing fun shooting game courtesy of her magical laser machine. The kids had a blast shooting at targets with guns that Derby’s machine created. Bob Alfano spent hours running the dozens of kids through the Bash Track in the county’s Barrel Train to the delight of the children. The face painting by Edi Nordquist was a hit as was the numerous vendors who catered to the children with fun items for sale and giveaway.

All the vendors that joined in this year’s Bash were successful. The Town of Eads had a lot of drawings for their fundraiser to go toward the building of the new Eads Swimming Pool. They also brought in some very friendly contractors from Kansas, the Carrother’s Construction Company, who will be building the pool. These individuals were a wealth of knowledge as many citizens fired question after question at them seeking to learn more about the pool plans. ES Tech gave away $50 fuel cards in a drawing and had plenty of information to give out about the new internet fiber that is now being installed in Eads and the outskirts. Buller Mobile Tire Repair gave away gifts and had some drawings. This new business is such an asset to the community, but many were happy to learn more about what they do. The Cornerstone Resource Center gave out gifts and great information about their social programs. FFA gave away cold water to the kids, and the Booster Club was there in full force selling their Eagle gear. Baked goods and craft items were sold by Glenda Stoker, Abby Kiniston and the Frey Family. Finally, the Kiowa County Fair royalty was there raising money to help pay for the many appearances they make as ambassadors for the county.

The Food Vendors literally ran out of food by the end of the event. Food selections were varied and included Mexican Food, Grilled Food, Fair Food and Cajun and Barbeque.

The Plains Movie Theater was a hopping place as they showed free movies with the theme of “Pets” throughout the day culminating with Minions 2: The Rise of Gru where more than 50 children received free popcorn and a pop compliments of the Cheyenne, Kiowa, Lincoln Early Childhood Council (CKLECC).

Later in the evening 30 Cornhole teams signed up for an exceptionally competitive tournament. The Cornhole Committee had to set a maximum limit of 30 teams in the tournament although a few more were interested in competing. This means that this was the biggest Cornhole Tournament they’ve had. 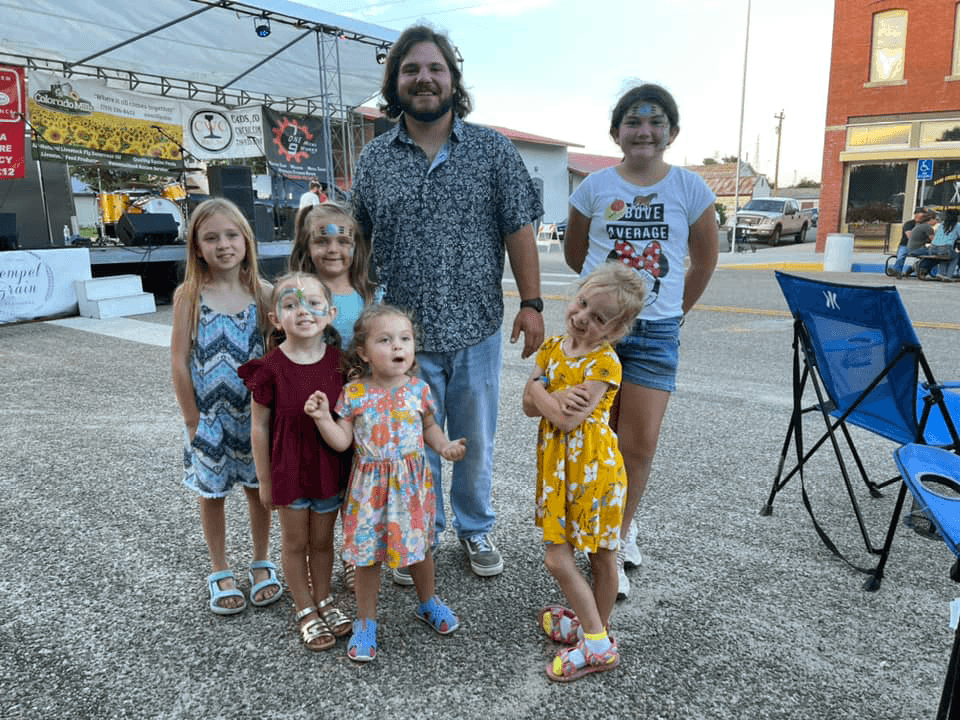 Finally, the entertainment must not be forgotten as this year Trent Rittgers was the DJ for the day portion of the Bash and also helped the bands and stagehands (Marty Miller, Terry Riley, Brian Patterson, Gaige Arnold) set up the large CLCEC Stage for the occasion. Rittgers’ sound was fantastic, and his choice of music was loved by all. The live entertainment began at 6:00 pm with locals Jamie Crocket and Echo Crockett performing for about 35-40 minutes. Their down-home, folksy style is always welcome on the CLCEC stage. Next, the CLCEC was happy to highlight Jared Weeks, a musician originally from Kit Carson who now lives in Los Angeles and who has cut a new album. Finally, at 8:00 pm the crowd welcomed back Rhett Uhland after four years of absence from the CLCEC stage and WOW did Uhland and the Morning Shakes deliver. Their performance was so impressive that they received a number of encores and the people—of all ages—danced throughout the over two hours of music provided by the band from Texas.

This year’s Bash was the best ever! If you think so too don’t hesitate to find the CLCEC board members including Betsy Barnett, Marty Miller, Mary Vasquez, Claire Prince, Connie Shotton, Kim Richards, Charlene Gifford, Alicia James and Nicole Keplar and tell them how much you enjoyed their efforts. It was a good year for the Bash again and reminded many of earlier years when times were good. Maybe that’s an indication of good things to come. At the very least, the Bash-goers left with a positive experience and are now preparing for the start of school, the final harvest, and the Kiowa County Fair & Rodeo coming up the second weekend in September.