The refund, according to the bill, will be paid this year based on the tax return or Property Tax/Rent/Heat Credit (PTC) Rebate application filed in 2021. 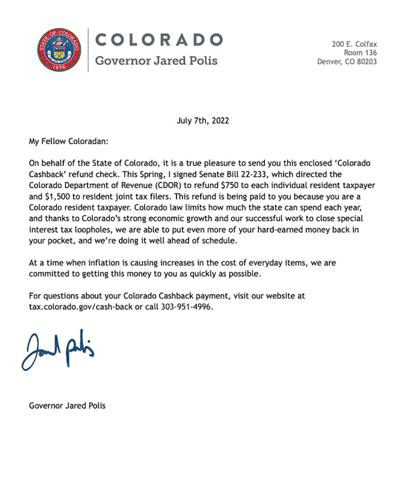 This is a refund of state revenues collected above the TABOR limit. TABOR, a constitutional amendment, was introduced and supported by Republicans and approved by Colorado voters in 1992. Democrats, including Colorado Governor Jared Polis, have been trying to get rid of it pretty much ever since. In fact, in 2019 Polis and the Democrats in the legislature managed to get Proposition CC onto the ballot, which would have let the state keep revenue collected above the TABOR cap. It failed.

The eventual legislation designed to give refunds to taxpayers above the TABOR limit each year was nearly placed on the 2020 election ballot, but there was not a consensus in the wording of the proposal. However, the legislation finally passed in May and was signed by Polis. The excess was more than $3 billion in fiscal year 2021-22 which ended on June 30.

Seems like a positive thing for taxpayers adding to other positive moves by the voters in 2020 when the state income tax rate was reduced from 4.55% to 4.5% and the there was a property tax break for seniors and veterans introduced.

However, this year’s TABOR refund is without controversy as a letter from Polis will accompany the checks that are starting to be sent to Coloradans this week. In what is being called by Republicans as political opportunism heading into the November elections Polis appears to take direct responsibility for the people’s refund.

In the letter Polis introduces the refund by saying he signed the bill into law, and it is now “a true pleasure” to send the refund to the people rebranding it the “Colorado Cashback” refund check.

The Polis letter goes on to tell every single person being paid, “At a time when inflation is causing increases in the cost of everyday items, we are committed to getting this money to you as quickly as possible.”

Further, the Polis letter pats the Governor’s fiscal abilities on the back explaining to the taxpayers/voters of Colorado, “Colorado law limits how much the state can spend each year, and thanks to Colorado’s strong economic growth and our successful work to close special interest tax loopholes, we are able to put even more of your hard-earned money back in your pocket, and we’re doing it well ahead of schedule.”

The Republican opponent to Polis in the November gubernatorial race is Heidi Ganahl who has accused Polis of using state funds to further his campaign. In a written statement Ganahl says, “Using taxpayer dollars for a very expensive campaign ploy is unacceptable.” She further states that the Republicans have filed a campaign finance complaint against the Polis campaign.

The check and accompanying Polis letter to every taxpayer, most who are also voters, will cost $2.7 million, including $1.7 million in postal costs, this according to an Axios report.

Republican Chairwoman Kristi Burton Brown and other Republicans had been complaining about rhetoric coming from Polis and the Democrats taking credit for the refund program seemingly more hypocritical since it was them who had tried to keep the surplus through the Prop CC ballot measure that failed in 2019.

Burton Brown stated in the August 6th newsletter, “Jared Polis is blatantly using taxpayer dollars to help himself get re-elected. They fought to kill and undermine TABOR, but now they are using its benefits to lie to the voters.”

In a conversation last week with Colorado Public Radio, Polis said it was irresponsible to sit on the money for a year instead of releasing it now. But made no reference to the Republicans’ complaint.

October 06, 2022 | Administrator | News
The Kiowa County Farm Bureau has been instrumental in lining up an NRA certified defensive pistol class to be held in Eads staring on October 21st. This is approximately an 8 to10-hour course that ...

Letter to the Editor: Opposing the Charter Amendment to Prohibit Marijuana in Lamar