Letter from the Editor -- Resolutions for Kiowa County

So, the door’s closed on 2016, and 2017 stretches before us.  No doubt, countless people made resolutions in the first few hours of the New Year with every intention of seeing them fulfilled.  History tells us that few actually come to pass in the weeks and months to follow.
It’s difficult to change behavior. Our experiences teach us the rules of life, and, once learned, often guide what we do—and don’t do—from then on.
Take the case of elephants. A man (name unknown) once wrote of walking past several elephants when he was struck by the observation that the huge, magnificent creatures were being held by only a small rope tied to their front leg. It was obvious the elephants could have broken away from the ropes at any time. But they didn’t. The man saw a trainer nearby and asked why the beautiful animals simply stood there, making no attempt to be free. “When the elephants are very young and much smaller,” the trainer answered, ”we use that same size rope, and it’s enough to hold them. 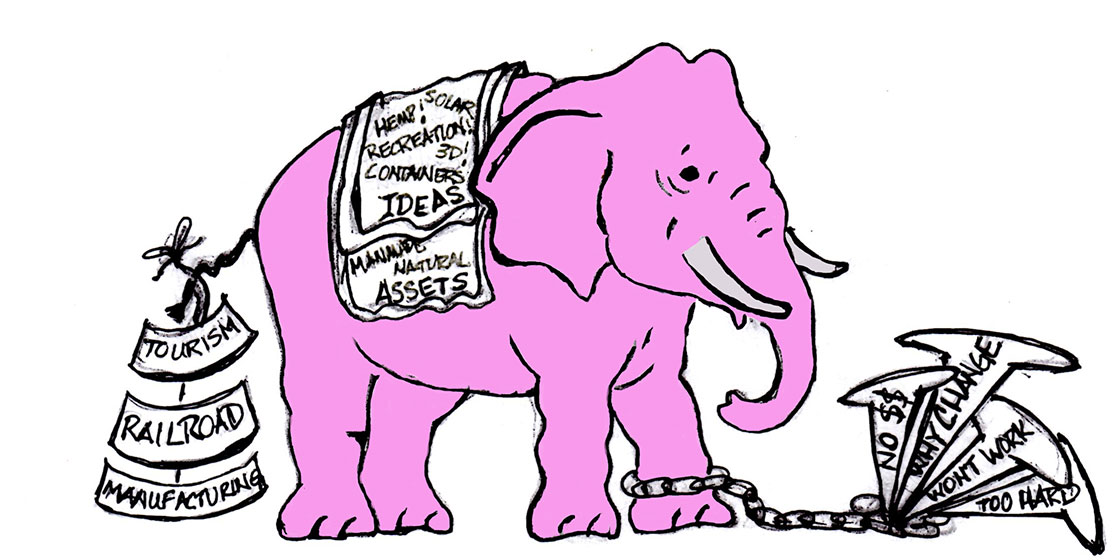 As they grow up, they’re conditioned to believe they can’t break away. They believe the rope can still hold them, so they never even try.”

In a way, this issue of The Independent is about elephants--actually, one elephant, in specific: that big, pink one in the living room that people prefer not to discuss.  It’s an understandable reaction.  Elephants--like uncomfortable, unpopular or controversial subjects--can be tricky. Poke them in the wrong place, and you can get whacked with a trunk before you even see it coming.  But the Indy staff is willing to take that risk.  Doing something truly important, such as having a frank discussion about the future of the Kiowa County community, is always going to involve a measure of risk.

Locally, 2016 delivered some cause for optimism as several new businesses opened and a cornerstone business expanded current operations. But this is a very difficult time for rural communities with economies based on single industries that are in trouble, like agriculture or mining and gas/oil.  That, essentially, describes Kiowa County.  Our local economy is primarily based on agriculture with more than half of employment (53%) related to farming/ranching and 77% of the population described as self-employed.
Agriculture in Colorado is facing its most serious challenge in more than half a century with crops bringing low prices while the cost of growing the crop is high. Agricultural economists predict it may stay this way for the next two to three years.  As described by Dr. Dalsted, CSU Professor with the College of Agricultural Sciences Agricultural and Resource Economics, in order to continue operation, some farmers and ranchers may have to access funds accumulated from several previously good years. Others will be unable to make payments on operating loans.
The near record low price of oil is another problem, felt most strongly in those western slope counties that relied heavily on gas/oil production. Unfortunately, Kiowa County didn’t dodge the bullet on that one, either, and it’s not just hitting those individuals relying on payments for drilling.  Assessed valuation of property throughout the county was impacted, and the result is evident in recent cuts to the county’s budget.
When facing the reality of an economy in crisis, the tendency is to hunker down, cut back on spending and simply try to make it through until times improve.  That’s a fiscally conservative reaction that has clearly worked before. But it’s also a crisis-based, short term reaction that gambles on the ability to survive being greater than the challenges.  And let there be no mistake: at the countywide level, that gamble has costs of its own, often in the form of job loss, business failure, a decline in the population of working adults, families and youth and reduced property value.  As the sole response to the crisis, it does nothing to build a future that is more insulated from the cyclic nature of economies.
Some rural communities in Colorado have learned this lesson, and they’re not just surviving the current struggle, they’re actually winning. At its most fundamental level, some of their success can be attributed to one fundamental approach.  And it’s an approach that the first settlers in Kiowa County understood at the deepest level.
As many people know, the town of Eads, originally called Dayton, was located near Kiowa Springs, about two miles to the southeast and chosen for its proximity to the anticipated Missouri-Pacific Railroad line.  But when the tracks were actually laid, they were laid two miles to the north.  So, the homesteaders moved the town—which included 40 houses—up the hill to the new location and named it New Dayton.  All was going well. The work train came through every day; both town and residents were prospering. However, when the construction company for the railroad came, they laid out a town site a mile and a half to the west.  So, they moved the town again, which now included more houses, the Goff Hotel and a significantly larger commercial district.  As one homesteader wrote of his experiences, “We had no choice. We had to do it.”
So, what did the people in (what would later become) Kiowa County in 1887 have in common with successful small towns 130 years later?
They started off with an aspiration, a collective vision of what they wanted their town to be.   When that didn’t work out, they didn’t simply hope the railroad would change their mind or settle for being a railroad town that just happened to be located two miles south of the actual tracks.  They held on to their vision and collaborated, working together as a community to make it happen.  Even when that first move didn’t pan out, they still didn’t give up.  They continued to aspire “for more”.  With nothing but their creativity, their work ethic, their passion for the town, their agreement to be “in it together” plus shovels, skids, horses and mules, they moved the town.
In other words, they were resilient.  They adapted.  Twice.
In December, the University Of Colorado Leeds School Of Business in conjunction with the Colorado Office of Economic Development and International Trade published results of the “Rural Economic Resiliency Study”.  The study analyzed 64 Colorado counties and conducted 13 focus groups in rural counties throughout the state to determine factors that contribute to a rural community bouncing back after an economic downturn.
It’s no surprise that the “hurdles” listed in the study are equally present in Kiowa County, but there’s some encouragement, as well.  Of the 6 assets that drive economic resiliency, Kiowa County has 4: quality of life, quality education system, availability of quality healthcare and access to major transportation—all of which deserve comprehensive community support. 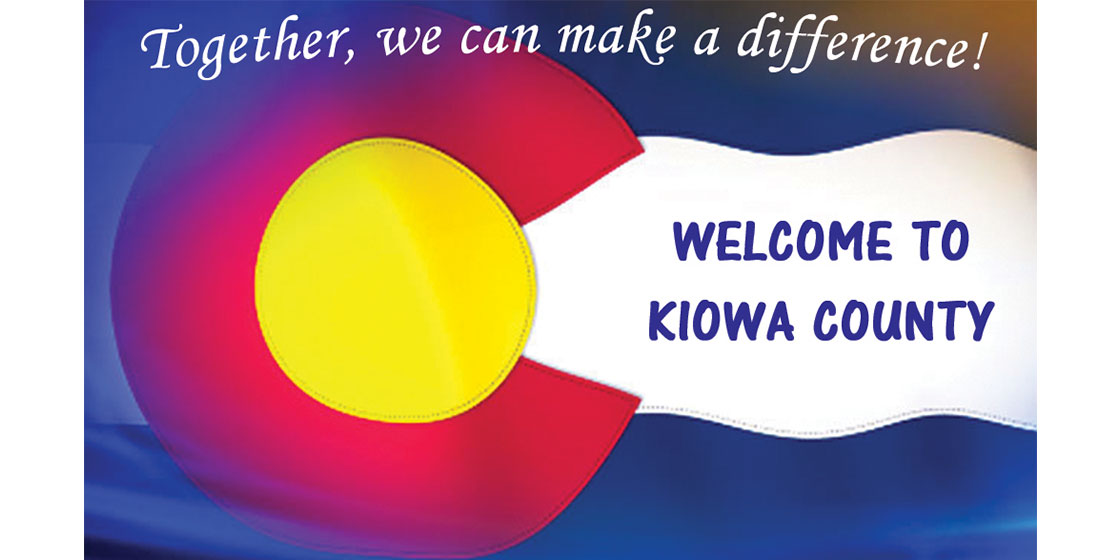 However, the remaining 2 components—community leadership and industry diversity--are undeveloped, at this point.
This issue of the Independent and others to follow will contain a number of different ideas focused on adapting existing industries and building new ones.
However, “can do” and “doing” are different things, and turning one into the other requires all those things displayed by the first homesteaders:  a vision, willingness to seize an opportunity and take risks, collaboration and the commitment to seeing the vision become a reality.  It’s no coincidence that those characteristics are found in community leadership.
No newspaper can create that.  Leadership needs to emerge from the community itself.
There are people in the community who have those characteristics and more, but they must be willing to step forward and assume the role.  Likewise, the people of the community must be willing to listen—openly and fairly—and to likewise devote the time or energy or resources they have toward building the community we all envision.
It’s not the intention of the Indy staff to misrepresent the enormity of challenges or to overly simplify complex situations.  Our goal is to simply call attention to that pink elephant and pose the notion that, maybe, those ropes that bind are not nearly as strong as we think they are.
In the end, who knows?  Perhaps, the people of Kiowa County will discover the path forward by recalling the lessons of those who came before.