On grounds of Sand Creek Massacre NHS for group photo of participants in the tribal consultation during the 10th anniversary of the public dedication of the park.  Participants included tribal members of the Northern Cheyenne Tribe of Montana, tribal members of Northern Arapaho Tribe of Wyoming, representatives of the Cheyenne and Arapaho Tribes of Oklahoma, staff from History Colorado Center, an independent film crew, historians, subject matter experts and park service staff. 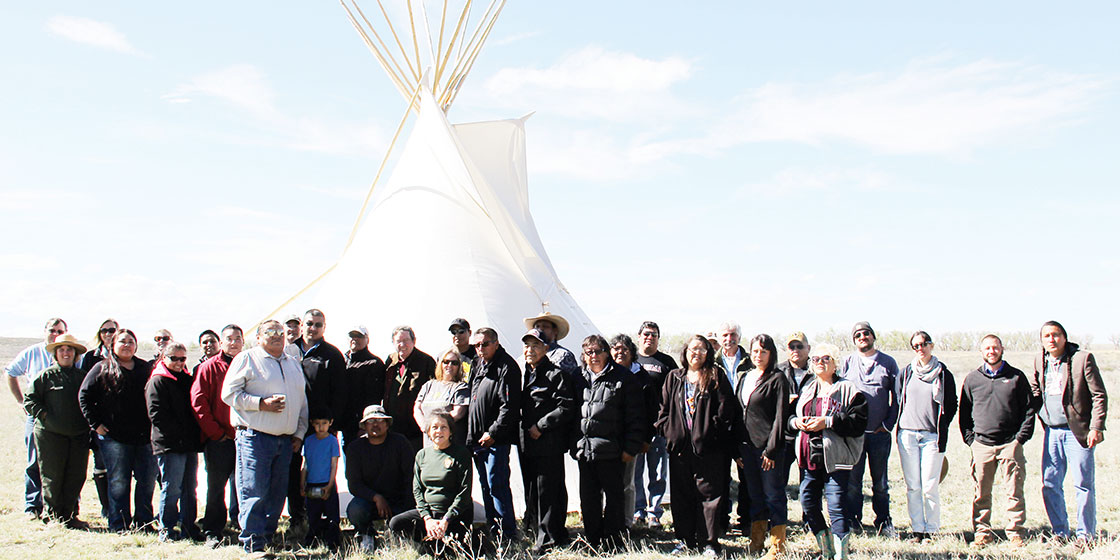 Last Thursday evening, at the conclusion of three days spent at the Sand Creek Massacre National Historic Site discussing current status and future projects for the site, a group of tribal traditional and elected representatives from the Northern Cheyenne, Northern Arapaho and Southern Cheyenne and Arapaho tribes as well as officials with the State of Colorado, the National Park Service, the Colorado Historical Society and a Kiowa County Commissioner gathered together at the Crow Luther Cultural Events Center.

Following a reception in the lobby, people took seats in the theater to listen to the words of those invited to speak.  Much of what was shared could be best described as a retrospective, not just on the previous three days but also on the ten years that have passed since the site of the Sand Creek Massacre was originally dedicated as a national historic site.
Karen Wilde, tribal liaison with the National Parks Service, opened the evening by welcoming those in attendance and then introducing those speakers who were seated on the stage.  As is customary, the discussion was opened with a prayer. William Walks Along of the Northern Cheyenne Tribe was asked to say the prayer, a request he described as an honor and fulfilled in his characteristically soft voice and wise ways.
Alexa Roberts, Superintendent with the National Park Service and someone who has been involved with the site since the idea was first conceived, stood at the podium.  In her somewhat different but equally calm way, Alexa briefly thanked all those who had helped during the last three days, including “friends and partners” in Kiowa County, the town of Eads and the Kiowa County Economic Development Foundation who, despite their very busy days, “still took time to help with catering, preparing the theater and other things to make [their] stay comfortable”.  She also acknowledged the work—done at 110% effort—by the 9 staff members of the National Park Service who represent the NPS at their finest.  She also stated that, “at the Sand Creek Massacre National Historic Site, we have been exceptionally honored, humbled and proud over the last ten years to be a part of this fantastic community and to provide stewardship of one of the most significant places in the nation”.  She further stated that the panel of experts on the stage had been with the project since the beginning and had different perspectives those in attendance were honored to be able to hear.  She then introduced Dick Scott, Chairman of the Board of Kiowa County Commissioners. 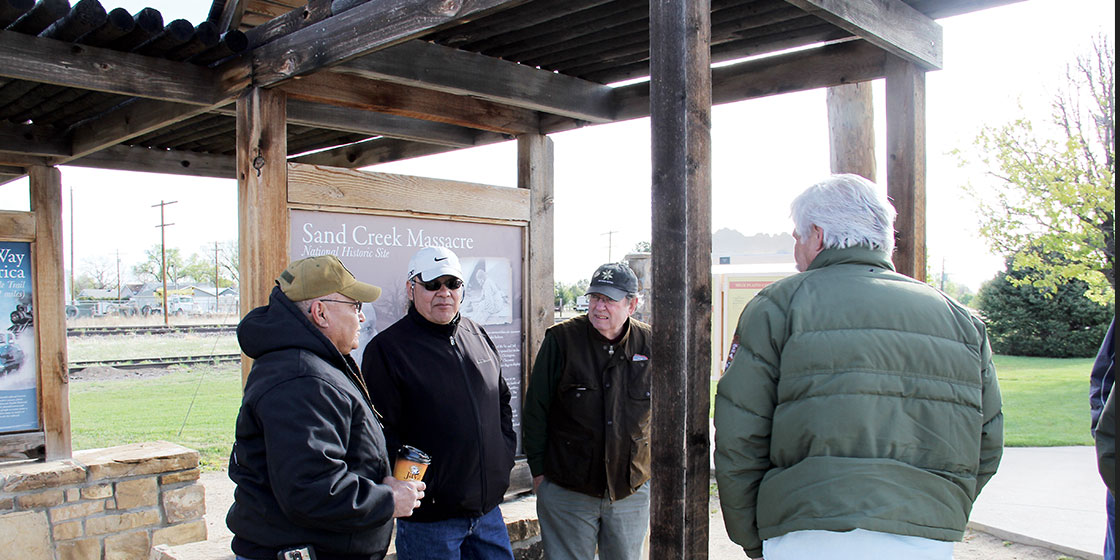 Commissioner Scott opened his comments by stating that, when asked to speak, he had been surprised and somewhat uncertain what to say because he wasn’t sure what he had to offer that would be of any significant contribution.  So, he did what he knew best to do; he congratulated the NPS and tribes for the establishment and development of the site.  He then spoke of being honored that he was asked to speak but, at the same time, hesitant because he wasn’t sure what he could say that would add credence to the event.  But, as he stated, he finally decided to share his thoughts and feelings about the events that occurred in 1864 and the time since then, stating that he feels he speaks not just for himself but for the people of Kiowa County, as well.
What followed were statements about the mixed feelings he holds.  The commissioner said he was glad that the site was established but “saddened” by the event that caused it to be created and gratitude for living in Kiowa County but remorse that the life he enjoys was attained at the expense of the way of life of another people.  He spoke of the “inconsideration and greed” that led to the abandonment of treaties and talked about having a “microsense” of the feelings the Indians might have felt at seeing their way of life disappearing.  He stated that something similar is occurring in rural America as the traditional way of life is being overcome by the ways of life of those who come from other, more urban, places.  He went on to discuss the importance of learning from history and taking advantage of the knowledge history provides to make sure that nothing similar ever happens again.   He also spoke of the benefits that come with the establishment of the Sand Creek Massacre National
Historic Site, not the least of which is its ability to provide a “complete and whole understanding” of what happened in hopes that it will teach current generations and those to come. 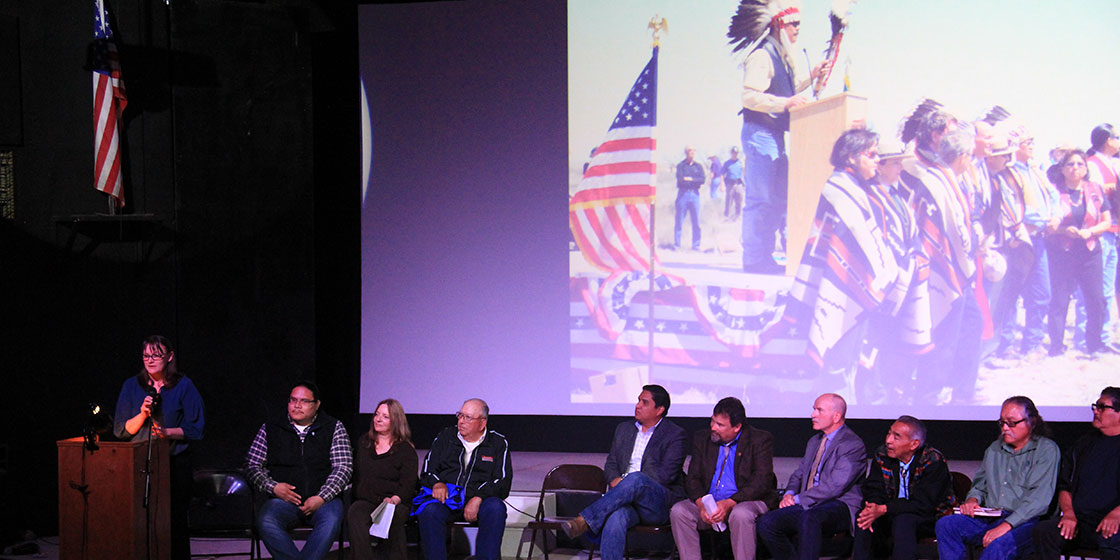 Ernest House, Jr., Director of the Colorado Commission of Indian Affairs, then addressed the audience by recalling his experiences with the creation of the site. He then went on to tell “a story that must not be told” that concerned events occurring in November of 2014 when Governor Hickenlooper decided to, on behalf of the state and, as it turns out, all other governors still living, officially apologize to the tribes for the events that took place 150 years before.  As Mr. House described it, the governor was deeply aware of the magnitude of such an act and the decision to apologize was made only after an entire night spent in thought and consultation, and, in so doing, assigned the profound meaning to the apology that it so rightly deserved.

Among the others who spoke, there were three men whose words had especially significant meaning.  William Walks Along of the Northern Cheyenne tribe (Montana), Al Addison of the Northern Arapahoe tribe (Wyoming) and Joe Big Medicine, Junior of the Southern Cheyenne and Arapaho tribe (Oklahoma) each spoke of their unique perspectives on the massacre, the creation of the Sand Creek Massacre National Historic Site, the lessons learned and relationships formed in its establishment and reflections in the ten years that have passed since then. 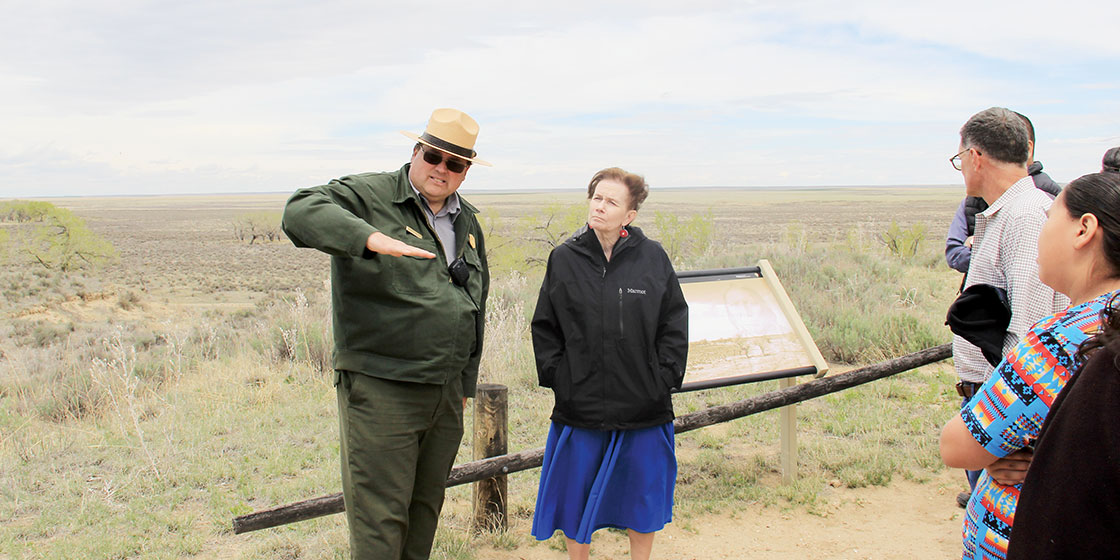 Short of repeating their words verbatim, it is difficult to summarize what they said in a way that would do them justice.   The closest any attempt to do so can get—and that attempt is not, in any way, close, at all—is to discuss what impressions their different words had on some of the people from Kiowa County who heard them.  For some people, they heard words of deep and lasting sorrow at what had happened and determination, even in the presence of such sorrow, to “move forward”.  Others heard reflections on the difficulty of trusting people who “try to get close”, a closeness that can cause suspicion because it comes without the real closeness experienced when one person grieves with another for the loss they have known.  Still others heard a lingering anger at injustice that is still on-going today as brothers and sisters were forced to endure harsh, cruel treatment at Standing Rock while, similar to November 1864, few people with the government, if any, did anything to stop it.
While they spoke, a fierce rain fell outside, and it seemed fitting in a myriad of ways to what was being expressed outside.
At the close of the evening, there were photos, handshakes and promises to see each other in November, if not before then.  And so, another anniversary passes and one can only hope it marks another year of healing and understanding.

Letter from the Publisher as We Begin Our 8th Year

February 01, 2023 | Betsy Barnett | News
Eight years ago, I was working as an administrator at Eads High School and loved my job. My favorite part had always been working with the kids and leading a talented and dedicated group of educato...

February 01, 2023 | Raina Lucero | News
In January the Colorado Department of Human Services announced that the State of Colorado will be ending the Supplemental Nutritional Assistance Program (SNAP) emergency allotments along with other...

Letter to the Editor: Rod and Byron Pelton

January 25, 2023 | Rod and Byron Pelton | Letters to the Editor
After listening to the Governor’s State of the State address this morning, both my cousin and I were in dismay at the lack of importance given to our agricultural sector. Now to Governor Polis’s cr...

January 25, 2023 | Kathy Pelton | News
Call them The Three Amigos. Call them Perry and the Peltons. Or call them The Cheyenne County Cartel. However you look at it, it is quite an extraordinary thing that 3 of the 35 Colorado State Sena...