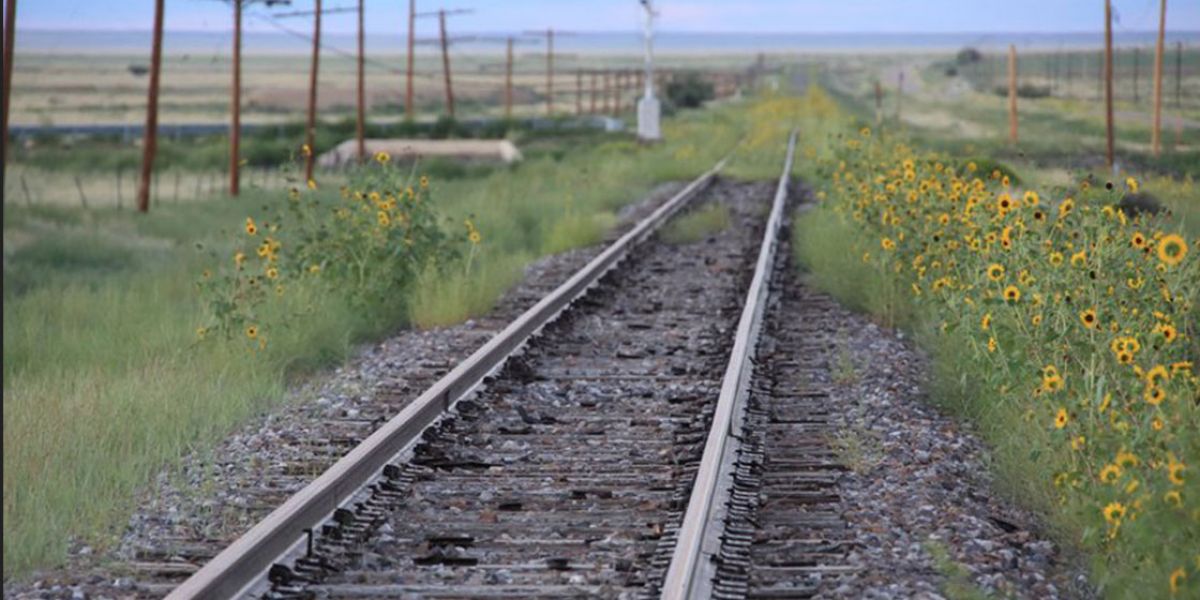 ﻿ “I HEAR THAT TRAIN A-COMIN’…” THE STORY BEHIND THE STORY

Freight trains are, on an average, over a mile long which makes these massive machines neither quickly nor easily stopped.  In fact, an average freight train going 50 mph will take at least a mile and a half to come to a complete halt.  With those characteristics in mind, one would assume that an entire railroad—especially one running between 20 and 30 trains a day—would take a good while to stop, as well. 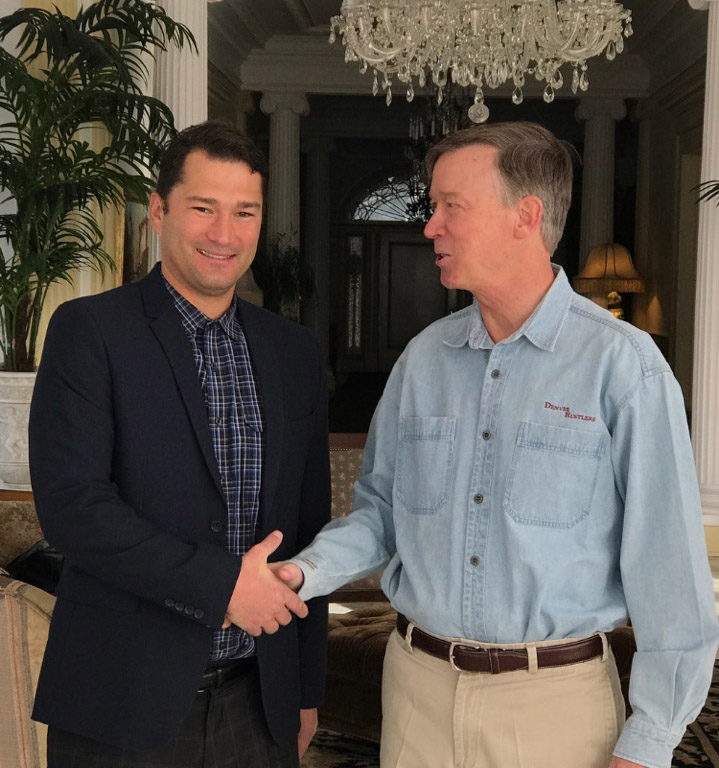 Uh, no.
Powerful men in powerful places can stop an entire railroad in just one day. And that’s exactly what happened about 20 years ago in Southeastern Colorado.
First constructed in the late 1880s, the 122 mile stretch of track known as the Towner line was acquired by the Union Pacific in 1996 as part of its merger with Southern Pacific Railroad. However, the Union Pacific already had one line running across Eastern Colorado; they did not need two.  The state of Colorado stepped in and bought the railroad. The purpose?  To keep it intact.  The state then turned around and sold the railroad—that they had bought to keep from being scrapped—to V&S Railroad, which promised to keep the railroad in service.  However, V&S Railroad is a railroad scrap and salvage company.
“It should never have happened,” states Stefan Soloviev, owner of the Colorado Pacific Railroad, in a recent interview.  “It just doesn’t add up.”  And Soloviev should know. He’s very good with numbers.
Owner of Crossroads Agriculture and listed by the Land Report as one of the top 100 landowners in the country, Soloviev began farming in Wichita in 1999. His operation expanded into Western Nebraska and then Western Kansas.  In 2007, Crossroads Agriculture came to Kiowa County.
“Whenever I was out there, which was pretty often,” he says, “I’d drive over those tracks. That line runs straight west, and that always interested me.  So, I looked into the situation.  I began watching the headlines, talking to some of the locals, just trying to learn what I could.”
By that time, V&S had done what they typically do: put factors in place to make a railroad appear no longer viable, allowing them to make a case to the Surface Transportation Board that a railroad should be abandoned and to justify the move to pull up the track.  In this case, they purposefully made their freight rates so uneconomical that the farmers were guaranteed to lose money.
“V&S never wanted the railroad to run again,” Soloviev says. “They wanted to scrap it and sell the steel.”
Years passed, and, as is his practice, Soloviev came back on a regular basis to manage his acreage. “I kept waiting for something to happen,” he says, “for someone to stop what was going on. But it looked like this thing was going to be done.”
Fortunately, an STB ruling that required V&S wait for 2 years before tearing up the track prevented the company from immediately beginning to scrap and salvage the line.
Meanwhile, Soloviev’s interest only grew stronger.  “I knew I had to make a decision, and I kept thinking…am I going to do this or not? I don’t get into anything unless I plan to win, and I knew, if I got into it, it was going to be a fight.
If I hadn’t stepped in when I did, the railroad would have been gone.”
Thus began a battle that would last for almost three years.  Soloviev’s first step was to obtain a court injunction to prevent demolition of the line. He then took the case to Federal Court and then to the Surface Transportation Board in Washington, D.C., an agency which regulates railroad services and abandonment issues.
It’s uncertain if V&S had ever encountered anyone with Soloviev’s resolve before, but, once they learned someone wanted to buy the railroad and had put money in escrow to do so, V&S’ tactics became more intentional. Despite having no right or legal authority to do so, in 2014, V&S brought equipment into the area, pulling up tie spikes and anchors from four out of every five ties, starting at the Western end of the line.  This step is preparatory to lifting the rails for salvage.
The STB is a non-partisan, independent adjudicatory agency that is charged by Congress with reviewing railroad rate and service disputes and reviewing proposed railroad mergers.  Historically, the agency has been known as cautious and judicious.  There was only one case in recent history—a case in Coos Bay, Oregon—where the STB had gotten involved in the proposed abandonment of such a long line.
The Towner line would be the second.
“It was a very big deal,” Soloviev says of the STB’s reaction.  “When they saw a company come in from out of state and rip apart that railroad with no regard for the history of the line, the jobs it brought, the economic impact on the counties… They’d seen that happen before and they decided, not this time. They forced the sale.” 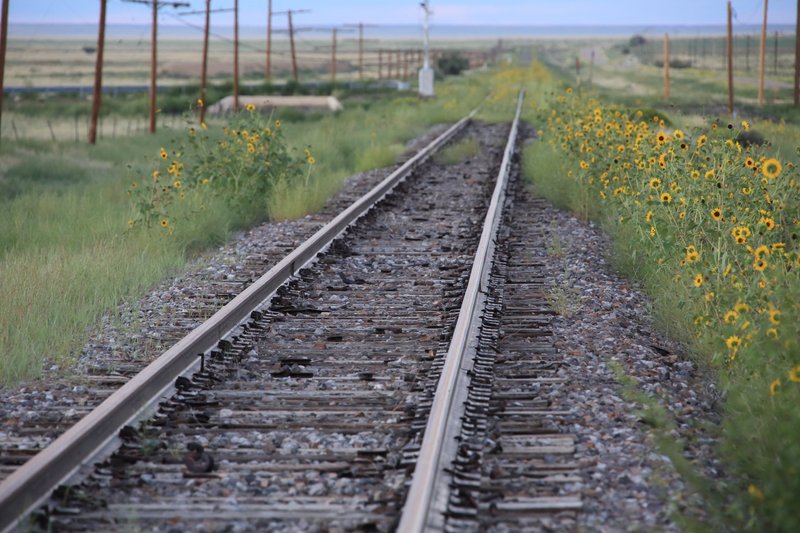 “IT’S COMIN’, DOWN THE LINE..”
With the line now finally and firmly under control of Soloviev’s Colorado Pacific Railroad, he isn’t wasting time to get things operational and has a goal to start running this summer. “I’m not sure if we’ll make it,” he says, “but that’s our goal.”  He’s interviewing operators and has several other railroads interested in leasing the line. But he emphasizes that one thing is guaranteed: no matter who actually runs the railroad, he will maintain oversight of operations.  He anticipates that decision will take one to two months to finalize.
The line itself needs “a moderate amount of work”, including repair of the damage done by V&S plus repair of a small trestle that was accidentally burned in a brush clearing fire. And if there are jobs created to accomplish those things, Soloviev is committed to considering local residents first.
There are also the political realities of resurrecting and making a railroad viable.  Soloviev has addressed that, as well, including a recent meeting with Governor Hickenlooper.  “I told him the whole story,” Soloviev says, “and he was very interested in our positive impact on smaller operations. He wanted to know how he could support what we’re doing.”
Soloviev’s personal plans have shifted from acquiring more acreage to focusing on transportation and building the infrastructure necessary to make the line successful.  More details on that will be disclosed as they become available. In a bottom line type summary, Soloviev says “the railroad has to make money”, but he’s “very optimistic” that the line is going to attract a number of different customers.
So, why retell a story that some people already know?  One answer is obvious:  a story where the good guys win is always worth retelling. Always. But there’s something else that makes this a story to be remembered.
Although resistant to being viewed as any type of hero, there is an aspect of Stefan Soloviev that’s key to how this tale ends.
Soloviev has said, several times, that he can’t stand a bully. And there’s no shortage of bullies in this industry. “In agriculture,” he says, “you’re either enormous or you’re nothing.” And, despite being powerful in his own right, Soloviev has the conviction and the drive to create a level playing field for those who might otherwise find the cards stacked against them.  One might even say it’s a part of his makeup.
“I don’t stop,” he says. “Fighting is a part of life. A part of my heritage. When I was a kid, walking down the streets in New York City, you couldn’t go very far without somebody saying something or trying something. That’s what it was like back then. I have instincts that people from…other places…don’t have.  But in some fights…instincts aren’t enough. You also have to have resources.  This time, I had enough of both. And that’s a good thing.”
A good thing, indeed.
Tweet