This impressive photo was taken at the scene of an extremely aggressive prairie fire located south of Granada. (Photo credit: Hasty/McClave Volunteer Fire and Ambulance Service)

A major wildfire broke out south of Carlton in Prowers County last Saturday afternoon.  It is believed to have started in the vicinity of Road G. By the time it was contained, the fire had consumed a swath of land covering an area 7 miles by 12 miles or an estimated 9,000 to 12,000 acres.  Final damage reports won’t be available until the fire is completely out and air surveillance photos can be taken. 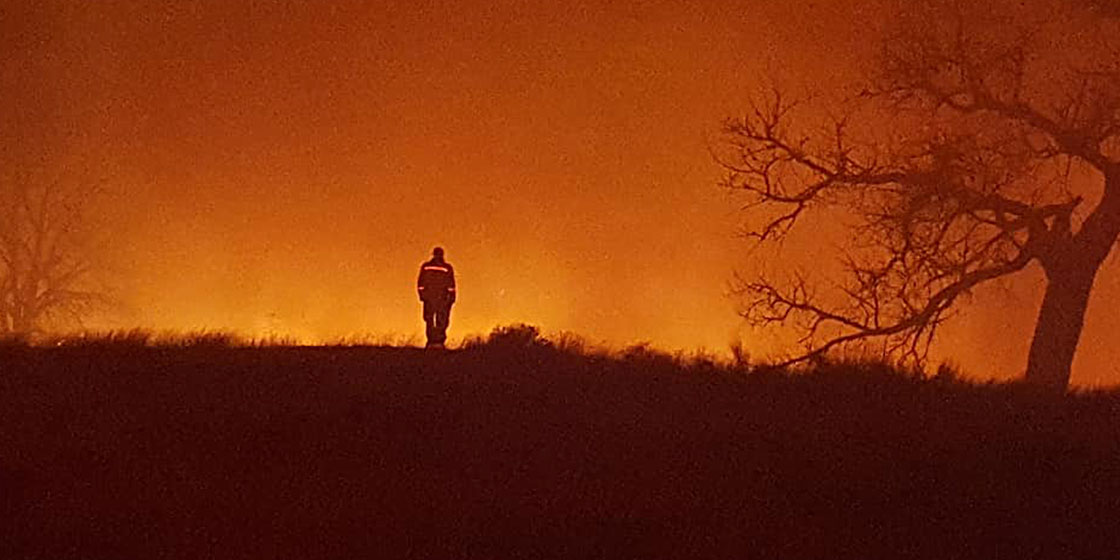 The fire is believed to have started around 2pm in the afternoon.  Given the dry conditions and gusty winds, calls began to go out to numerous fire agencies within an hour after being reported. Ultimately, a number of counties provided assistance, including fire departments from Lamar, La Junta, Las Animas, Hasty/McClave, Springfield, Walsh, Vilas, Towner, Sheridan Lake, Eads, and Hamilton County, Kansas.

According to a Kiowa County Fire Department official, the KC Fire department was called out by 6 pm and reported to County Road 22.  They worked from there to County Road 26 throughout the night.  Kiowa County’s equipment included 2 water units and 1 supervisor unit.  The Kiowa County official, who also worked the huge fire at Chivington a couple of years ago, said, “This wildfire was hotter and more volatile. The winds kept shifting from the west and north, causing confusion for the volunteers.  It took a huge amount of equipment to fight this particular fire including road graders from Prowers County.  Kiowa County didn’t return home until dawn on Sunday.” 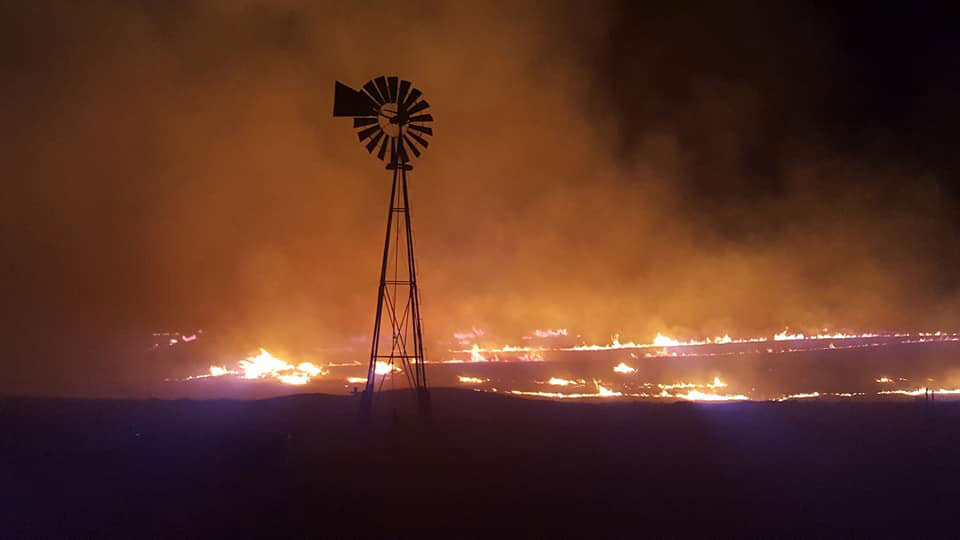 Social media went viral on Saturday night as hundreds of people could see the fire from as far away as Kansas, Holly, Granada, Walsh, Springfield, and Lamar.  Facebook and Twitter became a tool to use to follow the action and find ways to help the fire fighters with their battle.  A resources and food station was set up at the Granada Stop 2 Shop where a generous amount of donations were provided by area citizens.

However, social media did not catch the attention of Daniel and Tara (Spady) DeForest.  Tara, who grew up in Haswell and attended school in Eads, indicated they didn’t see anything on social media nor did they receive any kind of an alert from emergency management.  Instead, they received a call from their neighbor, Cody DuVall.

Upon hearing that the fire was bearing down on their home south of Granada, they quickly drove to their farm to see if they could save it.  As they drove up the driveway, Tara took a photo from the pickup showing their home and the approaching fire.  “At that point, it was probably two miles away,” describes Tara. 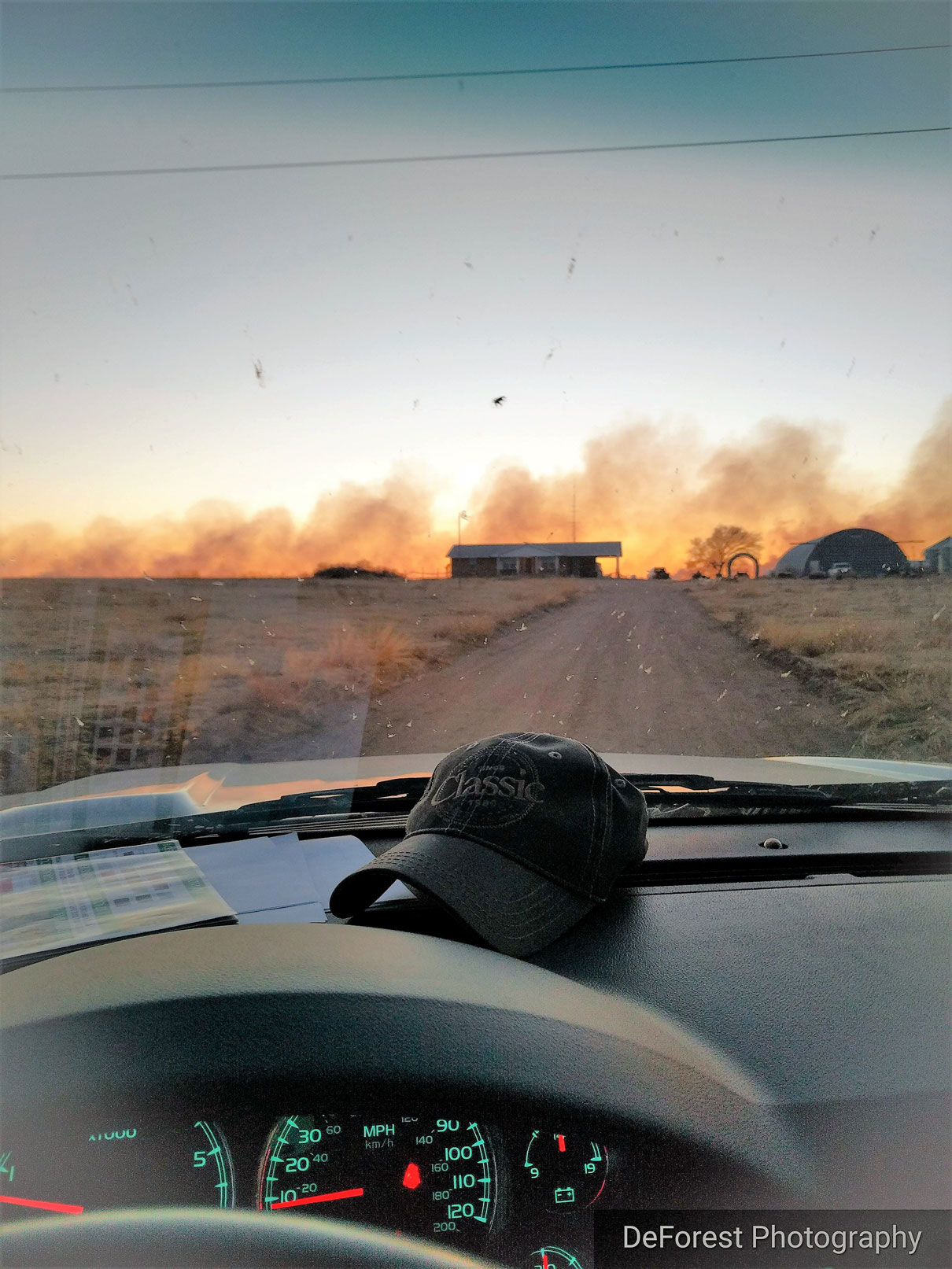 When they arrived at the house, Tara says she ran in to try to save the most important things she could think to grab.  “I ran in and grabbed our computers, our wedding pictures, Logan’s birth certificate, and our social security cards.  I packed clothes for Logan (their 1-year-old daughter) and a bag for myself.  As I was finishing up, Daniel came in and told me I had to leave.  By the time I got out of the house, it was nearly dark and the fire was a lot closer.”  Tara says she and Logan were able to leave without incident because the fire was still far enough to the west.  She drove them to her in-laws’ house where they stayed until her parents came to pick them up and drive them to her childhood home in Haswell.

Daniel stayed behind to fight the fire in an attempt to save their home.

Thankfully, he was not alone as the heroes from the various county fire departments showed up in the yard to help.  First, they got the fire put out at the back of their house.  But then, just a little after 11 pm, the wind changed directions and flared the fire back up just south of their house.  With the speed of the wind, the fire just powered right through their back yard.  “By the time it reached the back of our house,” Tara says, “at least 15 fire trucks showed up in our driveway and began circling the house and spraying water on the house and around the perimeter.  They had the fire put out within 15 minutes.” 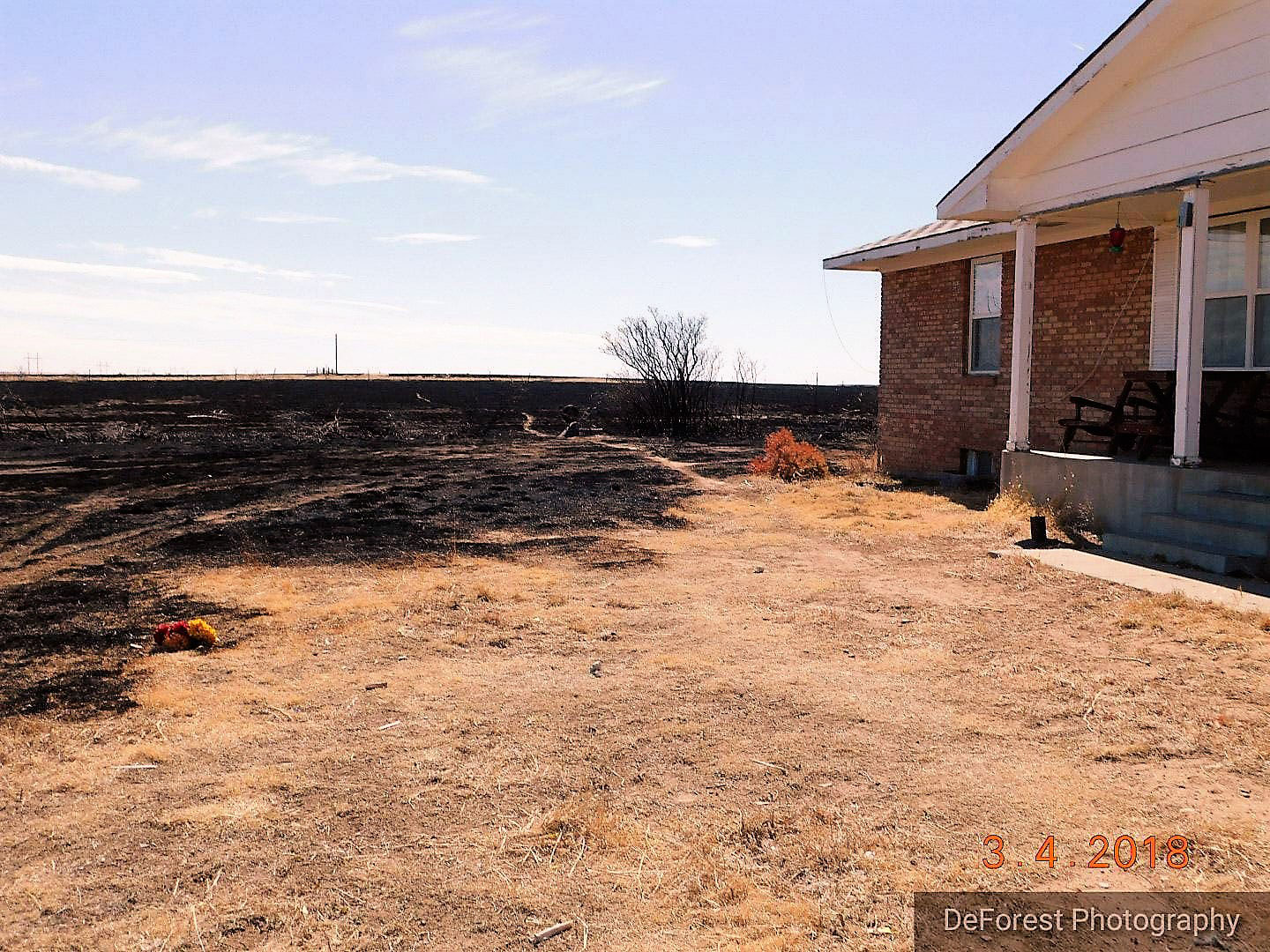 Despite the fact that their house suffered smoke damage, Tara and Daniel DeForest are very thankful for the brave firefighters who showed up, literally, in the nick of time.  “No other buildings were affected,” she says.  “And we didn’t lose any animals.”

Aside from grassland, that will recover, the only other damage was a homestead house that was consumed by the fire as it made its way toward the DeForest farm.

Tara says they are so thankful for the volunteer firemen who showed up and put themselves in harm’s way to save their home. “Thank you all,” she says. “Yes, we are very lucky and blessed. We still have a place to live. The firefighters and volunteers are saints.”

Firefighters continued to monitor the situation throughout the day on Sunday, extinguishing small fires that were still igniting within the interior of the huge burn.
(Photo credit: Tanya Kroschel, lieutenant for Hasty/McClave Volunteer Fire Department and DeForest Photography)