Written by Administrator on 03 June 2020. Posted in Obituaries 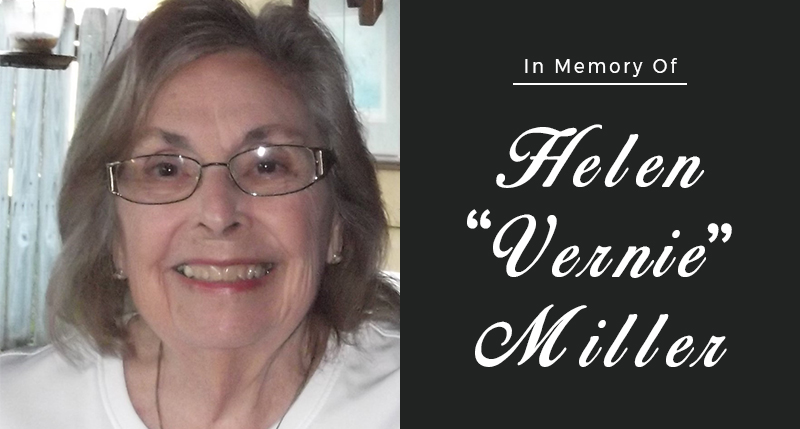 Helen LaVerne (Bass) Miller was born August 7, 1923 in Bellaire, Ohio, to Clyde Everett and Helen Isabel (Anderson) Bass. She passed away on March 29, 2020, at the age of 96, at Prairie Pines in Eads, Colorado.

Helen, lovingly known as Vernie, was the oldest child in her family. Vernie had wonderful memories of her childhood which included trips to Texas and California. Unfortunately her world turned upside down and she had to grow up real fast when her dad died. The 13-year-old Vernie had to help her mom with a younger brother and another brother who was born three weeks after her father’s burial. She was very active in school and graduated from Shadyside High School in Ohio. She immediately began working at the power company as a secretary. She loved telling everyone about the first time she was introduced to her future husband just after World II ended. His first words to her were, “How do you do, do you go steady?” After that they did go steady and were married on November 9, 1946 in Russell, Kentucky. They had 70 wonderful years together. They lived in Rocky River, Ohio until moving to Indian Lake Estates, Florida, in 1990 after George retired. They moved to Haswell in 2013 to be with their son Greg and his wife Nancy. Vernie was a homemaker who loved to play golf, tennis, bridge and to socialize with friends and family. She also kept busy with volunteer work at a hospital in Ohio and at the Methodist Church.

She is survived by her son Greg (Nancy) Miller; six grandchildren: Brandy, Steven, April, Rachael, David, Zachary, many great-grandchildren, nieces and nephews. She is preceded in death by her husband George, her brothers Gene and Don, and many other relatives and friends.

Memorial services will be held on Saturday, June 6, 2020 at 11:00 a.m. at the United Methodist Church in Haswell. The family suggests donations to Prairie Pines Assisted Living, P.O. Box 787, Eads, CO 81036 or to a charity of your choice.

Friends and family can register online condolences at www.brownfuneraldirectors.com. Arrangements have been entrusted to the care of the Brown Funeral Home in Eads.