Written by Admin on 05 August 2020. Posted in Obituaries 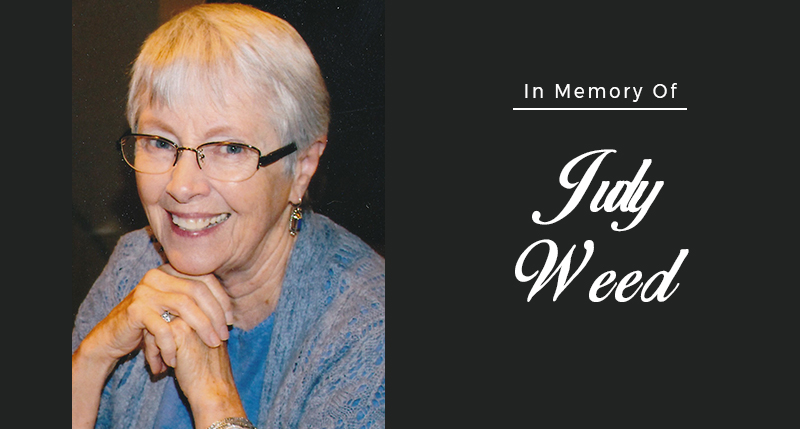 Judy was born in Fort Collins, Colorado to Arnold and Priscilla Dalrymple. Her family moved to Estes Park, Colorado in 1950, when Judy was in the 7th grade. She graduated from Estes Park High School in 1956.

Judy met Victor Weed (Louie) while attending Colorado State University in Fort Collins. They were married on February 24, 1957, and moved to Lawton, Oklahoma while Louie was in the army. In 1960 they moved to Cheyenne Wells, Colorado, where they settled permanently.

Judy loved the small-town life. She made many friends, and treasured the long, deep relationships that formed while sharing life experiences, such as attending her children’s sporting events, providing room mom snacks, playing cards, and generally walking through life with those in her community. She appreciated the beauty of living in a farming community and would marvel at the beautiful wheat fields, the green pastures, and the frolicking of baby calves. She led a full and satisfying life.

Judy and Louie enjoyed traveling over the course of their 63-year marriage. They would often make trips back to the mountains, as Judy loved her time growing up there. The frequent visits to Estes Park as her children were growing up instilled a similar love of the mountains in her children and grandchildren. Judy and Louie took a particularly memorable trip through Europe, and especially enjoyed Scotland while investigating the Dalrymple family heritage. They took several cruises to locations such as the Mediterranean, Alaska, the Panama Canal, and Mexico. Judy also traveled with her friends, which she enjoyed immensely.

Judy’s top priority was to live her faith in Jesus Christ as a way to minister and witness to each person with whom she had contact. Her heart and her life focused on growing the Kingdom.