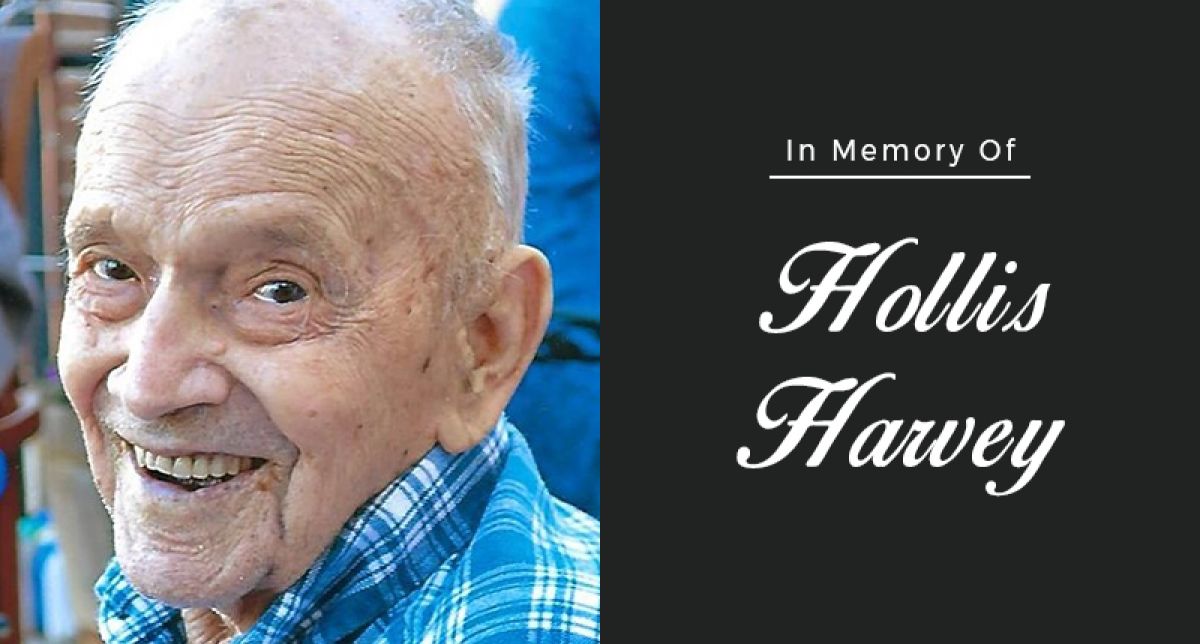 On Friday, February 12, 2021, Cecil “Harvey” Hollis loving husband, Father, and Grandad slipped peacefully from this earthly realm at the astonishing age of 103.   Harvey was born on December 7, 1917 at the family farm 17 ½ miles southeast of Lamar, Colorado to Cecil and Iola Ann (Stover) Hollis.

On May 8, 1938, Harvey married his high school sweetheart Clara Viola McDaniel.  He purchased a piece of farmland 1 ½ miles northwest of his parents’ home and began the task of “Farming” and raising cattle.  Their marriage was blessed with a son; Phillip Roger in 1939.   That same year World War II broke out.  On Harvey’s 24th birthday Pearl Harbor was bombed, and the United States went to war, however because of his occupation as a “Farmer” he was granted a deferment, to continue to farm and raise crops to help feed the nation. In April of 1943, he and Clara were again blessed with a daughter, Joyce Ann.

Harvey had many unique characteristics:  He would check on the cattle in the fields with a Triumph motorcycle, he called his “saddlehorse”.  He loved Midget Racing at the Fairgrounds in Eads. When asked if he won, he would answer “not a lot, but it sure was fun to go fast.”  His purple and white race car with the number 8 proudly displayed was one of his prized possessions.  One that he shared with his grandchildren and great grandchildren, although at much slower speed.

Harvey was a “Tinkerer”.   He had the unique ability to see, ponder in his mind and create things using ordinary odds and ends. He was always looking for something to work on.  He was a thrifty and wise man, and after 44 years of working the land, he retired.

Harvey enjoyed camping, family reunions, fishing, hiking, water fights, 4-wheeling and horseshoes. During his later years’ time spent with Clara and being with family brought him the greatest joy.

Harvey was preceded in death by his father Cecil, his mother Iola, his dear wife Clara, his older brother Leo, and his wife Frieda, his younger sister Dorothy and her husband Fred Offill. He is survived by one brother-in-law Don McDaniel of Eads CO.  He is also survived by his children: Phil (Jeannie) Hollis of Fruita CO, and Joyce Warne of Eads CO.  Harvey also has his 6 surviving grandchildren: Sandra (Michael) Mosher of Riley KS, Grant (Jessica) Hollis of Eagle CO, Charles (Bridget) Warne of Falcon CO, Staci Hollis of Eagle CO, Julie Mamo of Fruita CO, and Dawn Rae (Lewis) Martin of Fruita CO.  In addition, Harvey also has 19 great grandchildren and their respective spouses, 18 ½ great-great grandchildren and 2 great-great-great grandchildren.

A public viewing and visitation was held on Friday, February 19, 2021 at the Brown Funeral Home in Eads.  A private burial and committal was conducted at the Eads Cemetery.  Memorial contributions should be made to the Eads Senior Citizens Center.  Friends and family can register online condolences and sign the guestbook at www.brownfuneraldirectors.com.  Final arrangements were entrusted to the care of the Brown Funeral Home in Eads.