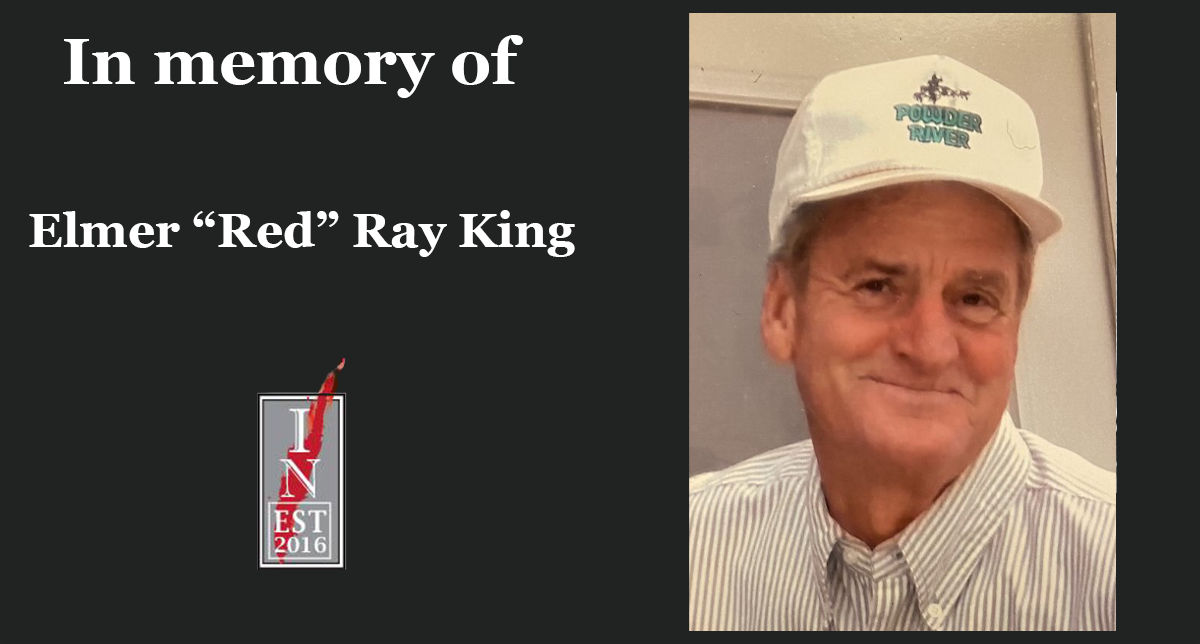 One of 8 farm-family kids, Red was born in 1944 in Eads, Colorado to Alpha Clara King and George Leslie King. At 16 years old he and some friends pooled their gas money and raced to Denver in Red’s car to see a newcomer named Johnny Cash play a small concert in a Quonset near Denver. The boys were late and Johnny himself waved them up to the front row to sit on the floor for the concert and gave them each guitar picks after. This would be the beginning of Red’s love for Johnny Cash and country music- a love that would get passed on to his kids and grandkids.

Red served his country in Vietnam after getting his GED in officer training school on his way to Saigon. He was Honorably Discharged in late June, 1967, almost exactly 54 years prior to his death. He would have been 77 in late July and lived a full and interesting life.

Red met a beautiful waitress from Kirk named Jennette Strick at the Sunset Motor Inn Restaurant in Burlington and they married and moved around for work in Joes, Kirk, Wray and even Amarillo. Then for four years, Red and Jennette ran the marina at Bonny Dam with their daughter Rodeana being born while they worked there. Red attended boat school in Miami, Florida and they built the boat shop in Burlington in 1974 on Lincoln Ave. Jason was born in 1973 and Jeremy in 75. This was the year that the family also built their homeplace 5 miles South of town. On 40 acres, he grew potatoes, pumpkins, wheat, and feed. The feed was his favorite crop and the grandkids learned how to load bales and stack them efficiently. Red instilled in his kids and his grandkids the value of a hard day’s work. He designed and fabricated equipment to help around the farm – from adding a post pusher to a Farmall tractor to a Toyota that he converted into a bale hauler – he could design and build all sorts of useful things that the family is proud of. Everyone in the county wants one. You could always find him in a white Powder River cap, Levi’s 501 button-downs and his signature snowsuit covering it all in the winter.

Red and Jennette built another shop on Rose Avenue and added trailers, cattle equipment and also added the trash business that Red bought from his Uncle Leo King and ran it for many years. He also raised alfalfa and built up a cattle herd that he kept a big ledger for – carefully recording each cow and each calf that went through the operation.

Through the years and 10 grandkids and two great grandkids later, Red made it a point to go eat at school with each of his kids and grandkids. As babies and toddlers, he made a big deal out of gently counting their fingers and toes to make sure they were all there -and did it often – which they loved. He taught them to sing a song called Catfish John and he and Jason’s kids serenaded the rest of the family from the balcony of the Mountain Goat Lodge in Salida one year when they all went skiing. His kids and grandkids were his pride and joy and they are unique products of his crazy stories and quirky, self-sufficient ways of handling anything. If you stubbed your toe or skinned your knee, he’d tell you to come over to him so he could cut it of so you wouldn’t have to worry about it. After weighing the options, everyone decided it was better to stop crying. And, after you screwed something up, you could pretty much count on him asking “Did you learn anything?”

Red leaves behind a host of friends and family that saw him always root for the underdog. He had a big soft spot for anyone in need because he grew up with so little himself. He was weatherproof, resourceful and hardworking. It wasn’t unusual to find him out in a blizzard at 2am ready to pull a calf. He’d be armed with a fried egg sandwich and a carton of unfiltered Camels and some Old Charter or Four Roses Bourbon under the seat. In his semi-retirement years, he loved working with Jason on their

ranch South of Bethune and also on Jeremy’s ranch in Syracuse. He was active in VFW and helped other aging vets get the care they needed at the VA Hospital in Denver while getting a lot of his own care there as well. He loved to pheasant hunt and would somehow con his grandkids in to laying out in a freezing cold field with him to hunt snow geese at Jeremy’s place.

His semi-retirement also gave time for horse racing. Horses had always been in his blood and his first mare was a wild and crazy Appaloosa named Fancy. More recently, his favorite racehorse that he owned was a Thoroughbred named Cozy Bar. He got claimed at the track 3 times, got him back twice and the last time he was gone for good and it broke Red and his family’s hearts. You could find him at the racetrack in the barns eating watermelon and telling stories. Red also loved to fish and was a boat-whisperer. He wanted to help everybody and didn’t want to tell them no. He’d have to go fish at remote lakes where no one knew him so that he could fish in peace without getting stuck working on everyone’s boats instead of fishing. Overall, there wasn’t much he couldn’t fix or at least try to fix. It’s fair to say that Red crowded as much living into his 77 years as he possibly could.

Red is survived by his wife Jennette (Strick) King;

Jason and his wife Robbie of Stratton and children Shayla with her husband Clay Watts and two great-grandkids – Cash and Carter; daughters Courtney and Jolene and son Ryan.

And Jeremy and his sons Truman and Coy and daughter Ramsey Rae of Syracuse, KS.

He is also survived by his sister Becky and her husband Gary of Denver, CO, brother Jim and wife Doris of Seibert, CO, sister-in-law’s Jan King of Eads, CO, LuEllen Esarey of Yoder, CO, Crickette Hollister of Sierra Vista, AZ, and many nieces and nephews.

The Funeral Mass of Rresurrection was celebrated for Red King on July 6, 2021 at the St. Catherine of Sienna Church in Burlington with Fr. Carlos Gallardo as the Celebrant.  The music for the mass was provided by Barbara Rueb and the St. Catherine’s Church Choir.  Red was carried to his place of rest by:  Coy King, Jeremy King, Truman King, Clay Watts, Jarret Reynolds, Josh Reynolds and Justin Reynolds.  Escorting Red were his honorary casketbearers and longtime friends:  Darul Fredrick, Keith Myrick, Mike Huddleston, Bruce Corman, Donald Daniel, Chad Koepke, Charles Schulty, David Hertneky and Lane Edwards.

Red’s body was laid to its place of rest in the Eads Cemetery with full military honors by the Burlington VFW Post#6491.  Memorial donations may be made to VFW Post 6491 in care of any Eastern Colorado Bank location.  Friends and family can register online condolences and sign the guestbook at www.brownfuneraldirectors.com.  Brown Funeral Home was entrusted with funeral arrangements.