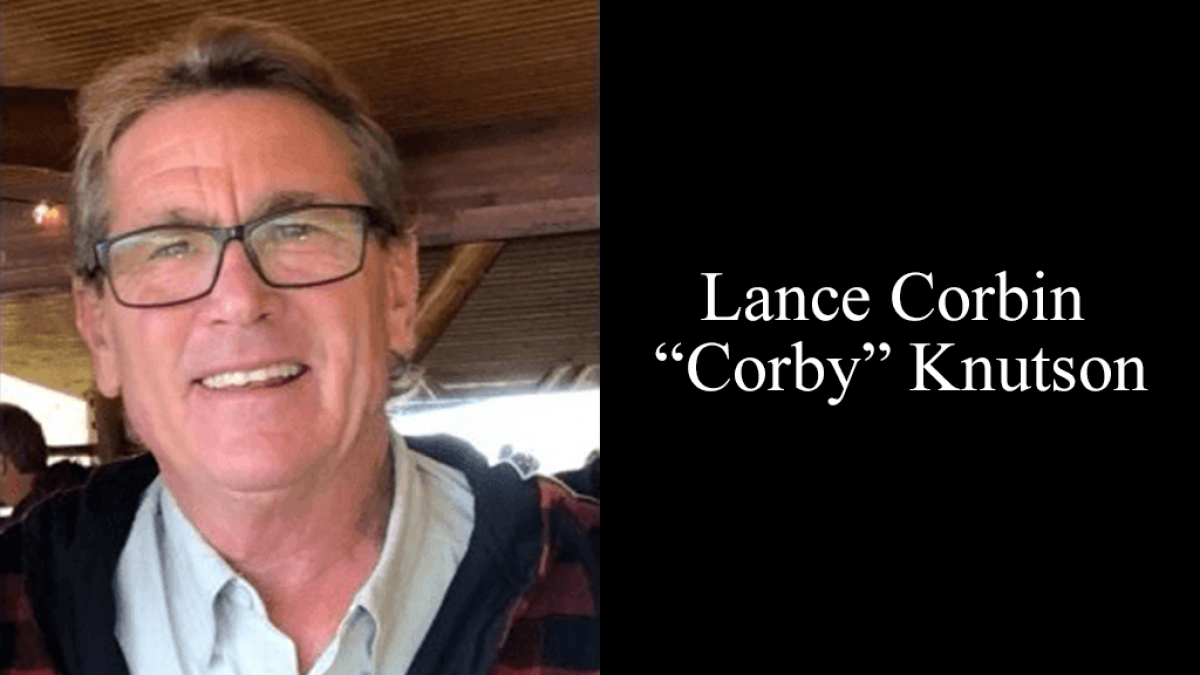 Lance Corbin “Corby” Knutson passed away October 23rd, 2021 in Aurora, Colorado, at the age of 62. He was surrounded by his wife and four children. On May 12, 2021, he suffered a stroke caused by melanoma skin cancer that had metastasized to his brain.

Corby grew up on a family farm located across the state line in North Dakota. Growing multiple grains and raising livestock, Corby learned at a young age the value of hard work and core family values. He attended school in Lemmon, South Dakota at Lemmon High School. Graduating in 1977, he excelled in football, basketball, and baseball. After graduating, Corby moved to Denver, Colorado where he attended the Denver Institute of Technology and earned his Associates Degree in Electronics Engineering. He started his first job at National Cash Register “NCR” where he worked for 42 years–until the day of his stroke. As his colleagues could attest, this was a career he was very passionate about. Like in his everyday life, he always worked to get the job done right, regardless of the difficulty or time it took to achieve completion.

Corby loved to be outdoors. A few of his favorite things to do were fishing, hunting, water skiing and camping. He was an avid Colorado sports fan and loved going to Avalanche, Rockies and Nuggets games. His favorite was football, where he has been a season ticket holder for the Denver Broncos, for over 35 years.

Corby met his wife Kathy in the fall of 1977; Kathy had moved to Denver at the same time to attend school. They met at the pool of the apartment complex they both lived in. Starting out as great friends, they clicked from the very beginning, their fluid teamwork ever apparent on the foosball table. This great friendship blossomed into love, forever growing from there. They were married in March of 1979, where their eternal love story began.

The most important thing in Corby’s life was family and being there for Kathy and his kids; to watch, support, and help them grow. He never missed any of the kids’ volleyball matches, football, basketball or baseball games, cheerleading events, or dance recitals, although he was known to have slept through some of the ballets! His time spent with his grandchildren was precious to him. He would spend countless hours outside teaching them to throw a ball, ride their bikes and cars, water grapes and trees; or, inside playing marbles and random games for hours on end. His goal was to instill the value that ‘spending time’ with your family is the most cherished gift of all.

Corby had a gentle strength about him that amplified the good qualities in everyone he touched. He was the glue and cornerstone of his family. His calming effect and reassuring presence will be sorely missed.

Corby’s infectious smile and tender blue eyes will be looking down on us forevermore.

We love you! ~Forever in our Hearts~

Memorial Contributions in the name of Corby Knutson: In lieu of flowers, the Knutson family would like to donate a memorial to St. Pius X school in Corby’s name. St. Pius X has been the home for all his kids growing up and is now the school where his grandkids attend. The family would love to take the donations they receive and put it towards something for the school. Thank you everyone for all your thoughts, prayers, and generosity. Please use the following link to contribute https://www.paypal.com/pools/c/8E9wZfGvn5