The #1 Kit Carson Lady Wildcats were very busy on the nets this week as they defeated Wiley in a non-conference game on Thursday in 3 straight sets by scores of 25-10, 25-9, and 25-8. The team had 29 kills and 15 ace serves in the contest. 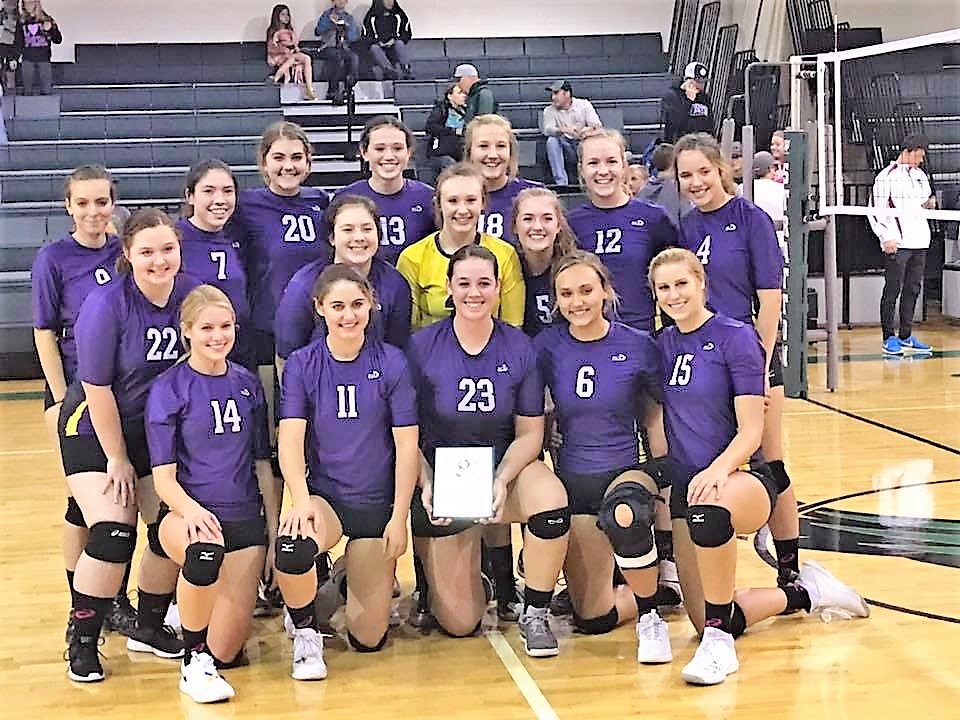 They then finished off the week by capturing the Stratton-Liberty tournament for the third year in a row by defeating Kiowa (2-0), Stratton/Liberty (2-0), and Genoa-Hugo (2-0).
The best news for Wildcat fans is that their all-state setter, junior Reyna Isenbart, returned to the line up in limited playing time as Coach Penny Isenbart brings her back into the fold slowly. According to Isenbart, “She tried back row on Thursday and played front row on Saturday.”

The Wildcats had an exceptional match against Wiley on Thursday as they were firing on all cylinders. Offensively and defensively they were led by seniors McKenzie Smith and Tess Hornung. Smith led the Cats with 7 kills and 14 digs. Hornung contributed 5 ace serves, 16 digs, and 13 assists. Cally Booker-Rady earned 6 kills as the hard-hitting sophomore got a number of attempts. Other contributors included Olivia Isenbart with 5 kills and 4 blocks; Haley Johnson contributed 5 kills, 4 aces, and 19 digs; and Josie Hornung had 4 aces, 13 digs, and 7 assists.

After a nice night of work, the Lady Cats prepared to travel to Stratton for their annual tournament where the Wildcats are the defending champions. The team worked through three shortened best 2-out-of-3 matches with Kiowa (25-7, 25-15), Stratton-Liberty (25-9, 25-13), and Genoa-Hugo (25-13, 25-10). Through all three matches the Cats never dropped a set.

First up was Kiowa where the five senior Wildcats took care of business. Smith had 9 kills and 6 digs; Tess Hornung contributed 7 kills, 5 aces, and 6 digs; Johnson put down 4 kills and picked up 6 digs; Isenbart held down the middle with 4 blocks; and Josie Hornung helped with 14 assists to her hitters.

In the semifinals the Cats faced off against the Stratton/Liberty group and quickly put them away with Reyna Isenbart finally getting in on some action with her veteran team mates. She would have 3 kills and 11 assists. Again, the seniors did it all with Tess Hornung leading in kills with 8, and also had 2 ace serves and 10 digs. Olivia Isenbart had 5 kills; Smith had 3 kills and 4 ace serves; Josie Hornung had 3 kills; and Johnson played excellent defense picking up 9 digs.

The championship game was against a fairly tough Genoa-Hugo team who has been a problem for a number of area teams in recent weeks. However, on this day, the Wildcat girls took care of the Pirates in short order. Smith and Tess Hornung led the team with 7 kills and combined for 12 digs. Olivia Isenbart had 4 kills, 2 ace serves, and 6 blocks.
Johnson and Booker-Rady held down the defense with 8 and 4 digs respectively.

Wildcat Coach Penny Isenbart was pleased with her team’s effort over the long week of volleyball, “We had some lineup changes this week and the team responded well to the change. Everyone did a great job of doing their assigned jobs and playing each point to get better.”

The Wildcats will see the Lady Pirates again as they will travel over to Lincoln County on Tuesday. They will then host a decent Flagler/Hi-Plains team on Thursday in Kit Carson. The Wildcats will finish off another long week of volleyball hosting a conference game against Granada on Friday evening beginning at 4:00 pm.