Eads Gets Their First Win at Home over Hanover, 65-37

Head Coach Trey Eder summarized the Homecoming football game in Eads on Friday night, “It feels good to finally get in the win column, and the boys were pretty excited. Homecoming was a good time to get that first one.” 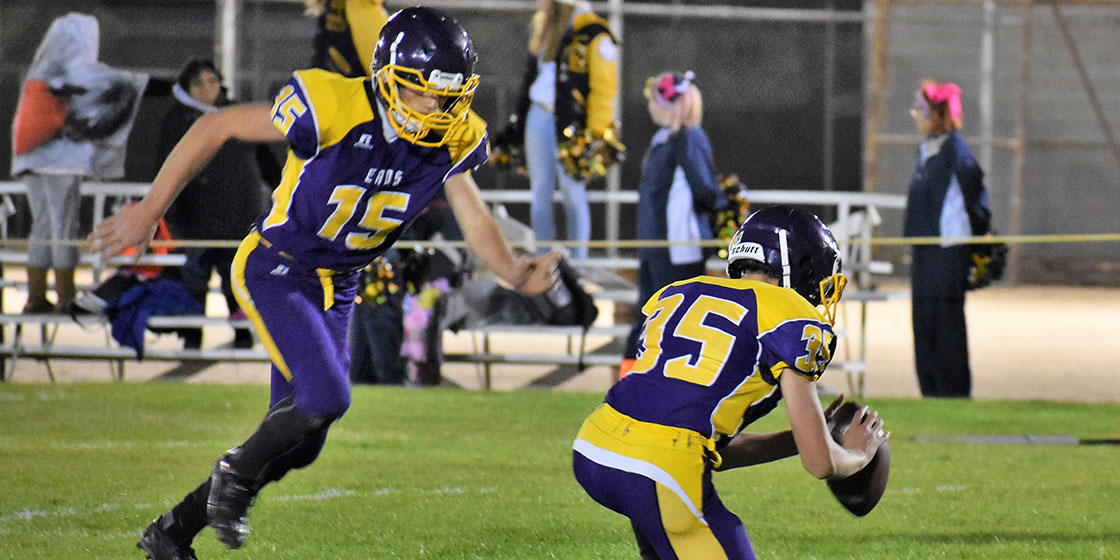 Despite grabbing the win, the Eagles still had some bad luck losing junior leader Angel Medina. Medina took the first snap from scrimmage running it for a short gain before being forced out of bounds. On the tackle he injured his knee. At press time it is unclear how serious the injury is; however, suffice it to say, it sidelined the junior for the rest of the game. Losing Medina early was a big loss for the Eagles, but they adjusted well in taking on new assignments.

Eder commented, “We once again ended the game with more injuries but were able to overcome them. We had to change some kids’ positions in the middle of the game, but they were focused and ready when their time came.”

A major key to the win against Hanover was the return of Damian Barnes who was cleared on Thursday to play. The sophomore injured his shoulder in the first game of the season against Manzanola. According to Eder, “He is a very explosive player and can make defenses adjust to him. We were able to put him in the game at key times when we needed a big play.”

After Eads lost Medina early in the contest it took them awhile to figure out what needed to be done. But when they did, they took off. The game stayed scoreless deep into the first quarter until sophomore Aiden Michael hustled after a bad snap made by the Hornets’ center on a punt attempt. Michael would recover the ball in the endzone for the first sore. His PAT kick was good, and Eads had a lead, 8-0.

Then with just .51 seconds remaining in the first period Donte Sierra picked off a Hornet pass attempt and took it to the house from 30 yards out. The PAT was good, and after one quarter of play Eads had a 16-0 lead.

Barnes entered the game at the beginning of the second period and was assigned to receive a punt attempt. He would find another gear and blow by the Hornet defense on his way to a 45-yard TD run. The kick attempt failed, but Eads found themselves in control, 22-0.

At the 8:15 mark of the second period, Zach Fowler hustled and recovered a bad Hanover snap. Fowler recovered the ball at the 2-yard line. Quarterback Dillon Hernandez then found Barnes in the endzone for the TD. Again, Michael’s kick was good, and Eads led 30-0.

Barnes ran one more to the house at the 3:17 mark of the second quarter scampering 40 yards on the play. The kick was no good, but Eads was in full control, 36-0.
Late in the second period, the Eads boys, who are very young and not very big, began to struggle a little with fatigue. This opened the door to Hanover’s senior running back Andrew Morris who scored twice on a 70-yard run and a 6-yard run with just .38 seconds remaining in the first half.

The intermission scoreboard showed Eads leading 36-13 as the Homecoming royalty came out to the field. 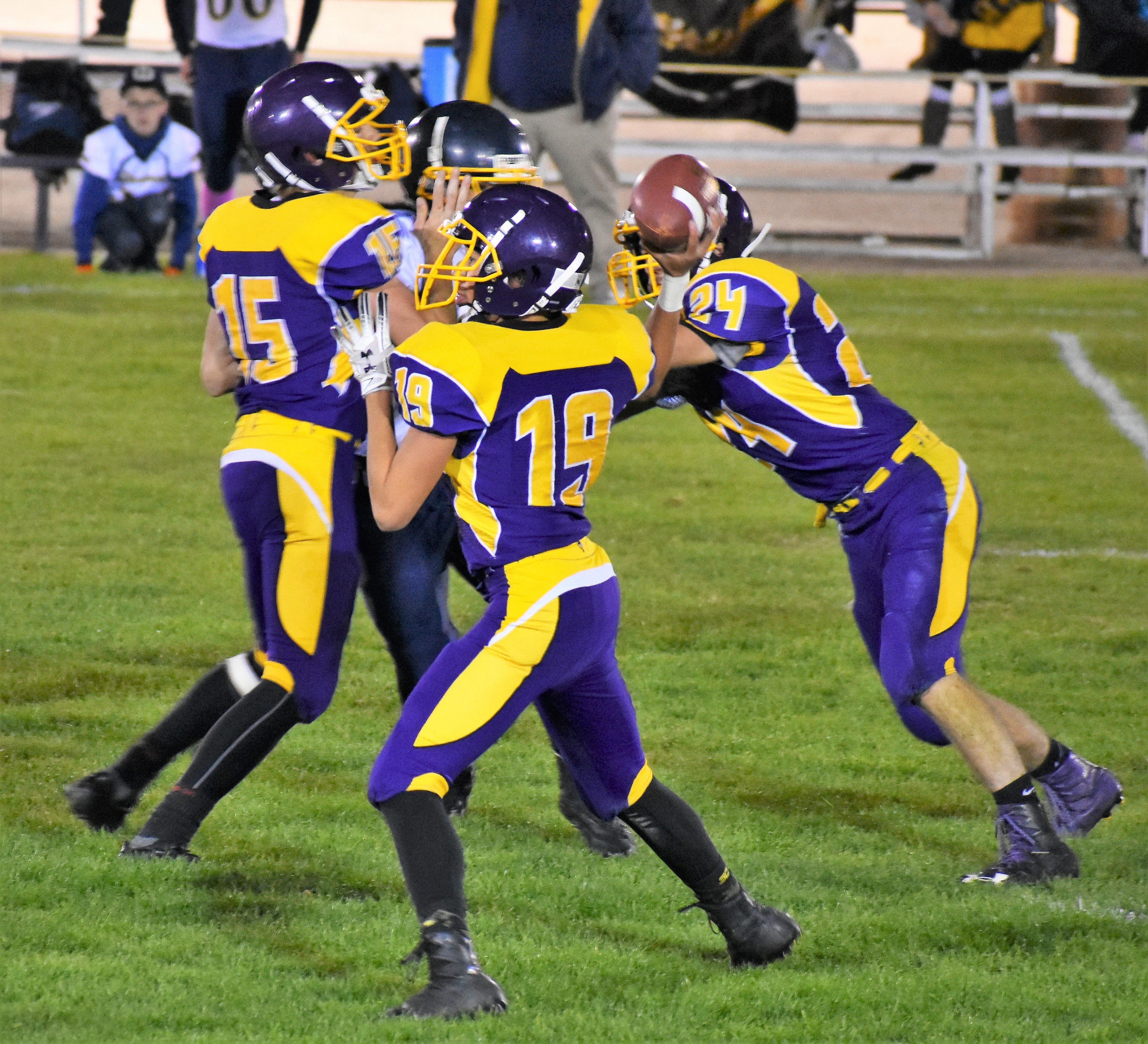 At halftime, Eder was able to make some adjustments, “We had used Barnes enough by halftime that they were staring to key in on him, so that gave us an opportunity to switch up where the attack would come from.”

Morris came out fighting in the third and right away found team mate David Brown on a 40-yard touchdown pass play making the score 36-20. But then Eads came alive as they may have realized they were in control, but it took effort to hold on to that. Michael barreled right up the heart of the Hanover defense at the 8:03 mark scoring from 45 yards out. His kick was good, and Eads got some breathing room, 44-20.

Hatch Nelson then recovered a fumble at the 6:45 mark of the third period which resulted in Micheal running straight up the gut of the defense again for the TD from 28 yards away. His kick again went through the uprights and it extended the score to 52-20

Unfortunately, Morris wasn’t done just yet and used his superior size to plow over the young Eagles on his way to a 57-yard touchdown leaving the score at 52-27 with 5:56 left in the third.

The Eagles started to look a bit intimidated as Morris struck at the 4:17 mark on a phenomenal 50-yard kick off return after Eads gave up a safety. Now the Hornets were knocking on the door again, 52-35, and it looked like the Eagles might break as they also lost their QB, Hernandez, to a shoulder injury during the confusion.

But at the 4:09 mark of the third, Barnes electrified the crowd on a 37-yard TD run that was called off because of a holding infraction. But, his run excited his teammates and gave them the confidence they needed to finish the game. With a freshman at the helm as QB, Cade McDowell stepped up into the pocket a couple of downs later and found Barnes and then Fowler in a first down pass play. The next play from scrimmage had McDowell throwing again to Barnes who made an athletic catch and ran the ball down to the 2-yard line. Michael’s patented up-the-gut run was next on the menu and it worked for the score with 1:39 left in the third.

The fourth quarter was, admittedly, a little shaky for the Eads crew who were out of position and just hoping to hold on. However, they did enough to hold off the attack from Hanover. And then with 4:06 left to go in the game, Barnes left no doubt as to who would win as he intercepted the ball and took it 50 yards the other direction for the score.

Eads then controlled things to the end and celebrated their first win, at Homecoming no less, 65-37.

The Eagles will go back to work and hope to get two in a row as on Friday they host conference rival Cheraw at 7:00 pm. The Wolverines were defeated by Cheyenne Wells, 52-24.