Written by Betsy Barnett on 24 April 2019. Posted in Sports

The Eads baseball team went 1 and 2 over this past week of play, but their one win was a big one as they managed to grab an upset win over undefeated Otis, 7-4, in the nightcap of a key conference double header.

Eads started the week losing to Fowler, 16-7, in their final home game of the regular season. They then traveled up to Otis to play that double-header with the top team in a large District 3 conference. They would lose the front end of the double-header, 13-3, but came back in the nightcap for the big win.

Eads is now 7-8 on the overall season and 4-6 in the league sitting in fifth place with just one week of the regular season remaining. The Eagles have finished conference play so will need to sit and wait to see if they can get a bid into the playoffs. As it currently stands, Otis, Granada, and Springfield all only have one loss in the conference and only two, first and second place, can advance into the post season from each league. However, there is hope for Eads who is sitting in a very tough conference. The rest of the qualifiers to the post-season comes from the RPI rankings where Eads is currently sitting in 10th place thanks to a very strong schedule and some good showing against highly ranked teams. Springfield is in 2nd in the RPI rankings while Otis and Granada sit in the three and four-spot respectively.

In their final home game of the season the Eagles fell behind early and couldn’t come back in the 16-7 loss to Fowler last Tuesday. Despite the loss, Eads collected seven hits in the high-scoring affair. However, they would give up 16 hits to the Grizzlies. Cordell Farmer and TJ Conaway had multiple hits for Eads. Farmer went 3-for-3 at the plate.
Eads notched four runs in the fifth inning putting pressure on the Grizzly pitcher. The scoring broke open when Zack Fowler put a ball in play to get on base. Cade McDowell then came to the plate and smashed a double.

Fowler had scored 10 runs in the third inning after Eagle starting pitcher Brandon Lening was pulled after two innings. The sophomore gave up four runs on eight hits but did not walk a batter. The rest of the battery included four more hurlers who came in relief including Ross Brown, Conaway, McDowell and Hatch Nelson.

The Eagles knew they had their work cut out for them traveling to Otis on Friday as the Bulldogs were undefeated and dominating the eight-team District 3 standings.

The first game against Otis slipped away quickly for Eads as Otis scored one run on three hits in the first inning. The Bulldogs added four more runs in the second, as well.
Lening started for Eads on the bump and allowed eight hits and 11 runs over three and a third innings. The sophomore would strike out six batters. McDowell came onto the mound in relief throwing one and one-third innings before Otis shut the door on the 10-run rule.

Conaway led Eads in the first game against Otis with two hits in two at bats.

With Conaway leading off on the mound in game 2 for Eads, the Eagles struck the Bulldogs early surprising them with a run in the first inning off a Conaway RBI single. Conaway went five innings, allowing four runs on seven hits and striking out five. The senior’s aggressive attack from the mound and at the plate was key in the Eads win. 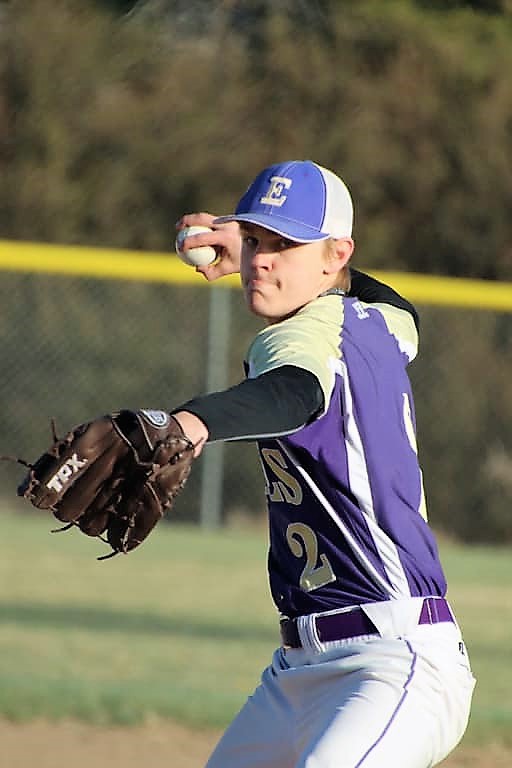 The Eagles then put four runs on the board in the third inning. The offensive firepower for the Eagles was led by Conaway, McDowell, and Joe Haase, all driving in runs in that inning.

The key to the win for Eads was that for the first time in the season they did not commit a single error. This was a huge lesson for the young players who have been plagued by errors all season.

Eads and Otis each totaled seven hits, however, the Eagles spread them out in just the right order to grab the win. McDowell and Conaway each managed two hits apiece in the big conference win.

Eads has completed conference play and is down to one last game this week to finish off the regular season. They travel to face off against the County Line Rivals on Thursday in a non-conference match up. The Rivals are a 2A team that consists of players from Wiley and McClave. Game time is 3:00 pm.

Photo 1: Freshman Ross Brown got some effective time on the mound for Eads over the week. - Wilson Photography
Photo 2: Senior TJ Conaway from Kit Carson who plays on the Eads Baseball team threw a nice game against Otis in what proved to be the Bulldog's first loss of the season. - Credit Jamie Conaway