Eads Minors Baseball Finish Up the Season in League Tournament

Written by Betsy Barnett on 19 June 2019. Posted in Sports

It was a building season for the Eads Minors team consisting of players from 7 to 9 years of age. The Eads group is a large team with 16 rostered players that is full of energetic seven-year-olds, for the most part, who have just entered organized ball from the tee ball ranks last year. There are two 9-year-olds on the team and the rest of the team consists of first year players. Teaching the game of baseball to such raw little athletes has been the job of Kyle Barnett, Brian Bohlander, and Kevin Davis. 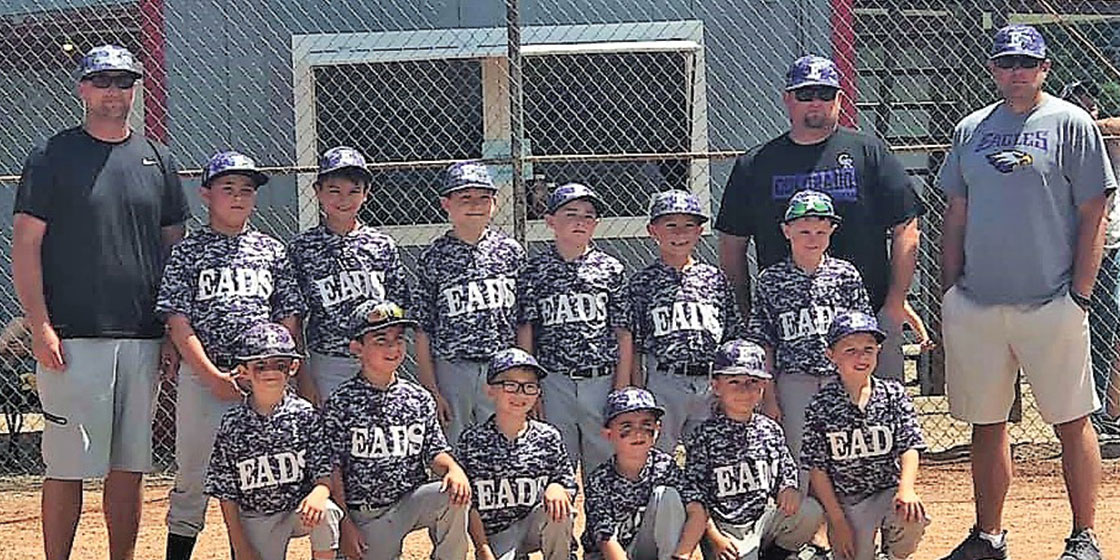 The Eads youngsters have had their ups and downs over the season but managed to beat Holly half of the time. The other team in the three-team league was Cheyenne Wells whose 9-year-olds dominated the league going undefeated.

The Southern Plains Minors tournament was held in Holly over the weekend with Cheyenne Wells winning the whole thing leaving Holly and Eads to battle it out for second place. Eads would eventually lose to Holly, 8-7, after a lot of exciting ball that saw the game suspended in the bottom of the sixth and final inning on Friday night when a deluge of rain hit the Holly area. The teams were forced to return early the next morning to finish the half inning.

Eads was the home team and trailed 8-6 as the final at-bat began. The little guys challenged but could not finish losing 8-7. They would then play Cheyenne Wells in the final game of the round robin tournament and lost 11-1 to the champions.

In the Holly game it took Eads a little bit to get going defensively as Holly scored four runs in the top of the first inning. The tournament is pitching machine only, so the Holly group did a good job jumping on the speed of the machine right away. Noel Lopez started things off with a single. He was followed by singles from Coy King, Saenz Cruz, and Blayke Butler. With two outs Josiah Stum hit a hard double to center field scoring two of the four runs.

Eads scored once in the bottom of the first inning as Mason Sierra nailed a single and would eventually score on a Landon Zimmerman RBI single.

Eads managed the bulk of their runs and challenged Holly in the bottom of the third. Will Barnett started off the inning with a hard double that turned into a run as Holly committed two throwing errors trying to get Barnett out. Kai Brown then came up and hit a strong single. Brown was moved by Maddox Back’s double. Sierra would hit in Brown on the fielder’s choice. Zimmerman, again, came through with a double scoring Back. Eads would get their last run in the bottom of the third when Zimmerman scored on a Justin Johnson RBI single.

Then the flood deluge began, and the last inning was suspended until the next day. In Eads’ final at bat on Saturday morning Johnson started them out with a strong single. Madyx Hough brought Johnson around hitting a double and Wyatt Murdock moved Hough to third. Unfortunately, Eads could not get any closer than two on board at second and third and still trailed by a run.

Going into the next game with Cheyenne Wells there was almost a completely new team out on the field for Eads as there are a number of players who need to see playing time.

The Eads crew did not hit well against Cheyenne Wells as for three complete innings they went three-up-three-down. Finally, in the fourth inning Brown hit a single and would eventually come around and score off a Tucker Fry single. That would be all the scoring for Eads in the game. Johnson and Hough each got a hit but were left hanging.

Cheyenne Wells is comprised mostly of 9-year-olds and their maturity showed against Eads as they pounded away at the ball getting multiple hard hits in the process. Caden Muth and Marcus Garcia would score in the first inning. The CW group would go down in three straight strikeouts in the second inning but would score the maximum allowed seven runs in the third as Muth, Kase Shalberg, Garcia, Jayven Danssel, Ayson Cox, Briggs Bogenhagen, and Creed Brown all had hits and eventually scored. Garcia and Danssel added a couple of strong hits for back-to-back homeruns in the fifth inning.