Holly Picks Up Win Over Akron

Written by John Contreras on 10 September 2019. Posted in Sports

In just Week 2 of the 2019 football season, things are already starting to heat up.

IN CLASS 6-MAN ACTION, the young Granada Bobcats claimed their second victory of the season with a 53-38 road win at Idalia last Friday. 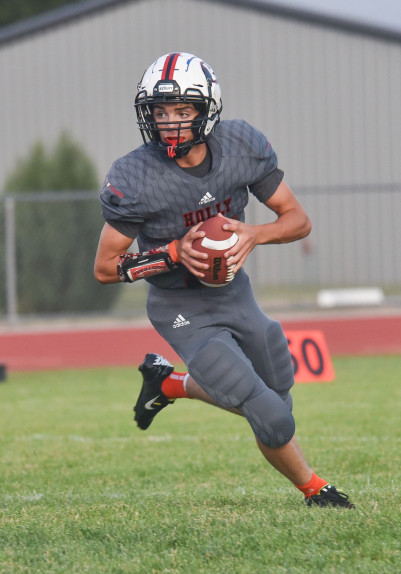 Idalia held an 18-6 lead after the first quarter before the Bobcats rallied for a 33-18 advantage at halftime.

Granada extended its lead to 47-26 after three quarters of play.

The Bobcats added another score in the fourth quarter while Idalia scored twice to bring the final score to 53-38.

Granada sophomore quarterback Dominic Coleman rushed for 106 yards on 10 carries and scored on touchdown runs of 36, 25, and 4 yards.

Hainer also rushed for 188 yards on 22 carries and scored two rushing touchdowns on runs of 2-yards and 4-yards.

This week, the Bobcats (2-0) will host the 10th ranked Eads Eagles (2-0) in a showdown of unbeatens in a Southeast League opener for both clubs on Friday, Sept. 13.

The Eads’ ground attack rushed for 11 touchdowns in a 78-48 victory over Manzanola last week.

Damien Barnes, a junior, rushed for 353 yards and seven touchdowns on 25 carries.

Senior Angel Medina also had a good game for the Eagles has he carried the ball nine times for 131 yards and four touchdowns.

Eads also rushed for eight touchdowns in their 61-37 season-opening win against Genoa-Hugo.

Barnes had six touchdowns in that game to make him the current leader in the state with 13 rushing touchdowns.

He also leads the state in rushing with 633 yards on 38 carries.

Granada played Manzanola in its season opener two weeks ago and won that contest 24-18.

IN CLASS A 8-MAN, the Holly Wildcats bounced back from their 40-32 season opening loss to Dayspring Christian to post a nice 28-14 victory over the visiting Akron Rams last Friday, Sept. 6.

The Wildcats’ defense held the Rams scoreless through the first three quarters.

Holly, meanwhile, held a 16-0 lead at halftime and a 22-0 lead after the third quarter.

The Wiley Panthers fell to 0-1 with a 34-0 loss to the Swink Lions in their season opener last Friday.

Offensively, Trent Krentz rushed for 84 yards on 19 carries for the Panthers.

Wiley travels to Haxtun to face the Bulldogs at 7 p.m. on Friday, Sept. 13.

Haxtun is coming off 34-0 loss to Holyoke last week.

In other area 8-man action, the McClave Cardinals dropped to 0-2 following a 52-0 road loss to Pikes Peak Christian last week.

In two games, the Cardinals have been outscored 96-6.

McClave has a road game against the Elbert Bulldogs (1-1) this Friday. The Bulldogs are coming off a 52-12 victory over the Springfield Longhorns.

Photo 1: Holly quarterback Dakota Eaton scrambles in 8-man action against Dayspring Christian in the season opener for both teams on Friday, Aug. 30 in Holly. Trailing 34-8 at halftime, the Wildcats rallied in the second half to score on four rushing touchdowns by the Wildcats quarterback but fell short to the Eagles, 40-32. - Photo Credit John Contreras