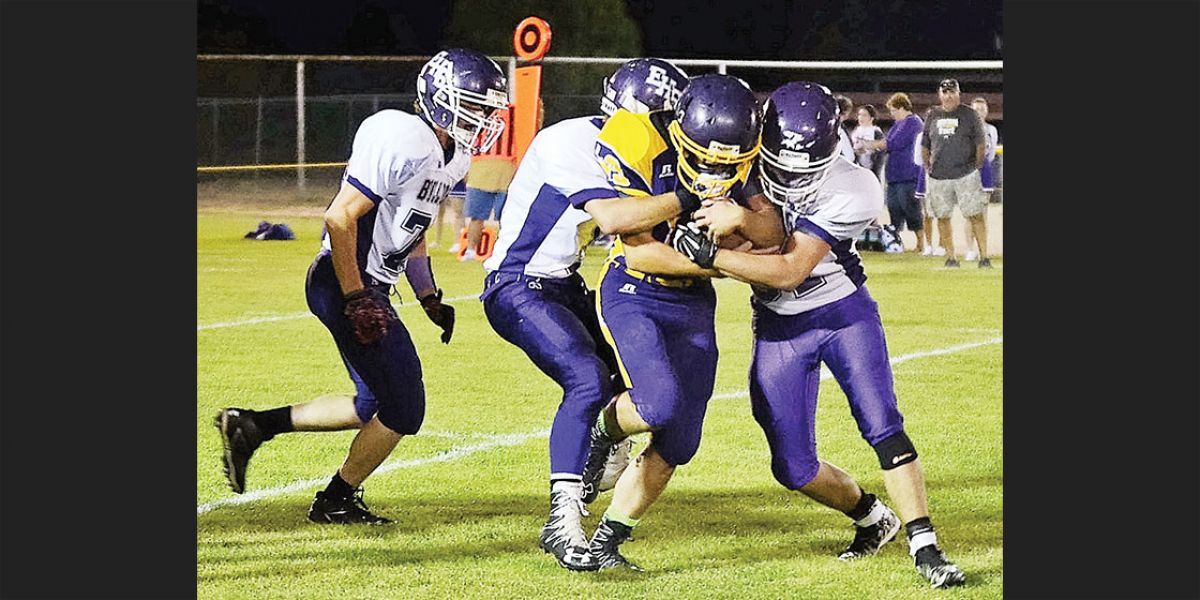 The Eads Eagles (4-1) continue to slowly catch momentum as the #10 ranked team in the state moved up two lines to #8 this week after having a solid performance against Elbert (2-3) in Eads on Friday night among Homecoming festivities.  Their momentum needs to continue to ramp up as they are entering into the challenging part of the schedule beginning with Walsh away next week.  Coach Trey Eder’s group used a number of weapons to defeat a decent Bulldog team on Friday night, including the limited time of Fredrick Turner who has been sidelined for most of the early season.  Turner would come into the lineup on a couple of key plays in the first period where both times the Bulldogs were surprised by his quickness and speed.  He would score twice right away.  On his first visit back on the field Turner surprised Elbert with a 15-yard first-down run that set up the ensuing 9-yard touchdown run on the next play from scrimmage at the 4:15 mark of the first period.  After those two runs, the Bulldogs would key in on Turner each time he came into the game.  However, the all-state backer would power through with :58 seconds left in the first to again score, this time on a 34-yard touchdown run.  Add in one of two good extra kicks from Cameron Crow and Eads had a good start leading 14-0 after the first quarter.  After that first quarter, Turner saw limited action for the rest of the game as Coach Trey Eder wants to bring him back into the lineup slowly.

The Bulldogs turned out to have some good athletes, particularly in senior Joel Smith, who did it all for the visitors as quarterback, defensive linebacker, and kicker.  Despite the fact that Turner never saw a down on the defensive side of the ball says quite a bit about the strong defense Eads put on the field against Elbert.  In fact, the Eads group held the Bulldogs to just one first down in the entire game, including at the end of the game when the Eads youngsters were on the field.

During halftime some of the football players were part of the Homecoming royalty presentation so Coach Eder didn’t get much time to discuss any changes.  However, Eads didn’t seem to miss a beat as they would score two more times early in the final period.  At the 1:06 mark of the third, after both teams had punted back and forth, quarterback Caden Parker found Chance Fowler on a long 42-yard pass play that landed Fowler on the 9-yard line.  Eads would eventually punch it in at the start of the fourth period (9:12) on a Parker-to-Fowler touchdown pass that measured out to 33 yards.  The final score came from the nose-guard/kicker Crow when Parker found him wide open in the end zone for a 10-yard touchdown.

Eads accumulated 378 total yards in the game and was led by Parker from the air throwing for 97 yards with his favorite receiver being Fowler who received for 76 of those yards.  Turner, in just 8 carries overall, had 82 yards.  Randel led all rushing stats with 109 yards in 12 carries.  On defense, Rhett Uhland had 8 tackles and 1 sack while Randel had 7 take downs.  Freshman Angel Medina got a late sack against the Elbert varsity in a nice defensive hustle.  Trenton Rittgers got one sack, as well, and Crow was 4-for-7 in extra kick attempts.

Eads (4-1) now faces the most challenging part of their schedule as they will first travel to Walsh to take on a decent Eagles team on Friday night.  They then must finish with Kit Carson and Cheyenne Wells with all three teams in the hunt for the conference championship.