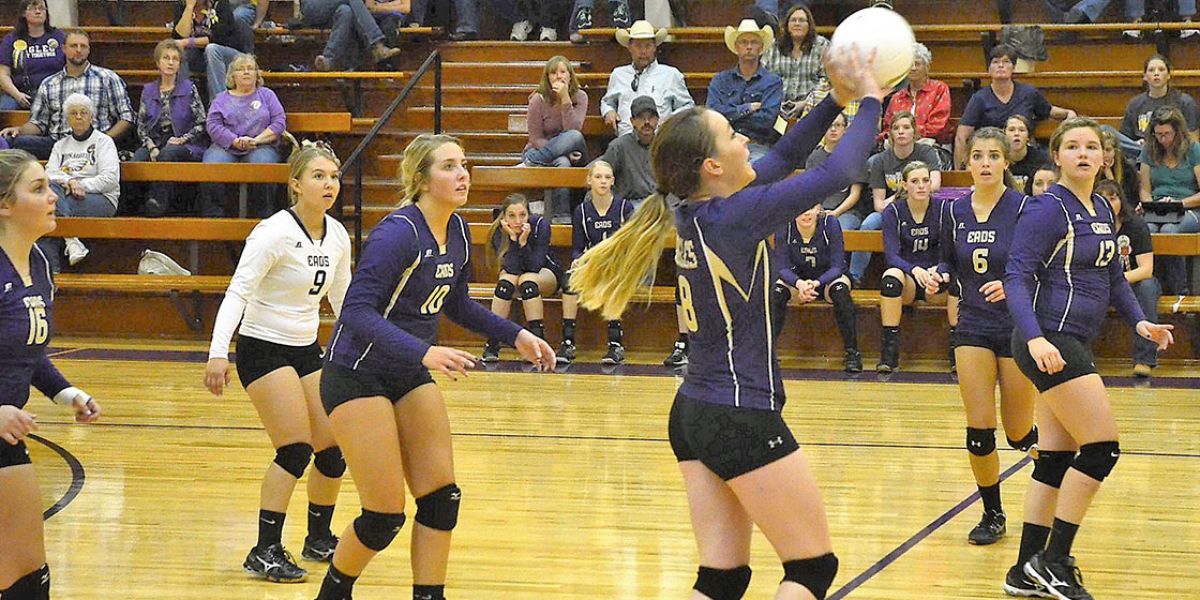 It was Homecoming in Eads and the Eads Volleyball team looked up to the challenge of a busy week and a strong performance at the same time against the visitors from Elbert.  The Lady Bulldogs came into the game sporting a winning record at 7-6 but Eads would take the match, 3-1 (19-25, 25-18, 25-23, 25-12).  Eads stayed hot on Saturday in Ordway at the Crowley County gym as they battled through their closest match of the season finally winning a barnburner, 3-2 (14-25, 25-23, 25-16, 20-25, 16-14).  Eads is 50% on the season at 4-4 going into next week’s schedule.
In game one against Elbert the Lady Eagles started slow and tentative forcing hit and service errors that put them in a hole, 6-11, quickly before head coach Janelle Randel could call a time out.  Then she had to call another one right away; this one not so amicable.   The second one did the trick and Eads started attacking Elbert and moving defensively picking up a number of digs and sending attack after attack back at the Bulldogs.  The Bulldogs began to flounder causing a time out on their side with Eads just down, 16-18.  Coming back into the game Rouse, who was looking like she wanted to compete, put down two big kills getting Eads within a point, 19-20.  However, that would be it as the Lady Eagles let up for just a moment and three passing errors later they had lost Game 1, 19-25.  Game 2 was Mariah Smith’s as she controlled the game right away and got Eads the lead, 16-10, behind three blocks and two kills.  For the rest of the game Smith’s presence bothered the Bulldogs as they didn’t attack as hard and started trying to control-hit over or around her.  This allowed Eads’ defense to pick up the weaker hits.  As Smith transferred to the back row in the final rotations, sophomore middle Brooklynn Jones held down the fort in the front getting a big block and a 23-15 lead.  Outside hitter Emily Gyurman put a kill down making the score 24-15, but Eads then forced three straight service and passing errors.  Elbert finally handed Game 2 to the Eagles with an unforced passing error into the net.

With the scoreboard knotted at one win apiece, the Lady Eagles really needed to get Game 3 to keep their newly found momentum.  And kept it they did forcing the first Bulldog timeout behind 2 kills by Rouse, a third by Gyurman, three service points by Mindi Uhland leading 14-10.  But at the timeout Eads let down completely and let the Bulldogs have their way with them and all of a sudden found themselves trailing, 14-16.  Hadlie Rittgers tied it back up with a finesse shot into a hole, 16-16.  Eads was behind as much as 15-20 but the Bulldogs started feeling the pressure and missed some key serves.  Eads recognized the opportunity and started attacking again until a Rouse kill tied the game, 20-20.  Rouse and Gyurman combined forces to score the next four points for Eads with Rouse on the service line and Gyurman getting down two kills.  It would take a trick shot from Rouse who looked like she was making an emergency set but tipped into a hole instead to win the game, 25-23.  When Game 4 rolls around a team with the advantage wants to keep the advantage in order to put their opponent away.  Eads would do just that as the steam went out of Elbert and Rouse pounded away at them with Smith bothering their top hitters in the front row.  The Lady Eagles put together a great game on the service line and on the attack winning the last game in dominating fashion, 25-12.

Eads then traveled to take on the non-conference Crowley County Chargers on Saturday.  It was a tough battle from the get go that saw some exciting play and some missed opportunities.  The most excitement came in the final game when it was winner take all to 15 points.  The game’s score moved back and forth until Eads gained the advantage to win in extra points, 16-14.
As we go to press, Eads will take on a good Wiley group on Tuesday and then will be on the road on Friday at Walsh.  They are entering the midway mark of the season.