Written by Betsy Barnett on 22 October 2019. Posted in Sports

According to Eads head coach Trey Eder, “It was a game that we took control of from the opening kickoff. We scored on the first possession and proceeded to recover 4 onside kicks in a row and scored quickly off of all four. With just two minutes into the game we had a 34-0 lead and never looked back after a 42-8 first quarter and a 62-8 halftime lead.” 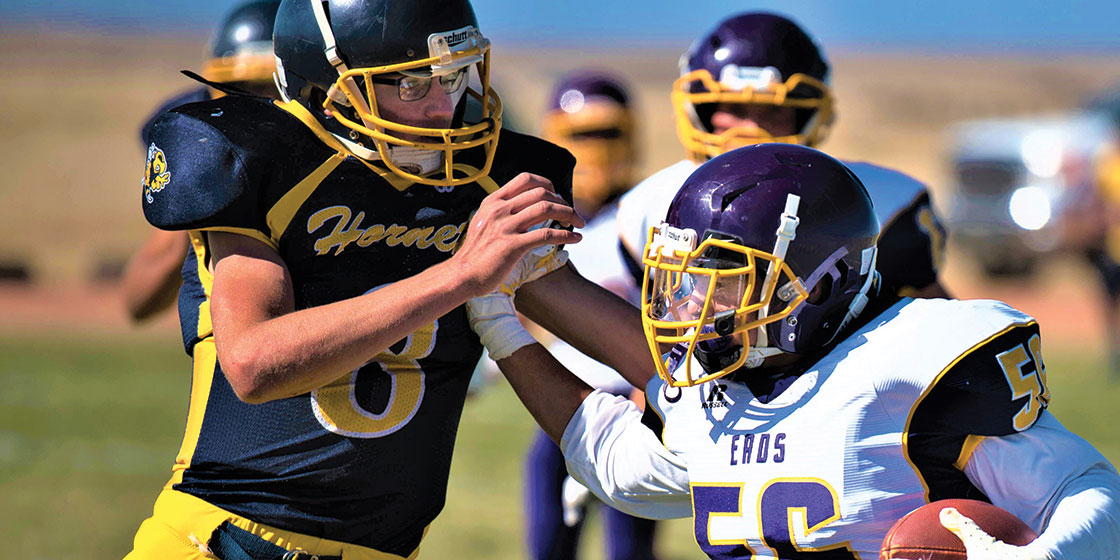 “It was good to see us start fast and continue to keep that intensity throughout the first half.”

On Eads’ first possession quarterback Cade McDowell hooked up with Damien Barnes in a 55-yard touchdown pass play. The PAT pass from Ty Wilson to Chase Stolzenberger was no good leaving the score at 6-0 with just under 2 minutes clicked off the first quarter clock.

Then, in a series of 4 recovered onside kicks, Eads ran up a number of touchdowns. In all, the Eagles recovered 6 Hanover fumbles including 3 by Barnes, one by Donte Sierra, one by McDowell, and one by Brenden Reifschneider.

Senior full back Angel Medina then got into the action scoring quickly after two more fumble recoveries. He would score from 12 yards out at the 8:23 mark and then from five yards out at the 8:04 mark of the first. Wilson’s PAT kicks were good on both Medina touchdowns leaving the score at 28-0.

Eads then elected to go to the skies. First, Barnes found McDowell in the endzone from 45 yards out at the 7:53 mark. Eads now had a 34-0 lead.

Eder started bringing in his young guys mixing them with the starters during the transition. With 3:33 left in the first quarter, the Hanover fullback punched the ball in from one yard out. After Hanover got on the scoreboard, Eads still led 34-6.

The Eagles went to the air again with 2:33 left in the first quarter as McDowell found Barnes in a 38-yard TD strike. The kick by Wilson was good leaving the score at the end of the initial quarter at 42-8.

Eder was happy with the way Eads performed in their passing game, “We were able to get the passing game on track, as well, and we need to see that as we go into the last week and the playoffs.”

Barnes continued to be a force Hanover had no answer to as right away in the second period at the 8:37 mark the junior ran the ball back in an electrifying 43-yard TD run.

At the 6:57 mark McDowell again went to the air and this time Hatch Nelson received an impressive 30-yard strike leaving the score at 56-8.

Barnes, again, caused havoc for the Hanover boys when he picked up a fumble after the Hanover player had run the ball to the Eads 26-yard line and carried it to the endzone. With 4:00 left in the first half Eads led 62-8.

Barnes has some impressive stats thus far this season as the junior leads the 6-man division in touchdowns and rushing yards. He also leads the entire state in all divisions in touchdowns scored. According to Eder, “Damien is a special talent that teams must account for and stop and with our passing game being able to be productive it will give teams another aspect of our game to contend with.” 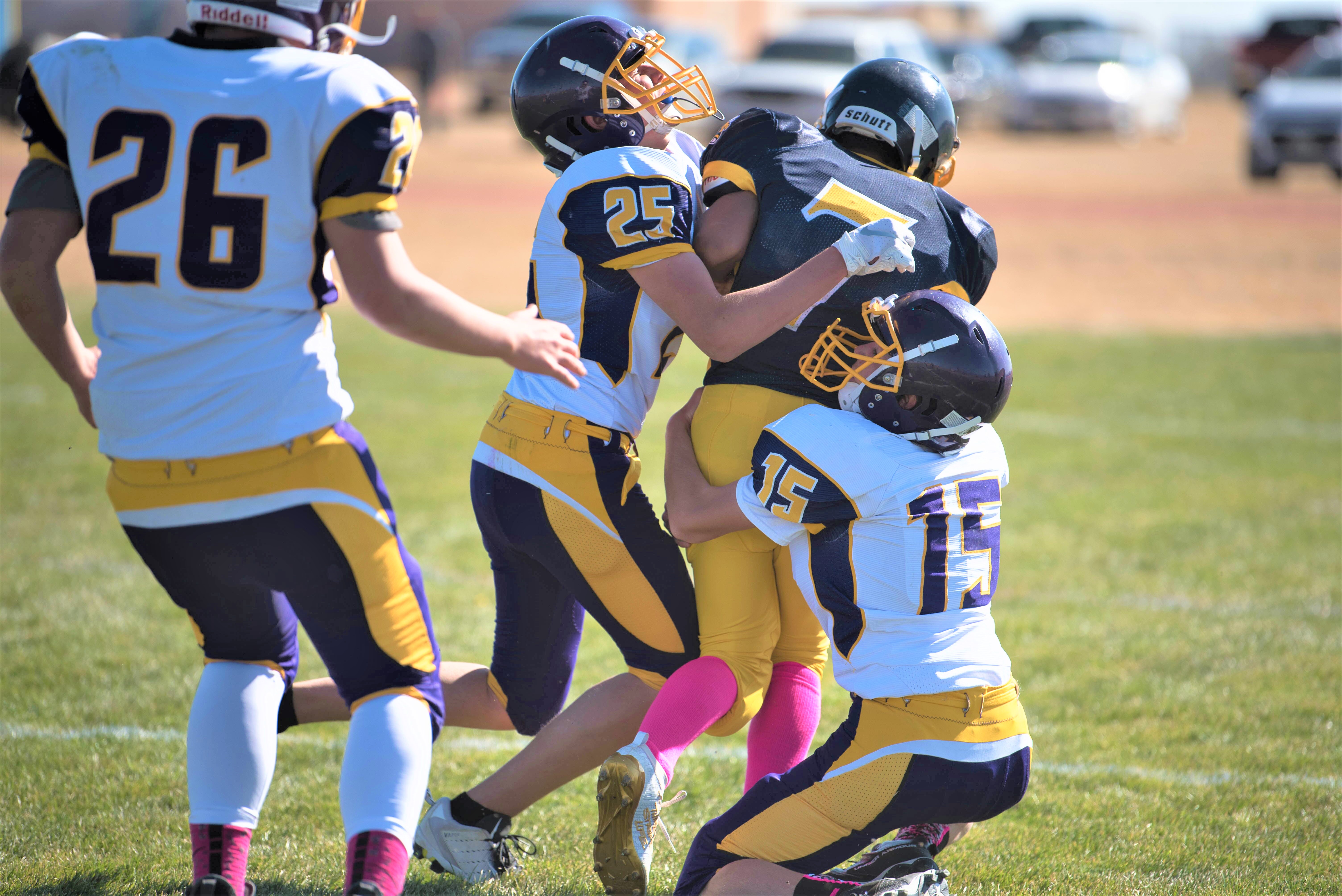 Eads’ big lead allowed Eder to play his younger guys throughout the entire second half. Although it took them a little while to figure things out allowing Hanover to score twice in the third period, once they got going the JV group did some really good things.

Going into the fourth quarter, freshman AJ Vasquez got the call to throw a pass to the endzone. This was the first call of his preps career, and he immediately threw a beauty hitting Will Crow for a 46-yard TD strike with 8:53 left in the game.

“It was good to see the players who have not received much playing time to be able to get in and play well. We were able to get a score from them on a Vasquez pass to Will Crow. Vasquez had not thrown a pass before and took the ball and hit Crow with a great pass for a touchdown. We wish we could have all seen AJ’s face when the play call went into the huddle.”

Hanover scored a couple of more times throughout the quarter, but overall the defensive pressure put on by the Eads bench was encouraging. Eder agreed, “Some more highlights included Caleb Miller stepping up on defense making some great physical tackles. Also, Crow had some strong kick-offs.”

Eads passed for 238 yards in the game. McDowell completed 4-for-7 for 147 yards and 3 touchdowns. Vasquez was a perfect one-for-one for 46 yards and one TD. Barnes threw for 46 yards and was 1-for-1 and threw a TD pass.

Defensively, Eads recovered 6 fumbles with Barnes leading the way with three. McDowell led in tackles with 6 while Medina and Barnes had 4 tackles apiece, and Sierra had 3 tackles.

The Hanover game was a key win for Eads that more than likely got them in the playoffs. However, if they can defeat Cheraw next week in their final game of the season they will be sitting pretty in the league and should secure a playoff berth.

Eder knows what’s coming stating, “Overall, we had a great game, but an even bigger game is coming up next week with Cheraw. We should be setting good in RPI now in order to make the playoffs, but the game with Cheraw is a huge game for us for seeding in the playoffs.”