Written by Betsy Barnett on 23 October 2019. Posted in Sports

It was a long week of volleyball for the Eads Lady Eagles as they played three matches, all on the road, traveling south, north and west in about five days. They would first travel to McClave for a key meeting with the Cards who has had Eads’ number over the past few years. On Tuesday Eads surprised the struggling Lady Cards in four sets including scores of 25-18, 20-25, 25-23 and 25-22. 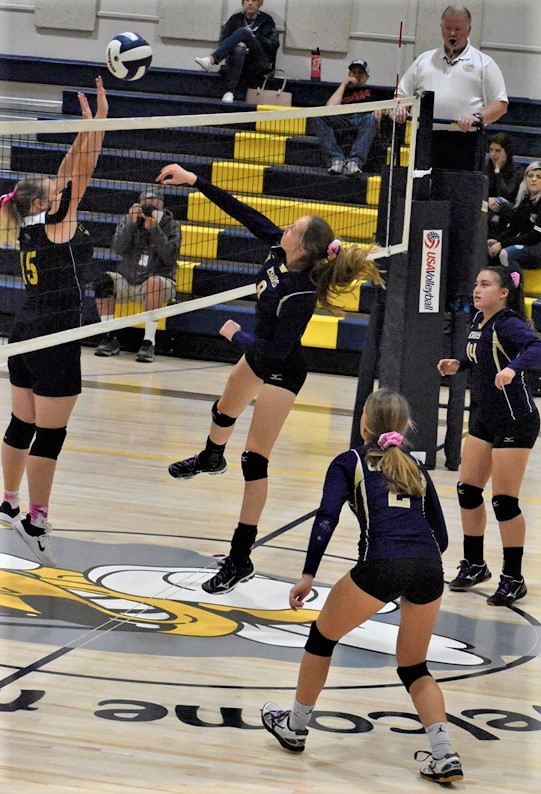 After the disappointing performance in Idalia, the Eagles got on the bus on Saturday morning and headed to Hanover located just west of Colorado Springs. On the way, their bus had issues causing them to be delayed. Then the fire alarm went off in the gym during the junior high match. Among all the disruptions, the Eads girls played well enough to defeat Hanover in three straight sets in score of 25-12, 25-14, and 25-8.

The McClave win was a key one as it puts the Lady Eagles into second place in District 2 behind Kit Carson with a 3-1 league record.

During the contest with McClave, Rhealie Rittgers’ serving was outstanding as she scored 13 points during the first game. Rittgers led in kills with 11, followed by 10 kills for Ally Spady, 7 for Maggie Haase, and 4 for Lauren Brown. Spady led the way in the blocks category with 3; while Haase denied two and Kyra Sheridan added one more.

In the serving department it was Rittgers who led the way with 4 ace serves, while Samantha Courkamp and Watson each had 1 ace serve. 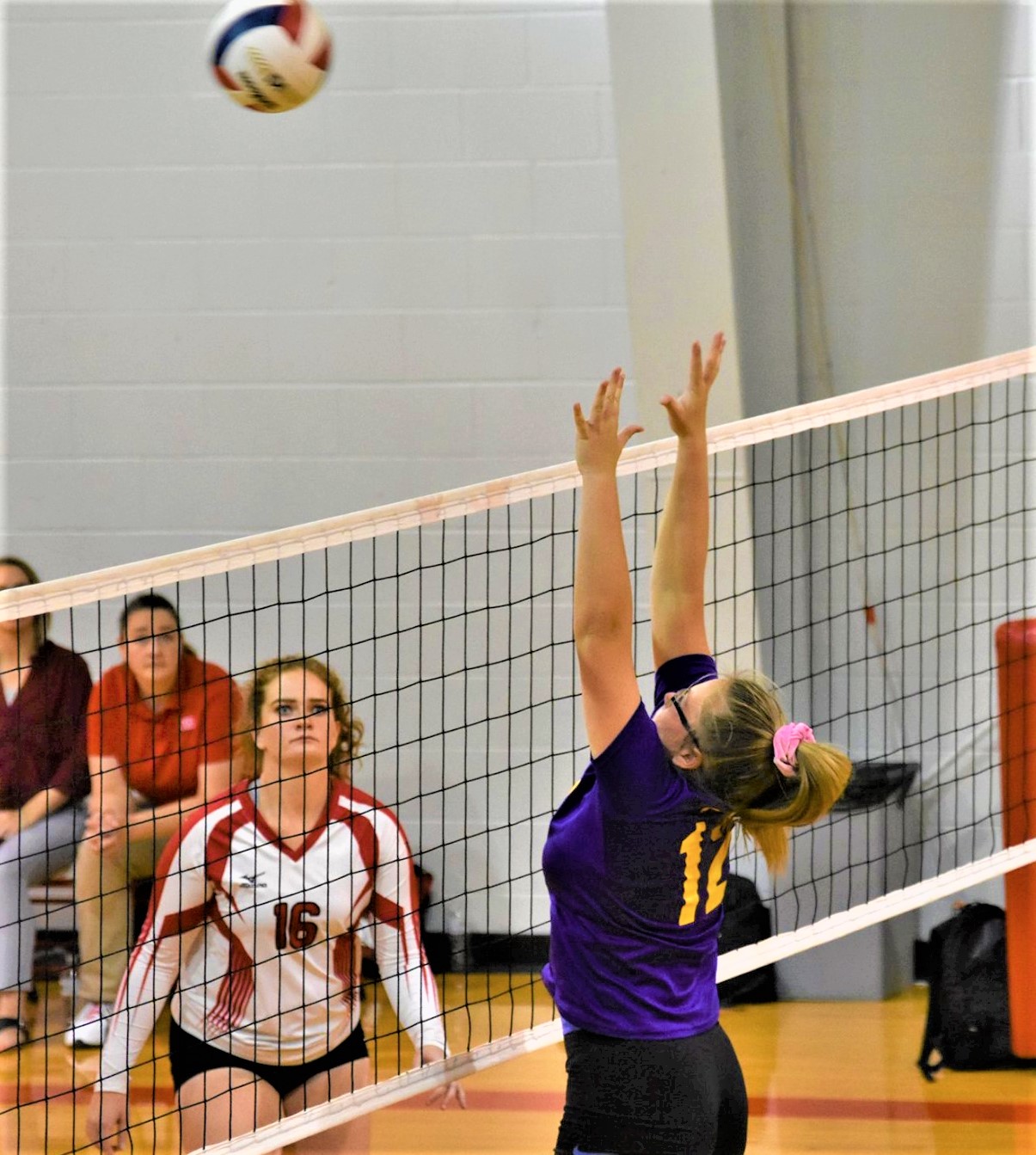 v
McClave was led by Maggie Chase with 16 kills and 16 digs. Anna Beckett had an all-around great match with 11 kills, 5 ace serves, 2 blocks and 20 digs. Kaitlyn Roesch had 44 digs.

The Thursday contest with the 7-10 Idalia Wolves was not Eads’ finest moment. Coach Chelsea Davis said it best, “Idalia in one word …. Disappointing!”

After such a big win over McClave, they traveled the good distance north and just did not, metaphorically speaking, get off the bus playing with little focus. The Eagles lost the first two games as they struggled with committing many errors. They would finally put together one very good set where they completely controlled Idalia, but that was it as they never really showed up and Idalia was good enough to come through and grab a win.

After the disappointing performance at non-conference Idalia, the Eads girls had yet one more road trip in front of them. They traveled to Hanover and promptly took care of the Hornets in three very quick sets. 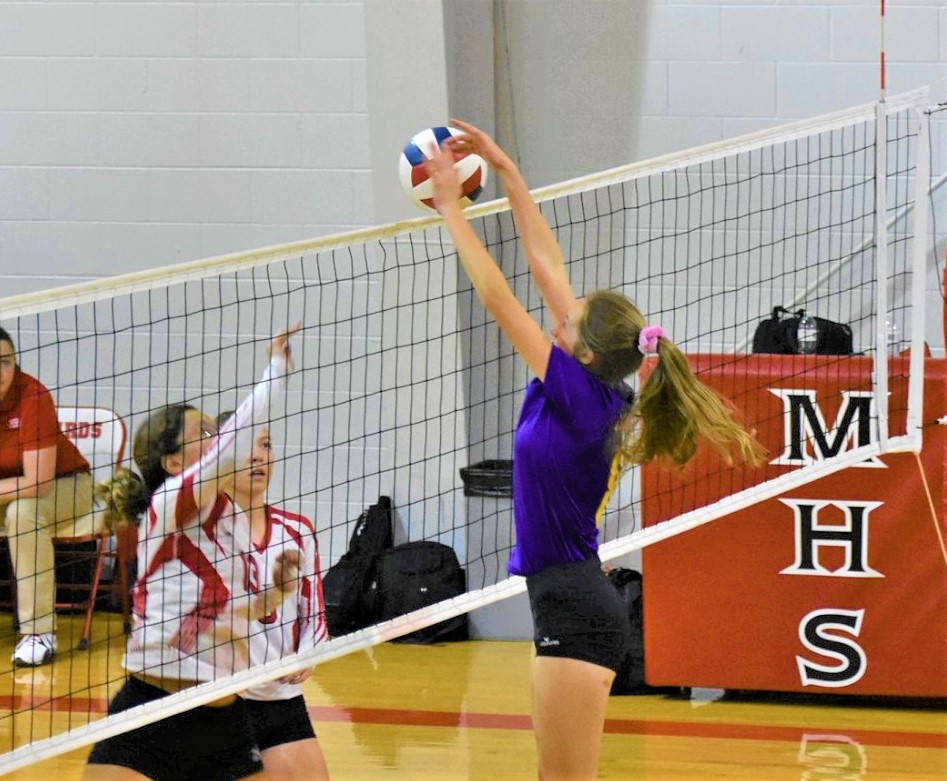 Numerous Eads players picked up their effort in Hanover despite their fatigue. Again, Rittgers led the way with 10 kills and 15 digs. Spady had 4 kills, 19 digs, and 4 assists. Haase had 3 kills and 1 block. Kyra Sheridan had an impressive 6 ace serves. Lauren Brown put in 5 ace serves and 8 digs.

Coach Chelsea Davis was pleased with the play of freshman Brianna Habinck who got some important time at the middle hitter position. She had one block, 7 digs, and 6 assists during her time on the court.

Eads now has one more very important conference match, again on the road, at Cheraw who is currently 7-9 overall and 2-2 in conference. Eads needs to win this match which will secure their second place seed going into next week’s District 2 Tournament.

Photo 1: Eads middle hitter Maggie Haase (#8) attacks againt Trinity Griffin (#15) during non-conference action at Hanover on Saturday while Samantha Courkamp (#14) and Rhealie Rittgers (#2) are ready to pick up the block.

Photo 2: Kyra Sheridan goes up for a block during Eads vs McClave volleyball action.  Eads won 3-1 to secure the runner-up seed in the upcoming District tournament.