Only Ten Lady Eagles on the Roster

Written by Betsy Barnett on 04 December 2019. Posted in Sports

For the past two seasons, the Eads Lady Eagles basketball teams have made some noise in the post season getting into the regional tournament, but just not able to get over that hump to advance to the coveted 1A State Basketball Tournament. Last year they were defeated by Springfield, 42-36, in the first round of regionals. 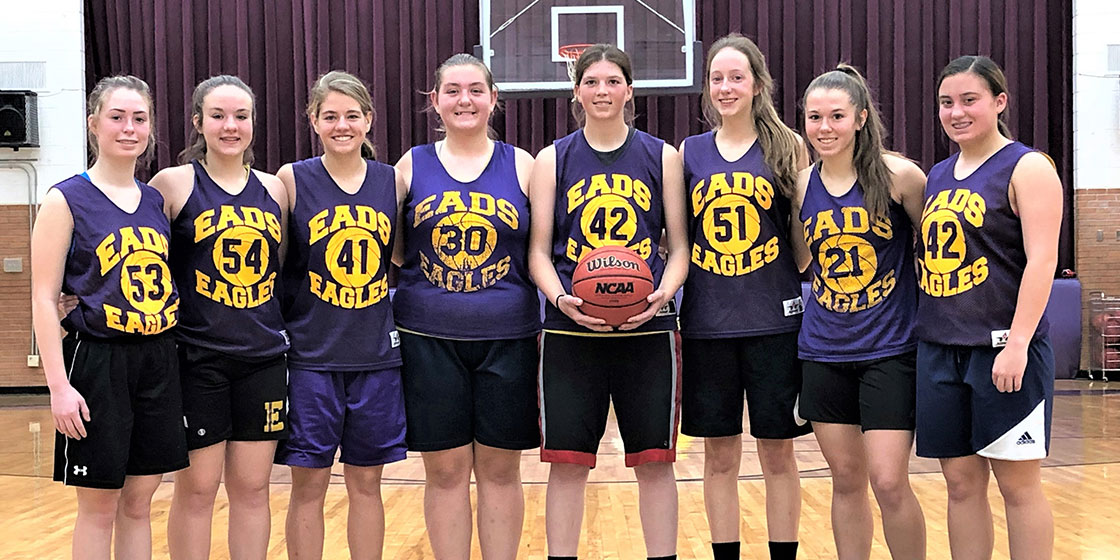 This year’s team is down quite a bit as graduation did a number on the outlook for Eads. They also lost a couple of young, but upcoming players who chose not to play this year. The result is a complete make over for the few remaining Lady Eagles and their coach Trey Eder.

“We have 10 girls this year. We have two starters returning in point guard Ally Spady (7.9 ppg/3.7 rpg/2.5 steals per game) and post Morgyn Johnson (8.0 ppg/6.6 rpg). So, we have some spots to fill. Also returning is Rhealie Rittgers (1.5 ppg/1.7 rpg) who saw a little time last year and will be one looking to fill the starting spots. Crystal Watson is the only other returning player from last year.”

One bright spot is the return of senior 5’11 Kaycee Ellenberger after a year’s hiatus. As a sophomore, Ellenberger was starting to figure some things out and now she will need to learn very quickly in order to step into a strong starting role. Eder concluded, “Ellenberger is athletic and can run and jump so we hope to work her into being a serious threat for us.”

Other players who can step in and help and who will play a lot for us will be Lexi Lopez, a junior transfer, and then our freshmen include Sam Courkamp, Maggie Haase, Brianna Habinck, and Piper Sorter. Eder states the obvious, “So we do not have much experience on the floor, but we do have a group that is working hard and learning the system. I’m really looking forward to seeing what this group can develop into and surprise people.”

Overall, the youth and inexperience of Eads will more than likely hamper them for a while as the varsity learning curve will be large for them this year. However, they have set some goals for themselves. “First to just work hard and improve. We’d like to keep our regional appearance streak alive,” stated Eder.

Eder thinks their very difficult start to the season may in all reality get them battle tested for what lies ahead toward the post season. They begin with a trip up north to take on an always solid Flagler/Hi-Plains group on December 6. This year, for the first time, Eads enters the Border Wars in Kansas where they will spend three intense days of basketball on December 12-14 over the border playing against Greeley County, Syracuse, and Elkhart. They wrap up the preseason with the much anticipated and highly competitive Lamar Holiday Basketball Tournament that has become one of the premier tournaments in the state on December 19-21.