The Thing About Streaks is they Always End Sometime

Written by Betsy Barnett on 18 December 2019. Posted in Sports

The highly anticipated game the entire state was looking forward to last weekend turned into one of those less than expected events as Kit Carson’s impressive winning streak fell one game short of tying the all-time state record, for all divisions, of consecutive wins. The Wildcats were sitting at 77-straight wins and needed one more win to tie the 78 games consecutively won by McClave in the early 2000s. However, the luck of the draw didn’t go their way as they drew the #1 team in 2A, Limon, to be their season opener and thus the Badgers would break the streak in a lopsided, 50-14 win. 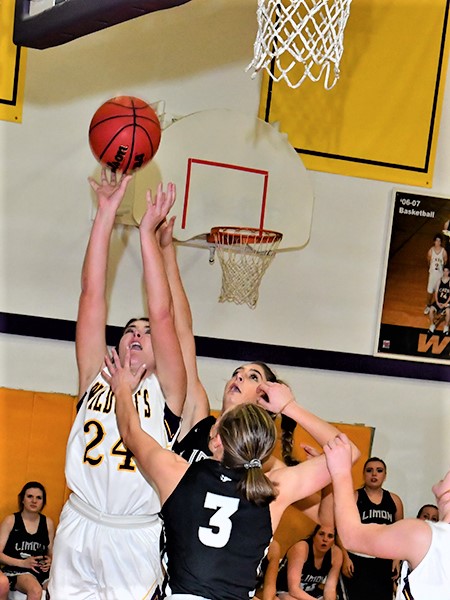 The weekend where Kit Carson had a chance to get the most coveted record was further anti-climactic when they lost to Wiley, 51-39, the next night. Sara Crawford’s team has enjoyed three consecutive state championships but is now in the rebuilding stage as they lost four of their five seniors from the state teams from a year ago. She now has the job of developing the next crop of players.

Of the loss, Crawford stated, “Even though losing always hurts, this one stung a little more. Knowing that we were one win shy of tying the 1A consecutive wins record is disappointing, but as a good friend of mine told me, there are probably 300 other programs that would love to be in our shoes. I know we have so much to be thankful for!”

These are the human interactions in small towns that makes for great sports stories. To Crawford’s credit, as also the Athletic Director of the school district, she could have scheduled the start of the season soft in order to ensure her youngsters were able to get the record with two wins. But she didn’t which says much about the character of the coach and the respect she has for her team, the Kit Carson system, the game of girls’ basketball, and even to McClave. In addition, the Crawford family had their own unique drama going on in the Limon game as Crawford’s niece, senior Sidney Hines, turned out to be, as fate would have it, the player of the game with 15 points, 10 coming in the first quarter when Limon took charge of the contest. Like the competitors they are, all members of the Crawford family respected their varying situations, but, at the same time, played to win --- as it should be.

In summary, Kit Carson came into this year sporting one of the most phenomenal resumes a program can imagine. They had a 123-2 record over the past five seasons with both losses coming at the state tournament. The last time they lost a regularly scheduled game was on February 14, 2014 when Eads beat them. And, they have won three consecutive state championships and five consecutive Lamar Holiday Basketball Tournament championships.

Kit Carson started out the game with Limon with an opportunity to make a strong statement, as they got the ball first and created a good opportunity to jump on the lead but failed to get the ball in the hoop. “We had the first opportunity to score but didn’t finish and that just seemed to lead to an unfortunate chain of events.” 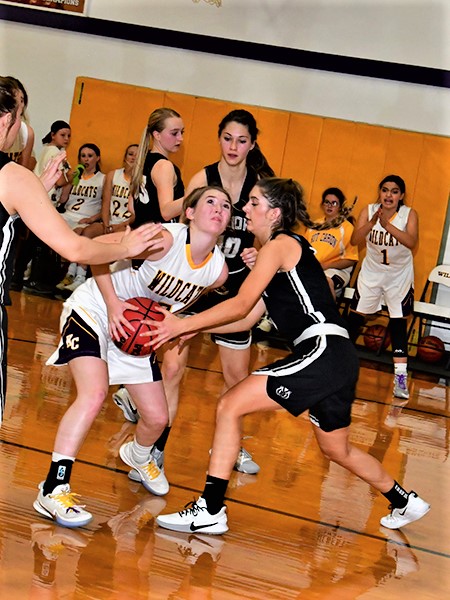 And that’s the way it went for the rest of the night as the Limon defense was brutal using a full court man and full court diamond trapping zone to keep constant pressure on the Kit Carson rookies. They also double teamed the only senior on Kit Carson’s team, Reyna Isenbart, who was in foul trouble all night and had little opportunity to score. The Badgers went inside on Isenbart on every possession and got on the line numerous times. Once their leader went out, the youngsters from the Kit struggled to compete against the intense senior-laden Limon team.

Crawford agreed, “Limon’s defense gave us fits all night as was apparent by our very low score. They are tall, quick, and aggressive.”
Crawford also wanted to get her girls to the free throw line, but they were cold there as well as from the field.
Limon, for their part, did not struggle much from the line hitting for 21 points on 35 shots and they out-boarded the Wildcats with 34 rebounds. Hines led all scorers with 15 points and had 4 steals. Trista Marx pulled down 10 boards.

For Kit Carson, junior Cally Booker-Rady had 6 points and 5 rebounds.

Kit Carson then turned around the next night and had a much closer game with Wiley than the score would indicate. Crawford said, “We were thankful to have the opportunity to play another good team on Friday. But, again, we were plagued with the inability to finish at the free throw line. We definitely shot better than we did the previous night, but we allowed Wiley to score more than what we planned to, but that was partly due to their ability to shoot free throws at the end when we needed to foul to stop the clock.

The game was extremely close until the end. After the first quarter the score was knotted at 11, but Wiley grabbed a two-point lead going into the intermission. In the third quarter, the Cats came roaring back and were just down by a point going into the final stanza. However, to win a basketball game you have to have the lead within the last two and half minutes and the Cats, in the final stanza, found themselves flat and got behind. They were then forced to foul in order to stop the clock.

The athletic Wiley group put in a solid 65% performance from the charity line, most coming in the final period.

For the Panthers it was Macy Rowen who had a heck of a game with a double-double pouring in 20 points and pulling down 11 rebounds. She also had 10 steals in the game. Demi Wollert had 10 points, including 2 long balls, and 7 rebounds. Jaelin Parker added 8 points and Keely McVicker pulled down 9 boards.

Despite the disappointing start to the season, Crawford has big plans for this group, “We may not be at the skill level we want to be yet, but this group definitely doesn’t lack in heart and effort. This group doesn’t know what the word surrender means so I know they’ll do what they need to do to compete with the best.”

The Cats enter the annual Lamar Holiday Basketball Tournament this weekend in a new position of the #7 seed as they bring in a 0-2 record. They will still be looking to defend the crown they have held for the past five tournaments. The girls’ tournament tips off on Thursday morning, December 19. The Cats will first have a look at McClave, seeded #2, in the third girls’ game slated at 12 noon at the Lamar Community Building.