Written by Betsy Barnett on 18 December 2019. Posted in Sports

It’s the best start to an Eads season in 10 years as the Eagles competed in the very tough Border Wars over the weekend and came away with two wins out of the three games played. Eads is now 3-1 on the early season. 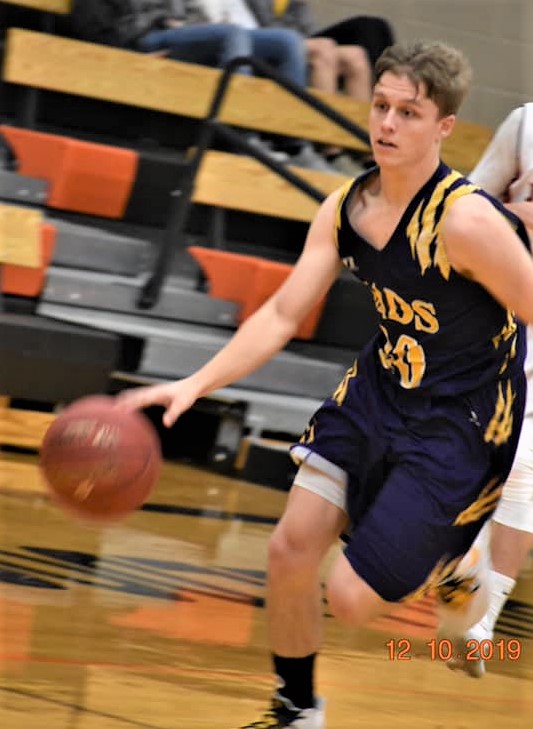 As Colorado basketball fans know, traveling into Kansas means a whole new ballgame in the officiating category and Eads had plenty of opportunity to feel the wrath of the touchiness of the officiating rules in the Sunflower State.

According to head coach Marcus Gilmore, “We knew we had a good shot to win some ball games over there in Kansas if we could manage our fouls. As expected, we got into foul trouble quickly in all three games. In games like that our guys off the bench couldn’t be more important. They came in and did a great job for us to be able to come away with two wins.”

Eads played in some exciting and close games in the Border Wars and came away with some great experience and even better results. On Tuesday, they took on the Greeley County boys from Tribune and won in a tight battle, 55-51. They then played the host, Syracuse, on Friday but the foul trouble was too much to overcome resulting in a 50-36 loss. Finally, by Saturday, the Eads boys put together a very nice win, 72-64, over a good Elkhart, KS team.

Gilmore added, “Games like those are exactly what we need early in the year. We’ve still got a ton to learn and winning tough games like those are a positive way to walk away with a few new lessons. With the Holiday Tournament coming up we couldn’t have asked for better games to get us prepared. Syracuse has a loud gym, so it was a good environment to cut our teeth on. We were able to make mistakes and adjust in some close games and finish them with the win.”

Tuesday’s game against the Jackrabbits had the Eagles coming out firing on all cylinders as they outscored their opponent 13-9 in the first stanza. Getting on a roll were senior Alex Schmidt, who hit a couple of deuces and two free throws, and junior Hatch Nelson who added a deuce and a trey early. However, by the second period the foul trouble had set in and Eads was forced to sit some of their main players including Damien Barnes who leads the Eagles in rebounds. The fouls also put the Jackrabbits on the line 12 times in the second quarter where they capitalized on 8 of them. By halftime the score was knotted up 23-23.

The third quarter opened up for Ty Wilson who drained a couple of three-balls and a deuce. Schmidt continued to do an excellent job of running the ball for Eads and managed to stay on the court, avoiding foul trouble. The Eagles gained a three-point lead going into the final stanza where Cade McDowell and Schmidt each hit a three ball and Barnes and Joe Haase worked to score off the boards. Both teams shot a ton of free throws as they were quickly in the double bonus late in the game.

Schmidt had a solid performance with 22 points, 7 rebounds and 7 steals. Barnes added 6 points, 14 rebounds, and 6 assists. Wilson had 10 points and 6 rebounds.

The Syracuse team was the best team at the tournament, but Eads played them solid through most of the game until they got into foul trouble. Syracuse would score 20 points from the charity line after shooting a large number of 34 free throws. Eads would foul out McDowell, Hernandez, and Wilson in the contest. 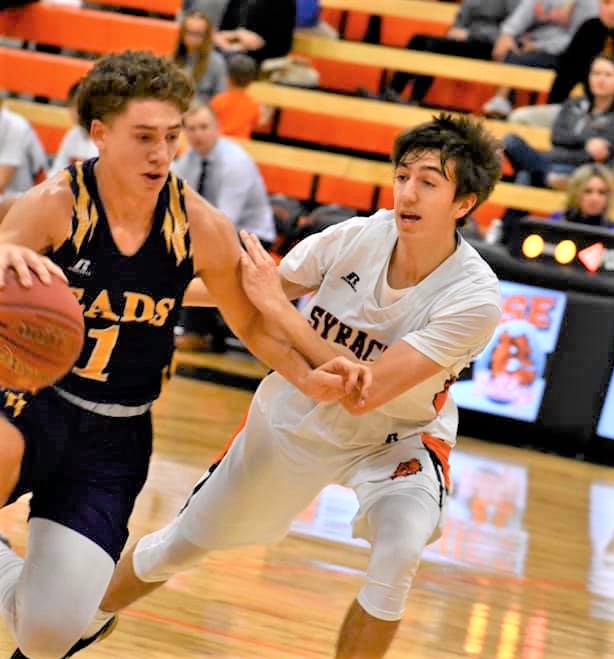 The Eagles had the lead after one period with Barnes and Schmidt leading the way with a three-ball apiece. However, in the second period Syracuse picked up their defense and Eads got in a bit of foul trouble resulting in a 24-17 deficit for the Eagles at the intermission. Eads lost a bit more ground in the third period but were right in it up to the end when they lost the bulk of their team to fouls and Syracuse won the game from the charity line.

Schmidt, again, led the way for Eads with 11 points including 2 long balls. Barnes had a solid game with 9 points, 7 rebounds, 4 assists and 2 steals. Hernandez and Lening each added 5 points.

In the final game of the tournament on Saturday Eads would be challenged by Elkhart, a team that had beaten a good Granada team the night before. This game was ugly throughout as a total of 71 free throws were taken between the two teams. The Eagles actually got on the line more times than Elkhart hitting 19 of 39 attempts. Elkhart hit 19 of 32 attempts. Eads and Elkhart also paced one another from the perimeter hitting five three-balls apiece. Therefore, the game came down to the boards and to defense.
On this night Cade McDowell came into himself as a player as he played with intensity and with no fear attacking the interior of the Elkhart defense. The Eads sophomore hit for his first ever double-double with 21 points and 19 boards. He also had 3 assists and 5 steals to his credit. Barnes, again, was solid coming in with his own double-double in the game hitting for 13 points, pulling down 15 boards, dishing out 3 assists, and stealing the ball 3 times. Schmidt added 12 points, including two more three balls. Wilson also had a double-double with 11 points and 10 boards. Lening was steady adding 7 more counters.

Gilmore is very focused on the upcoming Lamar Holiday Basketball Tournament as it perhaps means more to this program than meets the eye. “We have new things to work on and a short week of practice so we will have to have a good three days to be ready. We play Granada in the first game and they are always a team that’s ready to play.

It’s been a long time coming for us to do well at the Holiday Tournament. We’ve had a curse of first round losses down there and that’s a goal for us this year to break.”

Gilmore is correct as it has been a long, very long, drought for his Eagles in the Lamar Holiday Basketball Tournament. The last time Eads won the first-round game earning the right to play in the night sessions in the semifinals and finals was in 2009. In that year, they won their first game but lost their second two placing fourth in the tournament. Before that, sports historians would have to go back to good ‘old days of Eads basketball when Gilmore was a player and Eads was in the state tournament five years out of six.

The Eagles, with a 3-1 record, will enter the Lamar HBT with the highest seed for many years in the #2 spot. They take on Granada, a very tough #7 in the quarterfinals on Thursday at 7:00 pm

Gilmore knows this first game is key, but in the bigger picture he says, “We’ve got to continue to keep working and looking forward being four games in and have already won more than last year."