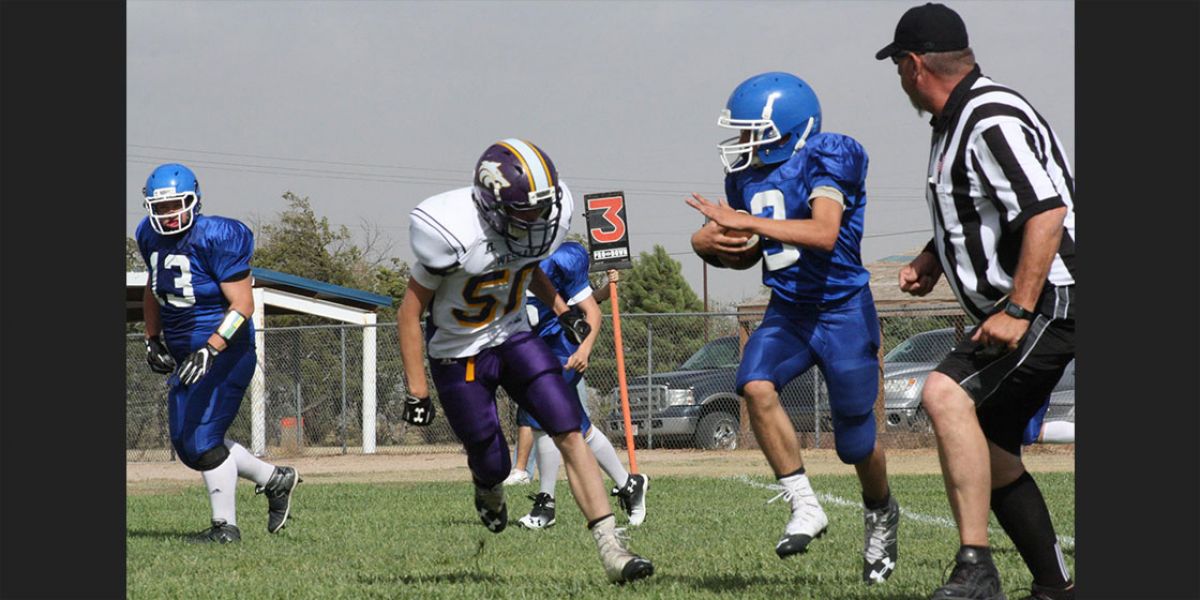 Hawks fans were excited to see their Plainview Hawks back on the gridiron after a number of years of absence from preps football.  Last week Plainview was able to have a successful Homecoming celebration as they hosted Weskan (KS) JV team on Monday afternoon.  Despite the terrible winds on that day the fans were treated to a good game with Weskan getting the win, 28-13.
The Plainview Volleyball team also saw action during Homecoming losing 3-0.      The Hawks then traveled to Hugo on Saturday as they agreed to play the Genoa-Hugo Pirates at their Homecoming game after two other teams cancelled on them.  The Genoa-Hugo fans were very welcoming to the Hawks as the young team bravely faced a state-ranked varsity team and never gave up throughout the entire game.  The Pirate varsity was obviously superior to the inexperience and youth of the Hawks players as they quickly scored points off of ball possessions and Hawk turnovers.  By the end of the first period the mercy rule was on the clock with Plainview trailing 45-0.
The score extended to 59-0 by halftime.

The fans at the Genoa-Hugo field saw something not seen every day when the Pirates’ Homecoming Queen and her parents entered the field from a helicopter!
After the Homecoming ceremonies, Plainview put together two good periods as they spread the field time and time again using the pass to try to advance offensively.  The youngsters ignited the crowd when Alex Schmidt caught a long pass on 4th down that came from Benjamin Splitter.  It looked like Schmidt had a touchdown but the play was called back to the Genoa-Hugo 25-yard line where Schmidt went out of bounds.  But a couple of plays later Shawn Barton found himself scrambling and looking for someone to pass to when he finally hit Grant Specht wide open in the end zone for the Hawks’ first TD of the day.

At the end of the third period Barton put a good hit on a Pirate player stripping the ball from him and recovering the fumble.  That hustle play set up a 29-yard touchdown run by Barton with less than a minute left in the game.