Written by Betsy Barnett on 30 January 2020. Posted in Sports

The Eads girls only have a 3-10 record but gained two of those wins over the weekend against quality teams. They first traveled to Granada to take on a Bobcat team that had given every opponent all they could handle and gaining a few wins in the meantime. But the Eads girls came out strong and used their feisty defense to hold off the Lady Cats, 43-27. Then, the next night in Eads, the young Eagles shocked maybe even themselves as not only was their defense solid, but, all of a sudden, they found the bucket hitting an impressive percentage of the shots created. They came away with an upset win over an 8-2 McClave group that had beaten Eads in the Lamar HBT in December. On this night Eads held on to a strong late game attack to win, 39-32. 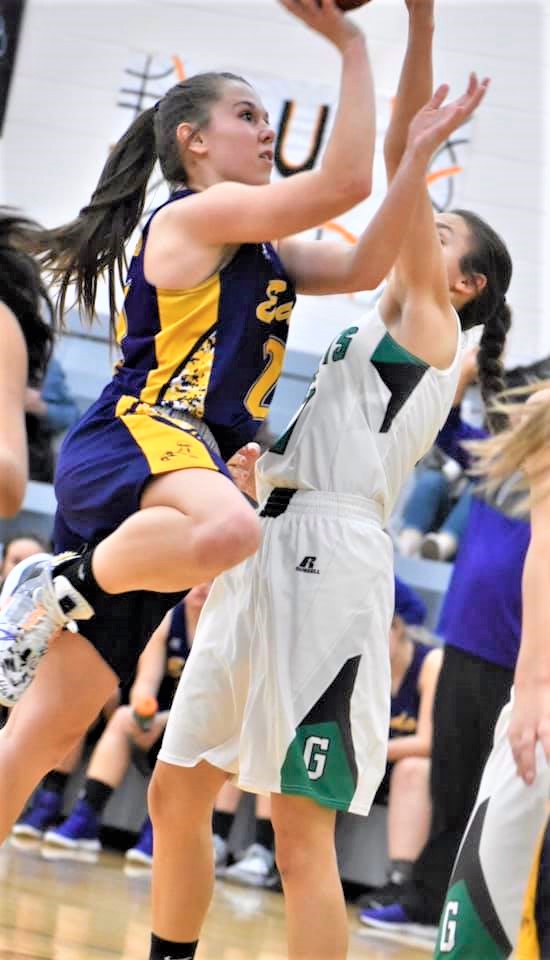 The importance of the two wins cannot be understated.

Coach Trey Eder was very relieved that the hard work they have put in on shooting during long practices seemed be paying off, “It was a great weekend for us for sure. Not only just to get a couple wins but wins against tough league opponents. With two league games it was a tough week as seeding is determined by these games. The girls played extremely hard both nights and fought until the end. Hard work paid off. It’s always good and exceptionally rewarding when you see the work you put in finally pay off. We have put tons of time in trying to get our shooting on track and it seems this weekend that finally the practice time is paying off. When shots fall, we are a dangerous team with the way these girls have bought into defense.”

The Eads did defense pave the way for their successful weekend as they started out strong in Granada holding the Bobcats to just six points in the first half. By the intermission, Eads had a 17-6 lead, but were not producing all that much. However, by the fourth quarter Granada came alive and hit three long balls and most of their free throws to challenge the Eagles’ lead. But Eads held strong and a full-team effort paid off as they hit for 18 in that final quarter.

The future for Granada looks very bright, despite their losing record, as they play almost all freshmen. On this night against Eads three freshmen carried the load with Naudia Morales hitting for 9 points and pulling down 8 boards; Vanessa Ayala had 5 points, 3 assists and 4 steals; while T. Quintana added a strong 8 rebounds to the total. Granada would actually outboard Eads, 32-27.

With that win, Eads entered their game with McClave as the definite underdog. The Lady Cards brought their strong defense to the Eagle court but found that Eads had defense to match forcing the Cards into hurrying a number of errant shots. For their part, Eads came out with the best shooting performance they had had all year. They outscored the Lady Cards in both the first and second quarter and went to the intermission with a shocking 25-12 lead.

Production for Eads came from all four of the main players including Johnson, Rittgers, Ellenberger and Spady. Freshman Maggie Haase had a strong game overall using her length to bother the Cards on the defensive side of the ball.

Unfortunately, Eads came out of the lockers a little cold forcing up a number of bad shots. Then Johnson got into foul trouble and was forced to take a seat for the remainder of the quarter. Her absence was felt as Eads only produced 4 points in the third and McClave started finding their confidence when Johnson left the floor. By the end of that dismal third period, the Cards had gained ground, but still trailed 29-20. 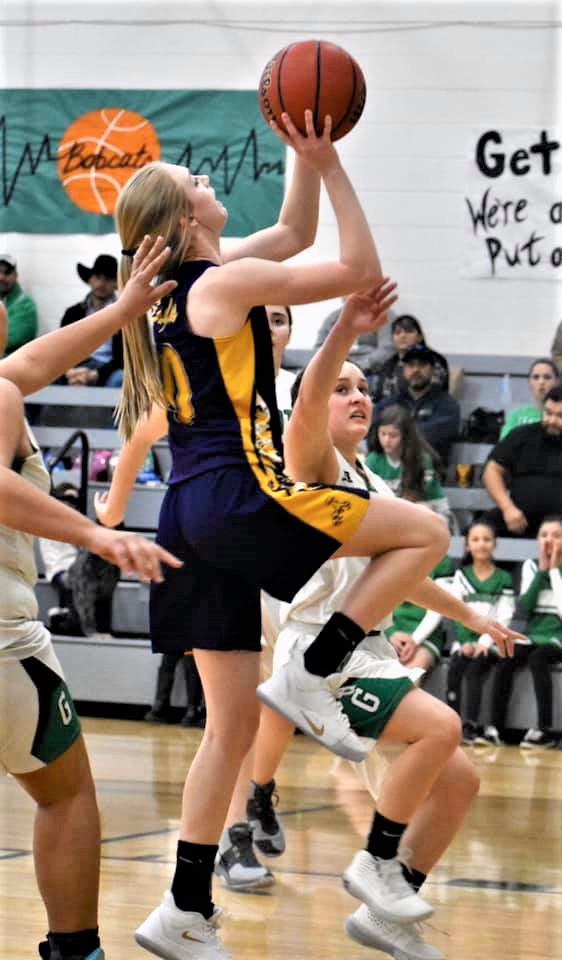 Of the McClave game, Eder commented, “Like us, they pride themselves on defense and we knew it was going to be a battle. They play tight man to man defense and with our inexperience that can be troublesome at times and after a while that kind of game can wear you down. But we battled and played our game most of the night and matched their defensive intensity and made buckets to go along with our great defense.”

The game came down to Eads being able to handle the ball to run time off the clock and also to make their free throws once McClave was forced to foul. They did both jobs well and finished the game. Rittgers, in particular, hit 3-of-4 down the stretch to keep Eads alive long enough to finish it.

Johnson had an impressive game with a double-double performance of 10 points and 12 rebounds. The senior also had 3 assists and 5 steals. Spady added 8 points and took all the ball pressure during the contest. Ellenberger was solid with 7 points and 7 boards. Rittgers came through with a gutsy performance hitting for 9 points and grabbing 5 boards. She also dished out 4 assists.

For McClave it would be sophomore Anna Beckett who led in the scoring department with 10 points. Maggie Chase was a brute on the boards pulling down a remarkable 17 rebounds and she also had 6 steals. Katie Roesch added 7 points, and Katie Bronniman added a strong 8 rebounds.

On Friday in Eads there was also a half a game of JV girls’ action with McClave coming out on top 22-7. For Eads Crystal Watson had 4 points, Haase added 3 points, and Piper Sorter had a bucket. For McClave Cassidy Jagers led the way with 10 points.

Eads will now face two formable opponents from District 3 including the physical Wiley Panthers on Wednesday in Wiley. The Panthers are 8-3 on the season and as of late have played strong ball. Eads then hosts Kim/Branson on Saturday night. The K/B group has produced a 6-4 overall season record.

As for Eder, he plans on continuing with the constant shooting drills as they paid off this weekend, “We know nothing is going to come easy and we need to continue to work extremely hard. We will be continuing our shooting in practice and preparing for a tough schedule going forward.”