LOOKING BACK AT THE SUCCESS OF EADS TRACK IN 2019

Written by Betsy Barnett on 15 April 2020. Posted in Sports

As the weeks of no spring sports continues to slowly move past us, we look back once again at the wonderful track & field performances from 2019. This week we remember the Eads track teams from a year ago and offer recognition to 2019’s juniors who, as it ended up, finished their preps careers last May along with the seniors. Funny how things turn out.

Two girls, who were very successful as juniors a year ago, were slated to take the leadership role for the Eads team this year that returned nearly everyone. Kaycee Ellenberger placed at state in the 100M, 200M, 4x200M Relay, and was part of a state championship in the 4x100M Relay. She and her younger teammates were primed for perhaps a repeat performance this year. Morgyn Johnson was a strong jumper for Eads qualifying for state in the high jump and gaining a lot of points for the Eagles in the triple jump.

The Independent salutes these athletes from the Class of 2020 and wishes we all could have enjoyed watching them compete in their final year of eligibility. In honor of them, we reprint the final track & field article from 2019. 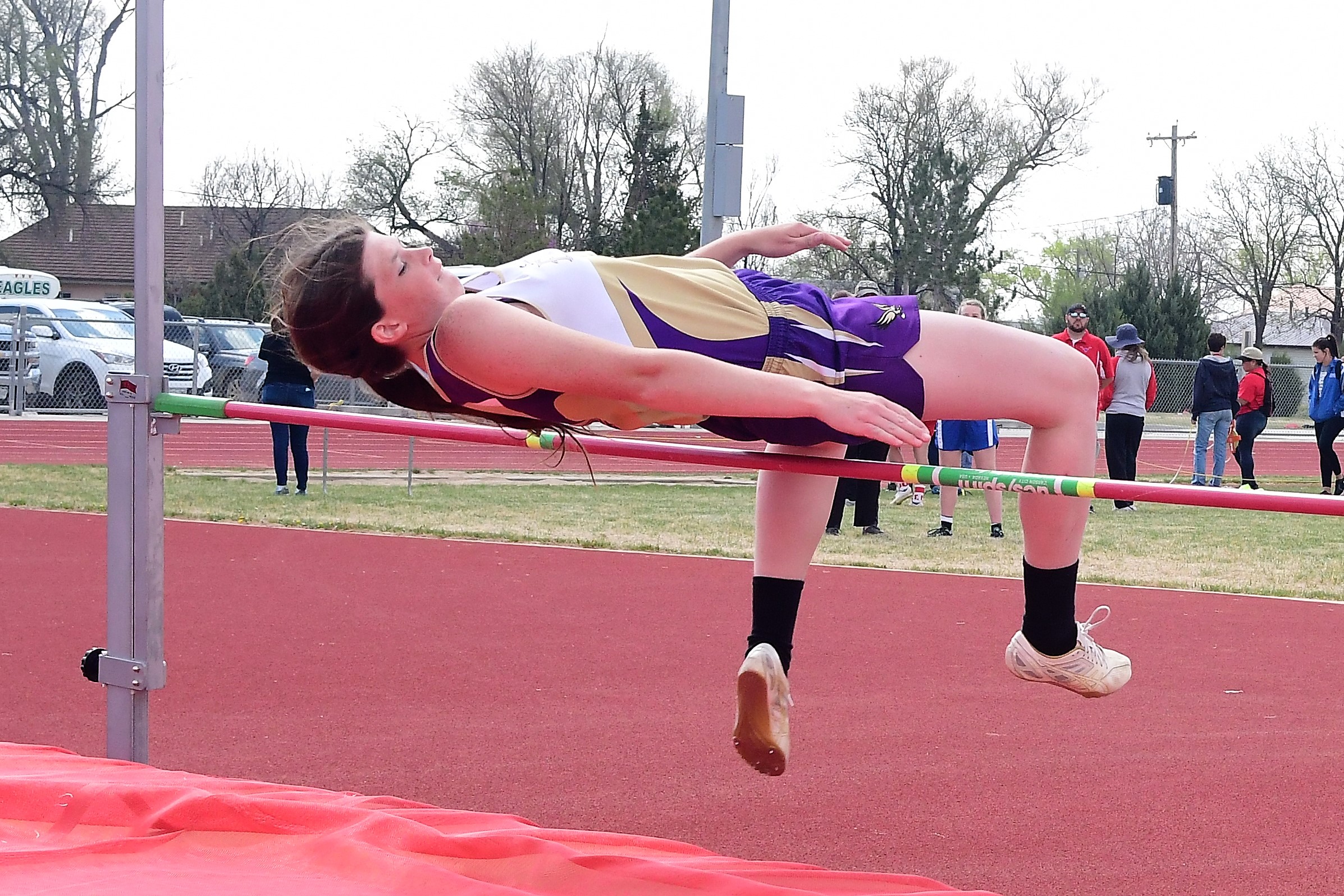 According to Eads head track coach Stephanie Bohlander, the Eads girls gave it all they had at the 1A State Track Meet at Jeffco Stadium over the weekend, where as a team they placed 6th scoring 55 points in a very tough field that saw DeBeque run away with the team title. Springfield, a team Eads had tried to chase down all season, ended up in third place with 60 points, Merino was 4th with 57 points, and Lone Star just inched out the Eads girls in fifth place scoring a half a point more at 55.50.

“We did our best! We PR’d in every single event except for three. That just shows that the competition was fierce, and we did all we could do. We can live with that.”

The Eads girls continued to shine against such competition as they brought home a good number of medals and one very exciting relay state championship in the 4x100. According to Bohlander, “In winning that state title, we have brought home at least one title in nine out of the 11 years we have been up there competing.”

The weekend started out very bright for the Lady Eagles as in their very first event, the 800 Medley Sprint Relay, they broke a school record placing in fourth place in a time of 1:57.20. Team members included senior Reagen Johnson, sophomore Ally Spady, senior Brooklynn Jones, and freshman Crystal Watson. The old standard was set last year in 2018 by nearly all the same athletes including Johnson, Spady, Miranda Mitchek, and Ellenberger.

Freshman Rhealie Rittgers also had her 3200M race on Thursday and gutted out a strong performance getting some points for her team in 8th place in a time of 13:56.93.

Thursday also saw the first of two throwing events in which Eads would game some much-needed points. The Discus competition was tough, but sophomore Colby Stoker managed a 110’ 7” effort that got her on the podium in the fifth-place platform. She was just behind Kit Carson’s Tess Hornung who came in fourth.

The sun was shining brightly on Friday as the Eads girls continued to battle for dominance. They would face off in the jumping events and then run the relay considered their best in the 4x200. Bohlander said she was surprised how strong the 1A jumpers were as senior Kaylee Wilson just managed to score a point for Eads placing 10th in the Triple Jump with a best effort of 31’ 2.75”.

However, at the high jump pit the Johnson sisters, Reagen and Morgyn, were scrapping against the competition. They both had impressive performances with each cheering on the other. Reagen came through at 4’ 10” good enough for fifth place. Morgyn tied with McClave’s Anna Beckett for 6th place with a best of 4’ 8”.

Finally, it was time for the event the Eads fans had been waiting for---the 4x200 Relay where Eads was ranked right there with Springfield having finally beaten them in Limon the week before. According to Bohlander, “We ran very well, right at our best time, but the hand offs were a little shaky due to the wind. If those aren’t perfect, it doesn’t matter how fast you are. It wasn’t a poorly run race, just not GREAT like it needed to be.”

Saturday turned chilly but the competition was still strong as the Eads sprinters were on the track. Kaycee Ellenberger, a long but strong junior runner, placed 8th in both the 100M and 200M sprints. Bohlander said, “Kaycee was disappointed but her 13.20 in the 100M and 27.74 in the 200M were darn good times.” 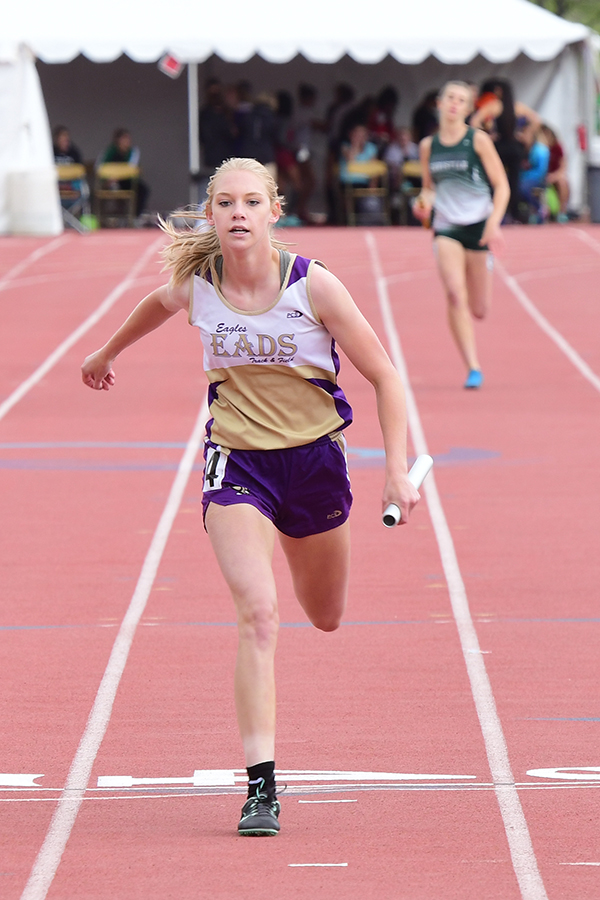 Wilson was again in the jumping pit taking on the competition in the Long Jump. Again, she jumped very well at 14’ 7” but the rest of the pack was good too. Kaylee would only manage another point placing again in 10th place overall.

But, then, just when the exhaustion of the long weekend could have begun to sink in the Eads girls came unglued in their final two events of the season. First, Colby Stoker came through with a monster throw in the Shot Put with a 37’ 3” and earned a state runner-up medal. Hornung would come in behind her. Freshman Kyra Sheridan learned how every single inch counts as she was robbed out of fourth place by Elbert’s Olivia Lay who threw .5 inch further than Sheridan’s 33’ 1” best on her last throw. Sheridan had to settle for fifth place, but the incident left the 9th grader hungry to train for the future.

Everything then came down to the final event for the Eads girls, the 4x100 Relay. Coach Bohlander described the championship run, “Before the 4x1 we talked and I told them there was no added pressure, and to just go out and run for the last time together and make the last be fast. I knew how badly they wanted to win that race for each other and their team. What we saw were 4 talented and selfless young ladies putting everything they had on the line for one another. Our exchanges were perfection and they just went after it. It was so priceless to watch their confidence and aggressive attitudes pushing the exchanges to the max.”

Senior Brooklyn Jones would lead off in the 4x100 Relay setting the pace for senior Kaylee Wilson whose leg on the back stretch was tremendous. The exchange between Wilson and Ally Spady in the third leg was very aggressive and Spady got out quick gaining ground on Springfield around the curve. By the time Spady handed off to anchor runner Kaycee Ellenberger there was no doubt Eads was in control. Ellenberger out-distanced everyone winning by a full second over second place Springfield in a time of 52.23.

Their break-neck speed not only earned them a state title, but it also broke a school record set by three of the four current relay team members in 2017 at 53.24. That 2017 team consisted of Ellenberger, Jones, Reagen Johnson, and Miranda Mitchek.

The Eads boys used the track season to build athleticism and mental strength. Those boys who went out for track learned how to compete and by the end of the season many of them qualified for the state meet. One thrower for Eads, Brad Musgrave, did not qualify for state but by the end of the season had improved his form tremendously placing in a couple of meets. Look for tremendous things from this sophomore in the future.

The boys did bring a relay team to the state meet and they competed well placing in ninth place in the 4x800 Relay in a time of 9:33.08. The fact that they made the state podium was a huge gain for these very young athletes with the team consisting of two freshmen, a sophomore and a senior. Team members were Donte Sierra, Hatch Nelson, Ty Wilson, and Blake Stoker. This was Stoker’s last event of his career as the senior had a stellar track career at Eads.

The Eagles got their points from sophomore Damien Barnes who placed in both the Long Jump and Triple Jump. On Thursday, Barnes had a strong performance placing in third with a best jump of 21’ 2.5”. The 10th grader added some more points on Friday in the Triple Jump with a 6th place finish jumping 39’ 10. Not his best, but a decent performance. This young man could be a state champion if he continues to mature as an athlete.

Coach Bohlander was extremely pleased with the track season and stated, “I feel truly blessed to get to be the coach of awesome young people like what we have in Eads.”