Written by Betsy Barnett on 10 June 2020. Posted in Sports 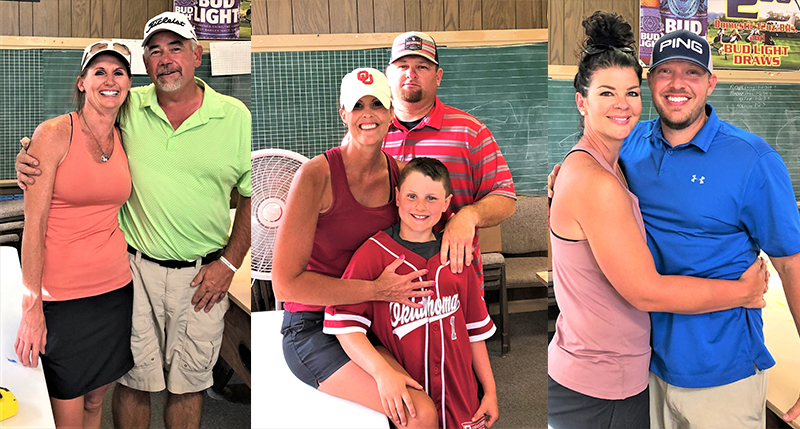 It was a miserable day to play golf on Saturday with unseasonably hot temperatures nearing the century mark and a mean 35-40 mph wind blowing incessantly out of the south. But it has been so long that sports enthusiasts, and golfers to be more specific, have been able to get out and enjoy actually doing something together that the higher-than-normal turn out for the first tournament of the season was a pleasant surprise.

Saturday’s tournament was the annual Man-Woman Scramble Tournament, a team event whereby a man and woman work together to shoot the lowest score possible on each hole. Each participant tees off and then the team chooses which ball to hit from there on out.

The tournament was won by the husband and wife team of Sean and Jalynn Oquist who used an impressive front nine performance to secure the Championship. The duo shot a -2 under 34 on the front nine with birdies on Hole 1 and Hole 6 to grab a three-stroke lead over the team of Tom and Kim Richards who shot a 37 on the front nine. Six other teams came in one more stroke behind the Richards team with +2 over 38 on the first nine.

Then, as the long day progressed the wind proved to be just too much to deal with for some. However, the Oquist team held on coming in with a +2 over 38 on the back nine to win the title shooting even par at a 72 for the tournament. Second place in the championship flight went to the team of Dustin Shipman and Shae Emick shooting a +3 over 75. Last year’s tournament winners, father-daughter duo Kyle Barnett and Reese Barnett, slipped into third place shooting a +5 over 77 for the day.

Rex and Bonnie Hyle from Cheyenne Wells defeated the duo of Justin and Kayla McLoud of Eads in a playoff for the First Flight Championship. Both teams came in with an +8 over 80 for the 18 holes. Coming in third place in the First Flight was the team of Colby and Tia Christie shooting just one stroke behind the leaders with a +9 over 81 on the day.

The Second Flight was a competitive one as the final scores were comparable to the other top flights. The champions were Brian and Stephanie Bohlander of Eads shooting a +7 over 79 on the day. There was another tie for second and third place in the Second Flight between the team of Tony Ford and Jean Weiser vs Randy and Rhonda Bohlander. In the playoff the Bohlanders grabbed the runner up spot. Both teams shot a +11 over 83 in the tournament.

The Third Flight had 10 teams competing with the Eads duo of Loren Patterson and Stephanie Hofmeister taking the championship with an 86 in the 18 holes of play. Coming in second was Tom and Lisa Head who shot an 87 on the day. The final placing in the tournament went to the team of Kenny McCormick and Liz Elmsberger coming in with an 88. McCormick/Elmsberger had tied with Jason and Kristin Huddleston in the regular tournament and it took a playoff to get to the final placing.

Overall, despite dreadful weather conditions, the course was in pretty good shape and the golfers managed to put in better than expected performances. In addition, the enjoyment of seeing old friends and getting back on the fairways and greens was more than enough to count this tournament as a huge success.