Written by Betsy Barnett on 01 July 2020. Posted in Sports 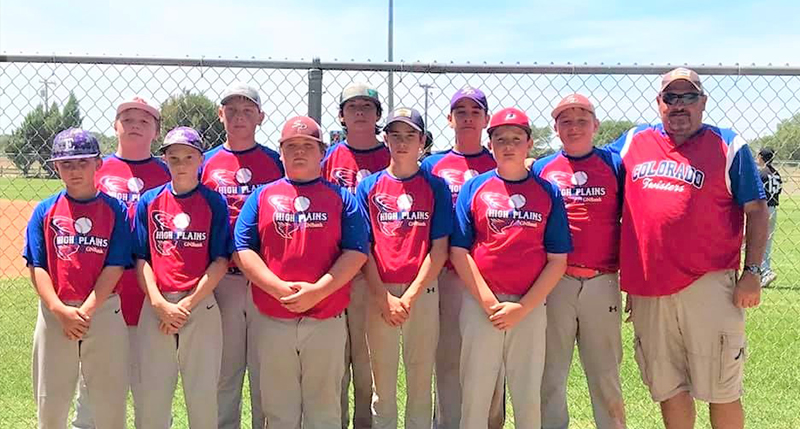 It was a tough go for the 13U Hi-Plains team in Garden City over the weekend as they went 0-4 against some very stiff competition. An impressive Liberal Rattlers team would wind up winning the tournament on cruise control. 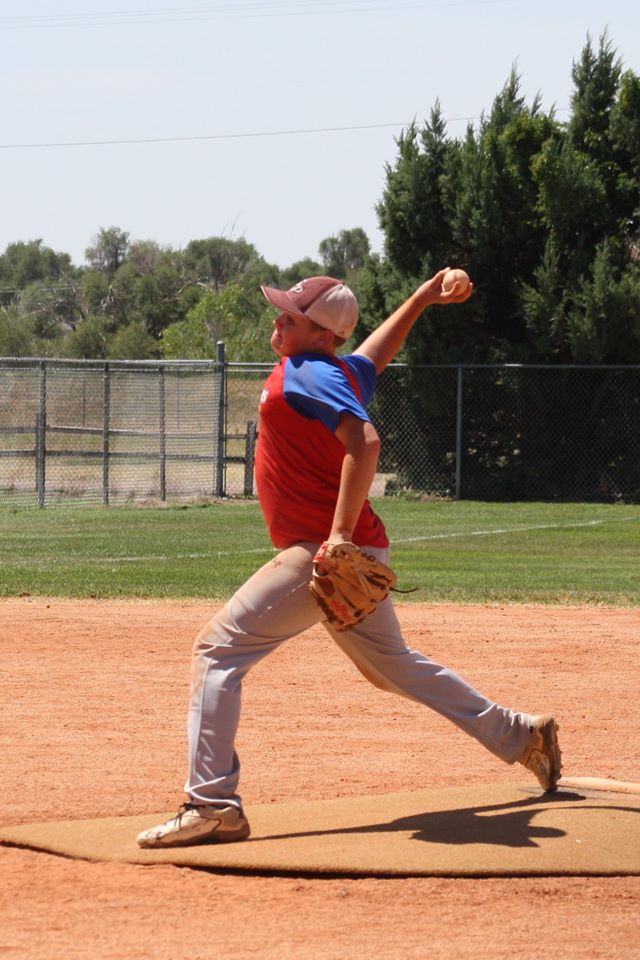 Devin Eaton from Holly was one of the key pitchers for Hi-Plains at the Jim Clanton Tournament in Garden City. Photo: Monica Uhland

For Hi-Plains, Coach Dayne Eaton took just ten players to Kansas and they all had to learn multiple positions in order to get through the pitching duties. What they lacked in manpower they made up with heart as they competed well, but just fell short against larger and more competitive programs from Kansas.

On Saturday during round robin play the HP group took on SW Sox and lost 10-2 with Holly’s Devin Eaton on the mound. In that contest the 13U boys managed five hits coming from Brennan Framel (Kit Carson), Will Pacino (Wiley), Spencer Uhland (Eads) and two from Eaton.

They would score their two runs in the third inning when Eaton pulled a walk with one out and Framel walked as well putting two aboard. Uhland then came to the plate and cleared the bases with a 2 run RBI single. With two outs, Mitchek pulled a walk to put an additional runner on, however, a final strike out ended the series.

Saturday proved to not only be very hot in Kansas, but also very challenging for the boys from southeastern Colorado as they played a back-to-back game with the best team in the tournament, the Rattlers from Liberal. There was no juice left in the tank for the HP clan as they lost in a non-starter, 17-0 to finish up the long day.

In this game against Liberal Coach Eaton threw everything but the kitchen sink at them including using five pitchers. Poncho Saenz from Holly started but was run off the mound in fast order. Case Nelson, a lefty from Eads then came to the bump to throw a total of 37 pitches. He too struggled some but also showed some good form. Eaton elected to keep everyone’s pitch count down so then went to Uhland, then Angel from Holly, and finally to Mitchek.

Offensively, HP only managed two hits off the strong Rattler pitcher. They both came in the third inning when Eaton and Framel each hit singles to get two aboard with two outs. However, the rally stopped with a third out to the next batter.

After the Saturday of round robin play, the teams were placed in the tournament bracket and High Plains, of course, would go up against the top seed Liberal in a 9:00 am Sunday start. The Rattlers again handled the HP crew easily cruising to a 10-0 semifinal win.

In this contest Framel and Saenz took the mound for High Plains. The Colorado boys had four hits in the contest with Eaton getting two singles, Pacino adding a single and Mitchek also hitting a single.

After three losses one would think that most people would be ready to throw in the towel. But, in game four the High Plains boys showed some major grit and determination just losing a heartbreaker to the SW Sox, 8-7.

Again, Coach Eaton pulled off the game by using five pitchers who worked together to throw off the Sox enough to stay in the game. Nelson started and then handed the ball over to Eaton in the second inning. Uhland then took the bump, followed by Kaden Dunlap and then Mitchek. The Sox jumped ahead right away with four runs off of four hits but then the HP group slowed them down enough to make a comeback bid. They would add a run in the fourth and two more in the fifth.

Hi-Plains was the visiting team on the scoreboard and did start the game with two runs behind singles by Eaton and Framel. Trailing 2-4, the HP group came alive in the top of the fourth scoring five runs and taking the lead. Nelson started off with a strong triple to start the at-bat and Mitchek then hit Nelson in on a single. The next two batters got the bat on the ball, but both grounded out. With two outs Eaton came to the plate and scored Mitchek with a single. Framel pulled a walk to put two aboard. Then Uhland came through with a powerful two-run double. Pacino then duplicated Uhland’s feat with another double to send Uhland home.

With the score tied at 7 apiece in the bottom of the 6th the Sox came through with a walk from the first batter up. A sac fly moved the runner to third and a ground out moved him home for the win.

The boys from High Plains will now rest a bit as they will have to get in the wheat fields for harvest. But by mid-to-late July they will be back at it. This time they hope to get to see some other teams and to take what they’ve learned into creating some wins.